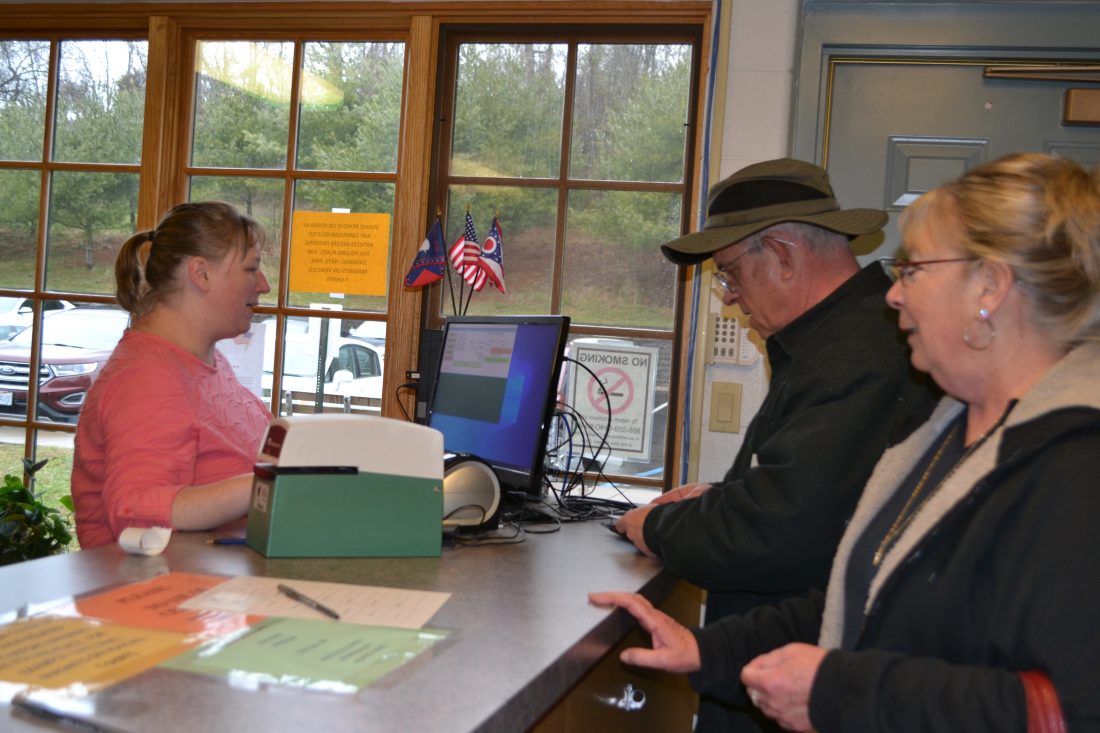 Photo by Michele Newbanks Melissa Saltzwedel signs in Devola residents Rosie Fourman and Gary Horst before they vote Wednesday afternoon at the Washington County Board of Elections office.

About 1,000 Washington County residents have voted since early in-person voting opened on Feb. 19 for the March primary.

“We’ve had quite a few people come through,” said Melissa Saltzwedel with the Washington County Board of Elections. “It’s been a mixture of people from all over the county.”

Early voting will continue until March 16, the day before the primary election, she said. Early voting at the board’s office only takes a few minutes.

When the registered voter is signed in, they are asked for their name, address and their identification. They are asked whether they associate with the Democratic or Republican party and then are led to another room where they are set up on an electronic voting machine. When the candidates are chosen, a ballot is printed out, which is taken and run through a tabulator.

Rosie Fourman and Gary Horst of Devola stopped by the board of elections office Wednesday afternoon after visiting their church for Ash Wednesday services.

“(Early voting) was very convenient when he retired,” Fourman said.

Horst said they used to vote at the Devola Volunteer Fire Department, but now their polling place is at the Washington County Fairgrounds, which has “created mass madness” as eight precincts vote there.

He said he enjoyed voting at the board of elections office.

“We came in and everybody knows what they are doing,” he said. “About a third knew what they were doing at the fairgrounds.”

He noted the confusion was during last November’s general election, when poll workers were still getting used to the new voting machines.

Registered voters who want to vote early but cannot get to the board of election office can call and request a ballot.

Emily Webb, who was working behind the desk Wednesday at the board office, said when the information is filled and mailed back for the ballot, voters must mark which political party they are associated with. She said just because a person has registered with a party, doesn’t mean they will automatically receive that party’s ballot.

“Once you pick which party ballot you want, you will be associated with that party until the next primary,” she explained. “If you want to vote on just the issues, you can be unaffiliated.”

She noted that even though a person may technically be registered with one party, they can request the ballot for another party.

Local races include Republican primaries for two county commission seats, as well as Washington County prosecutor. Marietta City Schools also has an emergency levy up for renewal on the ballot.

The primary election will be held on March 17.

Source: Washington County Board of Elections.