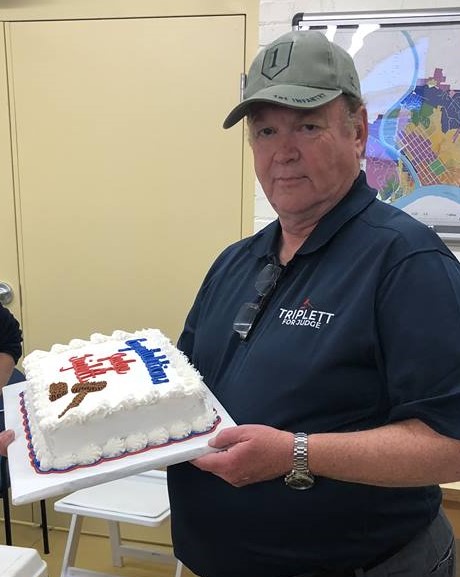 Triplett, 60, of Devola, was elected in November 2018 and replaced Judge Randall Burnworth, who was elected in 2012 to a six-year term. He was unable to run again because of age restrictions.

Triplett only served two months of the six-year term due to a brain tumor doctors found in March 2019. Burnworth has been filling the seat in an interim position until it was determined if Triplett could eventually return.

Triplett’s retirement announcement was posted to his Facebook page around 3:30 p.m. Wednesday.

“It is with great personal and professional sadness that I have to announce that I am retiring from my position as your Judge of Common Pleas Court,” he wrote. “Although it was short, I loved every minute of the job. I enjoyed the campaign trail and meeting so many people in Washington County.”

He said he is continuing therapy at home and will overcome the challenge, although not soon enough to continue to serve as judge.

“I will return to public service in some capacity in the future. I have tried all my life to do the right thing, and this is the right thing to do,” he wrote. “I want to thank everyone for their support, votes, encouragement, visits and prayers. They have been and will continue to be appreciated more than you know.”

Mandy Amos, director of the Washington County Board of Elections, said that pending approval from the Ohio Secretary of State, Triplett’s permanent replacement would be voted on in the general election in November.

“The governor has the ability to fill the vacancy until the election,” she explained.

His post received many well wishes and comments from county residents. One of the county offices that worked closely with Judge Triplett was the prosecutor’s office.

“My office and I are saddened at the news that Judge Triplett will be retiring. We were able to see significant and positive change in the short period of time that he was on the bench,” said Washington County Prosecutor Nicole Coil. “Judge Triplett has a great legal mind, and it is beyond disappointing that he will not be able to return to the position to which he was so well suited and clearly enjoyed.”

• Two months after taking office, doctors found he had a brain tumor.