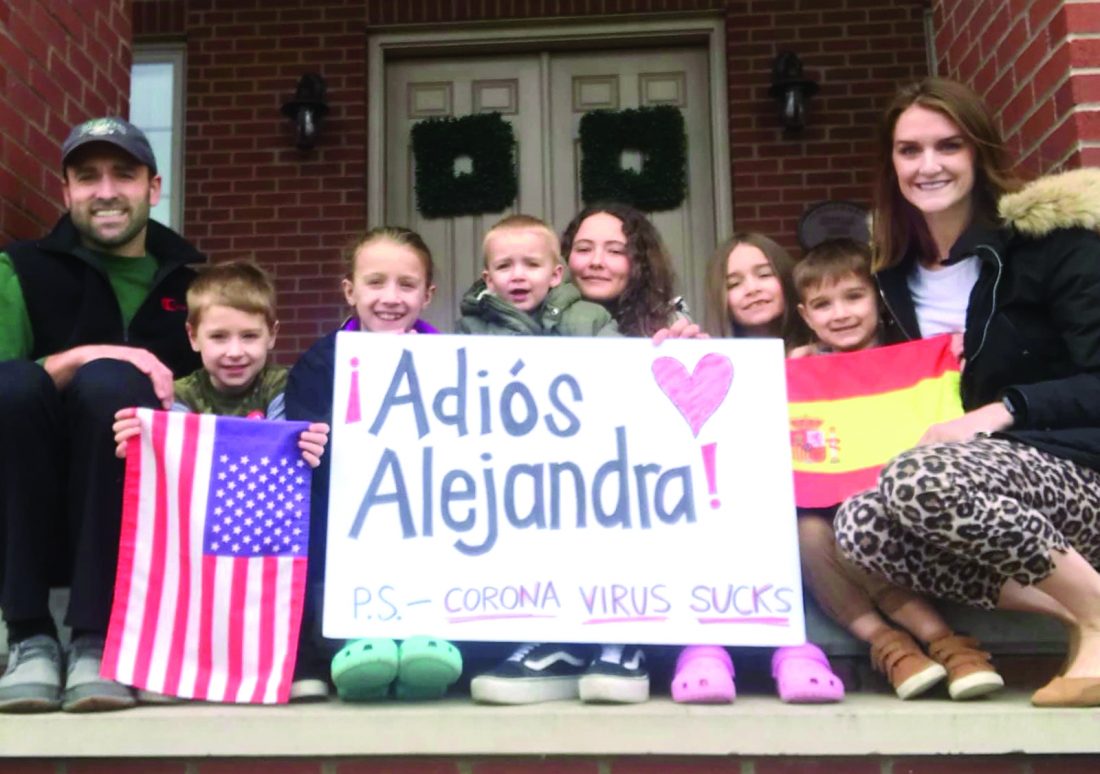 Photo provided The Huffman family says goodbye to Spanish exchange student Alejandra Gutierrez Portilla, a junior at Marietta High School who recently returned to her home in Sevilla, Spain, due to fears of the COVID-19 global pandemic.

A Spanish exchange student at Marietta High School was forced to cut her time in Ohio short after fears of COVID-19 sent her home.

Alejandra Gutierrez Portilla, 16, a junior at Marietta High School and exchange student through the ICES exchange program, was living with Jessica Huffman and her family in Belpre.

Arriving in mid-August, Alejandra was active on the Marietta High girls basketball team. Earlier this month, as concerns over a global pandemic grew and local businesses and schools began to close, Alejandra was still eager to return to her classes and friends in Marietta.

Now, about two weeks later, Alejandra is in the early days of a 14-day self-quarantine at her family’s home in Sevilla, Spain.

The COVID-19 coronavirus is an aggressive respiratory disease that spreads through droplets of saliva and can easily be transferred through coughing or touching contaminated surfaces. The virus first took hold in China in late 2019, but has since spread rapidly around the globe.

Huffman said few here thought about coronavirus in the early part of 2020.

“I first heard about what was happening in China,” she said. “I never thought it would impact us like it is now.”

“Everyone started to talk about it all the time,” Alejandra said. “It was the only thing you could hear on the news. But when I really started to worry about everything was when in Spain they started to close schools and were on lockdown, and not much later our schools (in Ohio) closed too.”

Maria Angeles Portilla Diaz, Alejandra’s mother, said as word of the virus began to spread, her concerns also grew. Her son was attending school in Italy, which soon became a battleground for COVID-19.

Spain began to shut down schools, and Portilla Diaz’s son was sent home from Italy as that country went on lockdown.

“At that moment I began to understand the scope of the problem. This was not a problem of China or Italy,” she said. “I understood that it was a worldwide problem.”

Huffman and Portilla Diaz spoke often, debating on whether Alejandra should return to Spain immediately or wait and see. Both feared a shutdown of international travel and what would happen if a member of either family became ill.

In the end, both families agreed: Alejandra needed to go home.

“We quickly packed her belongings. Many tears were shed,” Huffman said. “There was not enough time to say goodbye to all of her friends and because of social distancing she was also unable to say goodbye to extended American family members.”

Alejandra left for Spain on March 21, and when she arrived was told to self quarantine for two weeks.

“I am quarantined in one part of the house from my family, since young people can have the virus and not show symptoms and we don’t want to spread the virus to my family,” Alejandra said. “I haven’t touched any of them or seen some of them. We’ve tried to expose the least amount of people when I came home, and that’s why I haven’t seen some of them.”

So far Alejandra and her family show no signs of coronavirus, but Portilla Diaz said the event has taken an emotional toll on her daughter.

“Alejandra is having a hard time adjusting to her new reality,” Portilla Diaz said. “It was a dream for her to go to America.”

It has been a difficult adjustment for her American family as well.

“We were extremely sad to have her leave,” Huffman said. “We feel almost as if we are mourning a death.”

But Huffman said ultimately everyone agreed it was the best decision for Alejandra and her family in Spain.

“Despite me saying how sad we are, I must say that we fully support the decision,” Huffman said. “We have five children and would want them with us, too. The times are very uncertain.”

Both families are staying close through texting and social media, and there already are plans in the works for the Huffmans to travel to Spain in the summer if possible. Huffman said she and Portilla Diaz have bonded over their love for Alejandra.

“We have to unite globally in order to eradicate this destructive disease,” Huffman said. “Family is everything and I think that’s a positive that is coming to the forefront in this situation.”

“Yes, it has been awful,” Alejandra said, “but I would love to go see them next summer, and they will be a part of my life forever.”