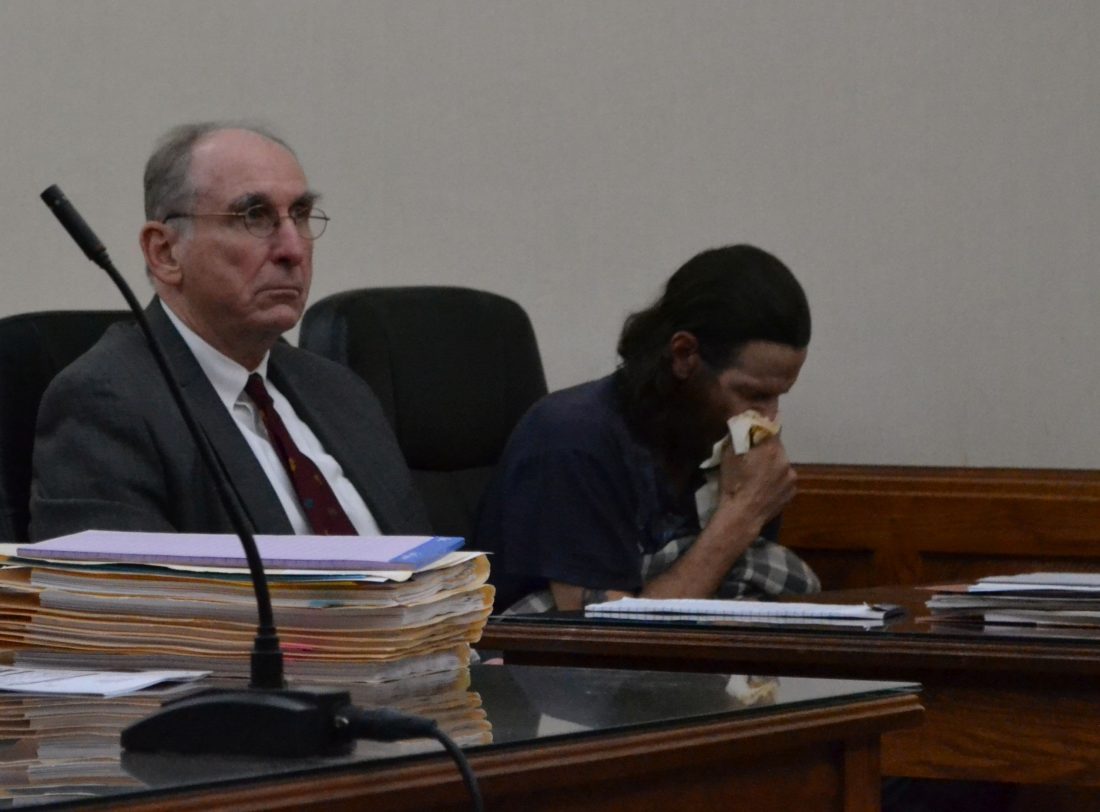 Photo by Michele Newbanks Stephen Andrew, 43, of St. Marys, W.Va., covers his face while his attorney, Jack Blakeslee, listens as Andrew was sentenced Friday morning to 30 days in jail for aggravated trafficking in methamphetamine.

Stephen Andrew, 43, of 51 Harper Lane, St. Marys, was arrested June 29, 2018, at the residence of James J. Lowers. He was originally indicted on one count of aggravated trafficking in meth, 7 grams in the vicinity of a school, which is a second-degree felony.

He pleaded guilty on Feb. 3 to the charge, and as a part of the plea bargain, the language “in the vicinity of a juvenile” was removed from the indictment, taking the second-degree felony to a third-degree felony.

Washington County Assistant Prosecutor Amy Bean said the state was recommending local incarceration, as Andrew was thought to be a bigger player than he turned out to be.

Andrew’s attorney, Jack Blakeslee, said St. Marys resident James Lowers told Andrew to do the drug transaction, although Andrew “didn’t make a dime out of it.”

“He has a seventh-grade education. He doesn’t work and he lives with his family,” Blakeslee explained. “He’s the type of person who lives in the boondocks.”

Washington County Common Pleas Judge Randall Burnworth stated the only criminal history Andrew had was a speeding ticket in 2009. Along with the stint in jail, he sentenced Andrew to one year of community control.

Andrew was booked and released Friday morning, with an order to return on May 29.

“The fact that you are going to be booked and released today, means if you don’t show up for that jail time, you will be indicted for an escape charge, a third-degree felony, which is way worse than what you’ve already got,” Burnworth said.

• Stephen Andrew, 43, of St. Marys, W.Va., was sentenced Friday morning to 30 days in jail for aggravated trafficking in methamphetamine.

•He pleaded guilty on Feb. 3 to the third-degree felony.

•He was booked and released, to return to the jail on May 29.