Rollout program for city will continue 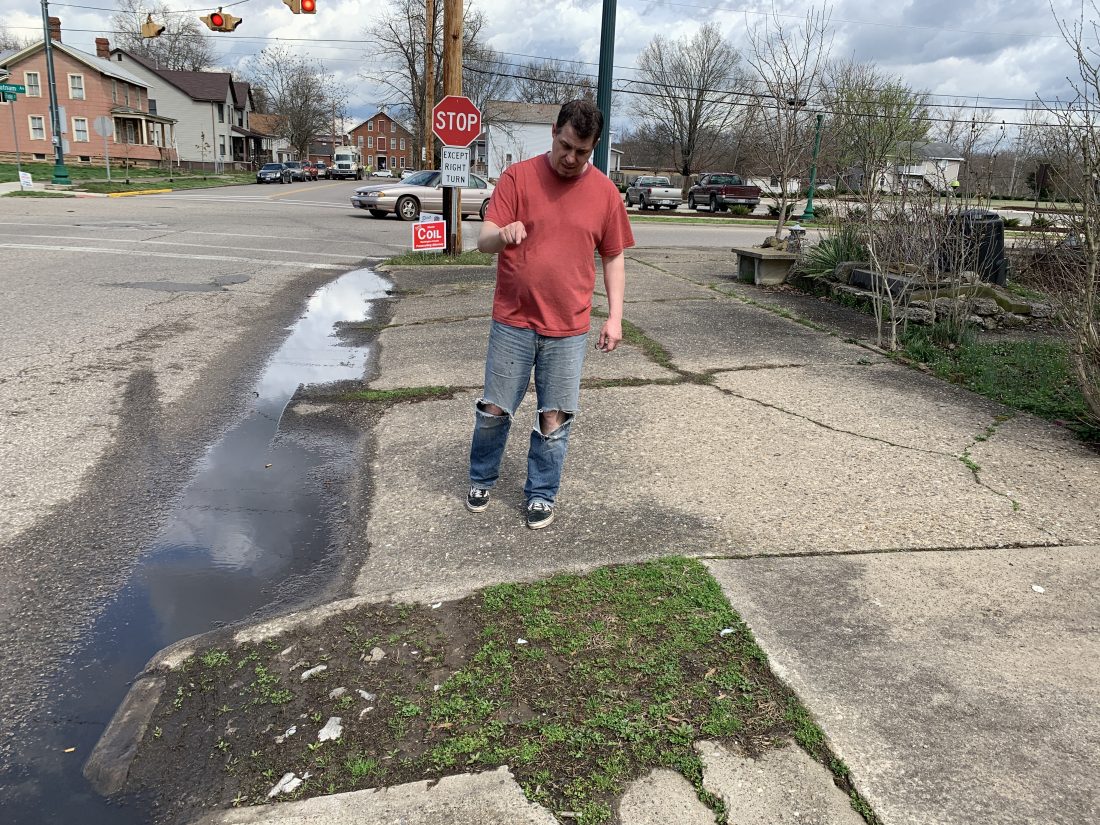 Photo by Janelle Patterson Fourth Ward Councilman Geoff Schenkel explains Friday how making the driveway to his Resolve Studios garden at the corner of Franklin and Putnam will allow for space for a bus stop sign in the city right of way.

City asset maintenance efforts press on, though the dispatch of “All out, Roll out” into the First Ward has been delayed by one week.

“I believe our first try at this went well,” said Schlicher of the March 10-13 focus on the Fourth Ward of the city, addressing streets, curbs, sewer, water, fire and accessibility issues west side of the Muskingum River.

On his 80th day in office, the mayor noted the success of each team dispatched for the new maintenance program.

Water gaskets on fire hydrants either replaced or oiled to operate more smoothly.

All curb ramps to sidewalks documented and photographed for digital recordkeeping and future project planning.

Drainage off the basketball court addressed.

“We learned so much, too, which was a goal and something we knew especially would happen with our streets crews, learning what needs to be done to fix longstanding issues that have gone on for years on our streets,” said the mayor. “We were able to do some tree trimming and a couple full removals, but realized that the equipment we rented was too big to do the job as efficiently as we’d like and we need to decide whether we want to get serious about tree trimming or get out of the business.”

Schlicher said he’d like to see more bodies moving in unison as the program continues into the other wards of the city.

“I’ve received many phone calls and Facebook messages with people amazed at what was accomplished,” he said. “We aren’t done, there are some bus stop signs that I believed we were going to get up when Mrs. (Diane) Pfile and I last talked with Community Action. But I was super impressed with how quickly the boots on the ground have listened and taken feedback back to Steve (Wetz, safety-service director) to get these done.”

Bus Stop signs are now up on Franklin Street at the corners of Market and Maple.

Schenkel said he is still waiting for two additional CABL signs at the corners of Virginia and Franklin and the corner of Putnam and Franklin.

“And for all four spots a smaller sign below is there indicating the times when people can catch a ride on the line,” he added.

Public Facilities Foreman Tanner Huffman said he still wants to return to Flanders Field after input from neighborhood members of the group Main Street West at the end of the month to add picnic tables and bike racks.

“But the drainage work we did seems to have really helped, and I’ve been wanting to pull out those old rotting posts for years,” he said Friday. “Now we can go back and lay some grass seed and asphalt shavings and add some extra parking there, too.”

The three parts of the Fourth Ward became a challenge for focus, said Schenkel.

“I think of the hill, the lower west side and the east side of my ward as three individual children, and my east side kid I think got neglected in this first roll out because we had so many things we tried to focus upon on this side of the river,” he said. “I want to do a better job for them too–my ward reaches all the way up to Sixth Street on that side of the river.”

“One spot that comes to mind is below Campus Martius where there’s a spot almost like a moon crater,” he described of needed roadwork. “It’s begging for the kind of attention that our streets and sidewalks got in this first pass on this side of the river.”

Schlicher said the next rollout is tentatively scheduled for the First Ward beginning April 7.

Then the Third Ward will see the combined teams of city departments in full force beginning April 21 with the Second Ward (including most of downtown Marietta), completing the first iteration of the program beginning May 5.

“Then the parks will get another pass-through in preparation for Memorial Day,” Schlicher added.