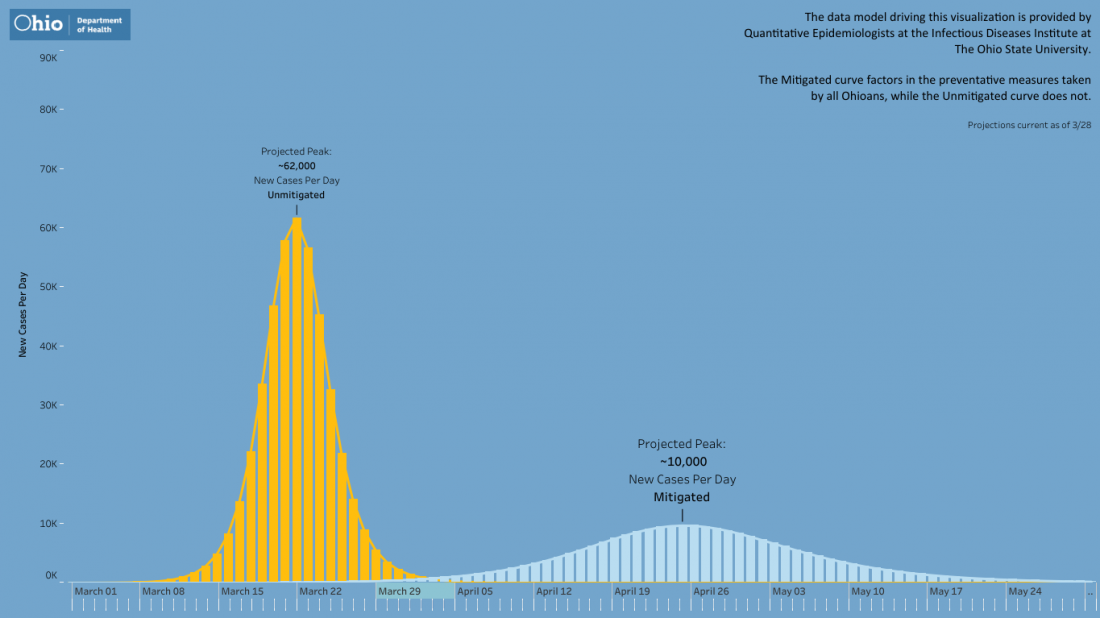 School doors will remain closed at least through May 1.

“It’s clear we’re not going to be back in the classroom before May 1,” said DeWine, nodding to projected numbers of COVID-19 cases continuing to increase throughout April.

“Is it possible that that will have to continue remotely until the end of the school year? It is,” said DeWine. “The initial decision was made for the safety of students, but also frankly for every Ohioan.”

Marietta City Schools Superintendent Will Hampton responded Monday saying the focus this week for his staff is getting connected with students that haven’t made contact with their teachers yet.

“That order came while we weren’t in school yet, so we’re all learning on the fly how to provide for our kids,” said Hampton. “This is just such a unique moment in time… all of our expectations need to be different as well. We’re learning and feeling our way through this.”

DeWine acknowledged Monday that school districts with lower-income populations and those in less metropolitan areas may not as easily continue through April without brick-and-mortar instruction.

Hampton said packets for a paper-pencil version of review and enrich lessons are underway for the district.

And to plan for April, the superintendent said, he’s also looking to the rest of the school year.

“We’re not going to go back to school, that’s my gut telling me. I’ve been telling my people all along to plan on more than the first two weeks he gave us. Think forward in two-week chunks,” said Hampton. “Establish a (reliable) connection with your students… some teachers are using other kids to connect with the ones they haven’t heard from yet.”

Then, he said, establish a routine.

DeWine also telegraphed the potential for another order this week — this one concerning parks, playgrounds and basketball courts.

“If people want to walk in the state parks, they have ample space to practice distancing,” said DeWine. “But any day the weather gets better you are seeing people congregate.”

Marietta Police Chief Rodney Hupp said Monday that he has told his patrol officers to “be watchful of large groups of congregating youth.”

Some parents have complained to the mayor’s office that youth now not in school have taken to the city skate park, while other parents have voiced worry and anger over families using playground equipment.

“Frankly some of the mayors have taken the action of removing the (basketball) rims,” DeWine described. “This is a work in progress.”

“It’s designed to help working Americans that are struggling to make ends meet,” said the congressman. “If you have a social security number, you’re going to get a check. That includes social security beneficiaries.”

Marietta Mayor Josh Schlicher said no considerations or conversations have yet been made to close the city’s border with West Virginia. And Marietta Fire Chief C.W. Durham emphasized the need for detailed descriptions when calling 911 in a health emergency.

After the broadcast, Durham also spoke with the Times, further explaining ways that families and individuals can help first responders during the national crisis.

“Minimizing going out to your individual needs, but also only send one person into the store if you’re able to,” he said. “And coming home, focus on (removing) opportunities for cross-contamination.”

Durham said his staff are working to not take home the virus by keeping their work gear at the stations.

“All our department clothing and boots stay here, so I go into work and leave work in street clothes,” he described. “Doing things like that, simple things like when you come in, make sure you wash your hands. Leave your shoes at the door. And it’s a great practice, too, to eliminate the risk of flu.”

The fire chief also said that all patients transported by the department are being given respiratory protection.