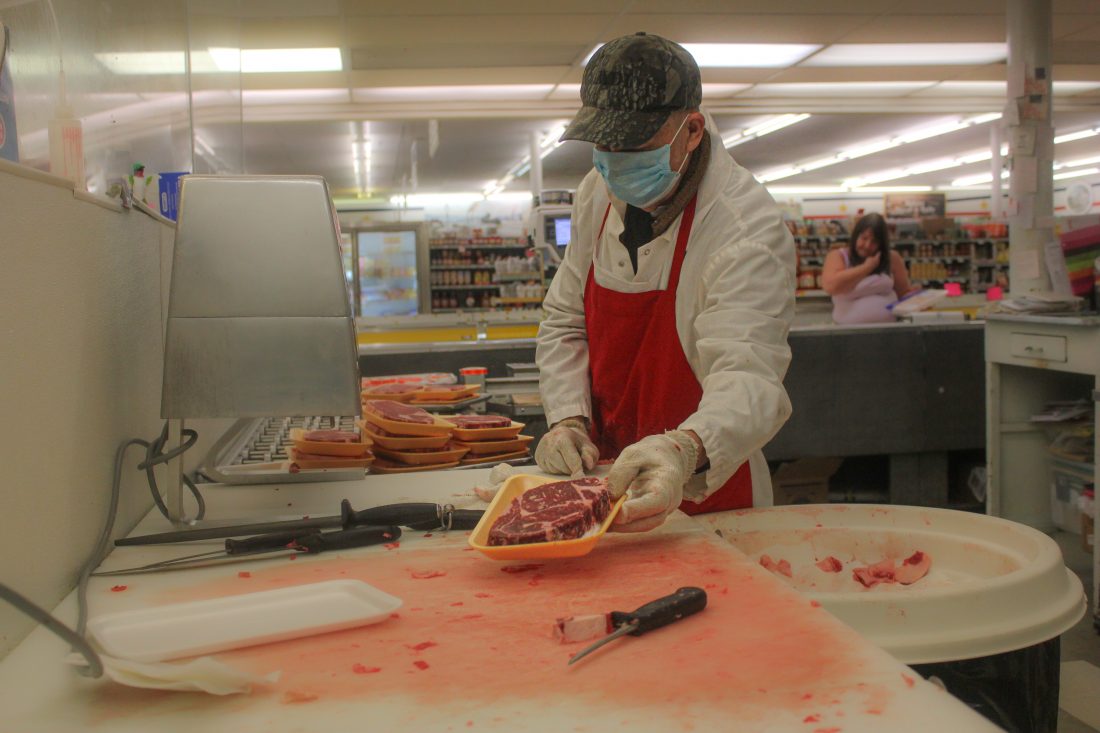 Photo by Janelle Patterson Gary Wells, 67, of Marietta, places cuts of ribeye into packages for sale at Warren's IGA on Friday, 50 years and one day after his first day on the job in the company's meat departments.

Two days after he graduated high school in 1970, he donned the same work attire he still puts on today.

“I didn’t like school much so college wasn’t for me,” said Gary Wells, 67, of Marietta.

“That was before it was sold as the doctor’s office it is now,” he explained.

That first year was one of learning, he said, as he spent the majority of time at the grinder and disassembling quarters of beef.

“It’s simpler now that we don’t have to take the whole thing apart,” he chuckled. “And plenty lighter.”

But lightening the load has only made Wells faster, much to the chagrin of fellow employees he still quietly waltzes circles around.

“On those meat sale days all the young guys will be chasing after him, he’s the kind of employee you wish you could do more for because he’s so good,” said Mike Morrison, manager of Warren’s IGA. “Back when he was at Food-4-Less he would use his vacation there to come to another store’s meat department and cover someone else’s vacation time.”

Wells’ 50 years at the blade, cutting ribeye, sirloin, chicken and any other slice needed between Hildreth, Seventh Street, Food-4-Less, Beverly, McConnelsville, Newport and now Colegate, is double the amount of time even the most loyal business employees usually spend with a company. Still, he doesn’t plan to retire anytime soon.

So for now, you’ll find the spry man quietly at work behind the meat counter at Warren’s IGA, three days a week in Marietta.

• Gary Wells, 67, of Marietta, celebrated 50 years as a meat cutter for Warren’s grocery stores this week.

• Wells has been based at the Hildreth Lane, Seventh Street, Pike Street and Colegate locations.

•Wells has also filled in at the family groceries throughout the Mid-Ohio Valley.