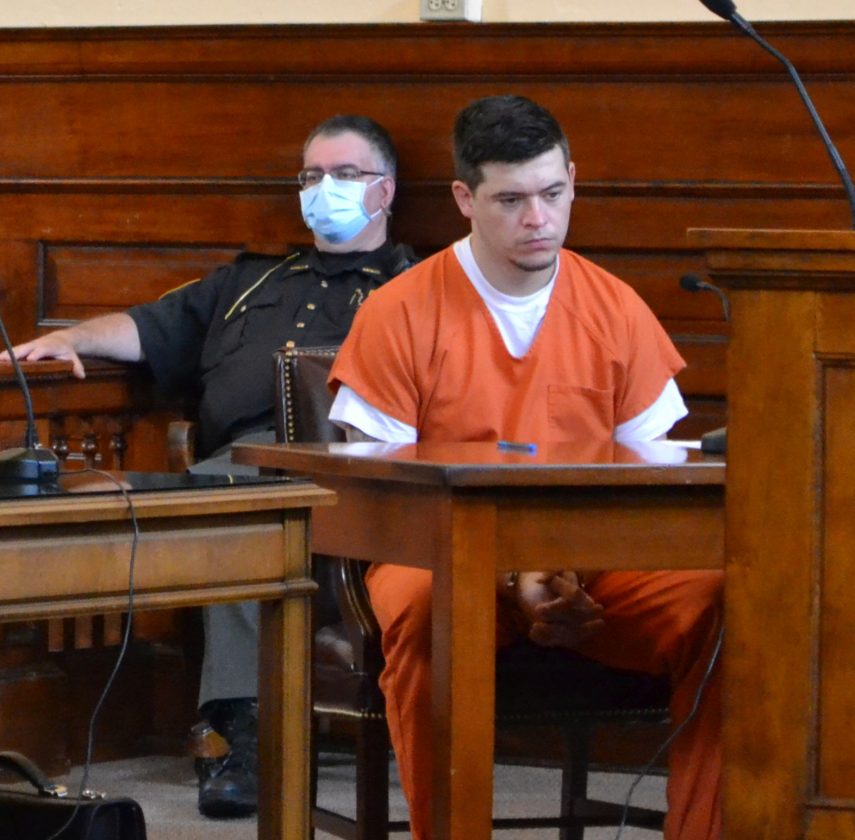 Photo by Michele Newbanks Anthony Curry sits quietly as he is sentenced to 90 days in jail for breach of his recognizance bond Wednesday morning at the Washington County Courthouse.

A Waterford man who skipped out on his sentencing in April was sentenced Wednesday morning to 90 days in jail for breach of recognizance bond.

“He was here for a short time, walked down the stairs and out the door,” said Washington County Assistant Prosecutor Joe Derkin.

He had pleaded guilty and was being sentenced for third-degree felony aggravated trafficking in methamphetamine.

“I was scared. My grandmother was in bad shape,” he said during his sentencing Wednesday. “I was scared and I wanted to see her. She passed the second day I was in here (after being arrested again on May 16).”

He said he was on methamphetamine when he was at the courthouse for sentencing, but he wanted help for his drug use.

Fowler filed a bill of information Wednesday for his client, waiving Curry’s right to a grand jury for the breach of recognition bond. Curry told Washington County Common Pleas Judge Mark Kerenyi he wanted to do whatever he needed so he could get help.

“I do appreciate that Mr. Curry wants to get help,” Derkin said. “If we keep giving people break after break…walking away was a slap in the face to the court.”

He said a prison sentence would be the best thing for Curry, but he agreed he needed help.

“Judicial release is good in some cases and this would be one of them,” he added.

Fowler said Curry was scared of change, which was the reason he left before sentencing. He suggested county jail time and treatment at the STAR facility, for which Curry had already qualified.

“I propose two or three years of community control to help him achieve a better life,” he said.

After Curry spends his 90-day sentence at the county jail, he will be sent to STAR for treatment. He was also sentenced to three years of community control.

• Anthony Curry, 31, of Waterford, was sentenced to 90 days in jail for breach of his recognizance bond.

•He was also sentenced to 120 days in jail for aggravated trafficking in methamphetamine.

•Curry will be transported to the STAR Treatment Center in Franklin Furnace.

•He pleaded guilty on March 2 to aggravated trafficking.