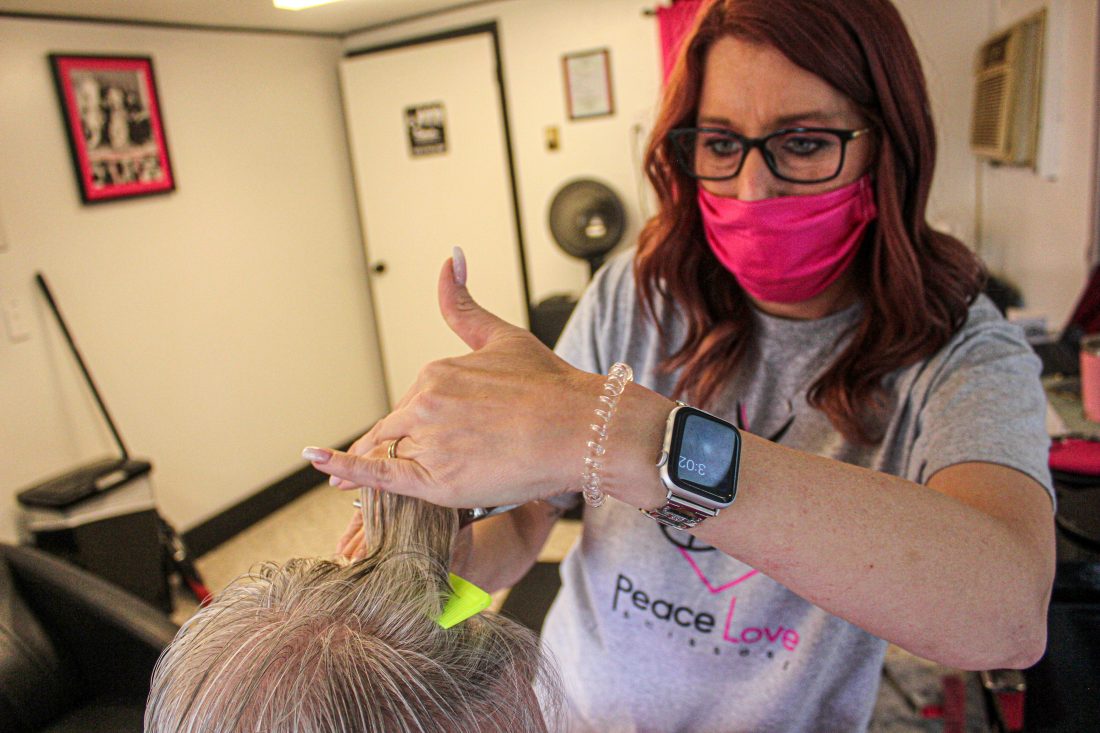 When Caldwell resident Trina Rataiczak started renting the former Beauty Barn location in February, she had hopes of opening her salon in March. She was finally able to open Peace Love Scissors on May 15.

She and her husband worked on renovating the 328 Gilman St. shop and they were ready to open, but then the COVID-19 pandemic hit and the state shut down all hair salons.

“It worked because I’m busy right now,” she said. “Busier than I might have been then.”

Rataiczak got her license in 1998, right out of high school. She’s had other jobs since then, such as working at Lori’s in Caldwell as a waitress, but she said she missed working on people’s hair.

It took a bit for her to settle on a name, but her husband asked her ‘well, what do you love?’ She told him she loved peace and love. Coming up with a name was also about finding an available website, she said.

The shop was fully renovated and the dated colors were replaced with hot pink, black and white. She said she enjoyed waitressing, as it was convenient for her family, but having a salon was her dream.

“If I go back, I’m going to go back and do it the way I want to do it,” she said. “My husband encouraged me and helped me along the way.”

When she took time off to waitress, she realized how much she loved meeting new people.

“I love meeting new people and making them feel good about themselves. Make them feel comfortable about who they are,” she explained. “That’s probably my favorite part of it.”

She said she convinced herself she was burned out as a hair stylist, but when she got away from it, she realized she just needed a little break.

“It put it into perspective,” she added.

She lives in Caldwell with her husband and two of their seven children. Her love of small towns is why she decided to open a shop in Harmar.

“Our daughter works at Monkey’s Uncle Tattoo and she told me about the empty location,” Rataiczak said. She wants to eventually add another stylist, but with the small shop, social distancing would be difficult.

“We just love Marietta. It’s just beautiful down here,” she said. “It’s such a nice community. I thought there was way more people here (than in Caldwell).”

She said being around the corner from the tattoo shop is a benefit, as her daughter, Meg, just had a baby three months ago.

“It’s our first grandchild, so I’ll be able to see him,” Rataiczak said. “That helps too.”

So far, her first week in business has been busy. She said she didn’t start booking appointments until the day the doors opened.

“I think I’m excited to see what everyone’s done to themselves (while salons were closed). I’ve seen a couple of people and they haven’t been bad,” she said with a laugh.

She said she tries to be competitive with her prices, with $12 adult hair cuts, $10 child hair cuts and $30 perms. The cost for foiling and highlighting starts at $55.

“Right now, I’m open by appointment. I have time for walk-ins, though,” she said. She plans for the shop to be closed Wednesdays and Sundays, and the easiest way to make an appointment is by calling 740-538-5556. Appointments can also be made through her Facebook page or website, peacelovescissors.com.

Much of her initial business has come from Facebook posts, including ones from Monkey’s Uncle Tattoo owner Chase Chovan.

“For us, it’s great,” he said. “(Rataiczak’s) stepdaughter, Meg, is an artist here. It’s nice that we have a corner thing. It’s a perfect symbiotic relationship.”

He said it’s also great having more business in Harmar and the updated shop is a welcome addition.

“It’s a small space but they utilize every inch of it,” Chovan said. “It’s super clean with new equipment. I made a couple of posts and a ton of people have reacted to it. The storefront and logo are really nice.”

• What: Now open for business.