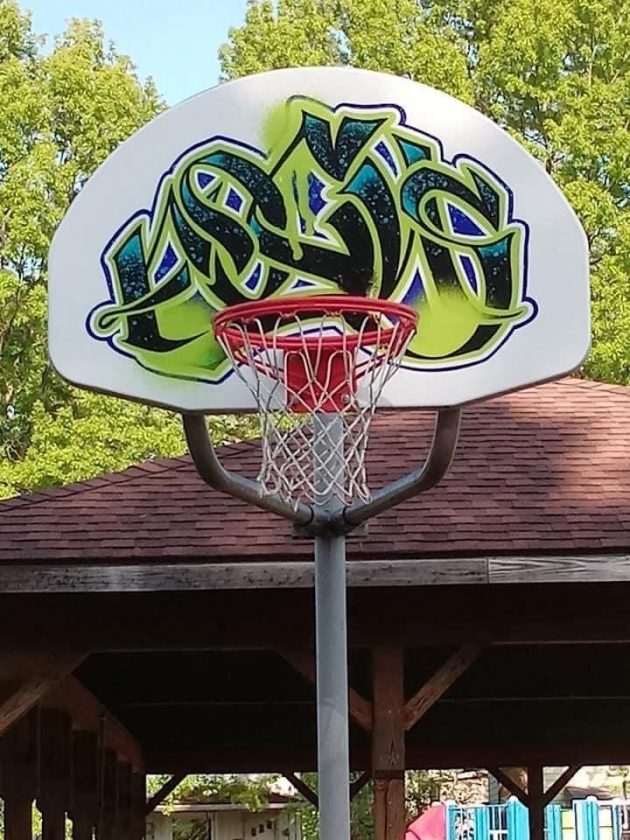 Photo courtesy of Geoff Schenkel Inspirational messages are now adhered to the backboards of the Flander's Field basketball court after neighborhood residents and businesses worked through the city administration and council for permission to beautify the city-owned assets with designs inspired by lower west side neighborhood children.

Any person, business, group of individuals, businesses or nonprofit organizations may seek city authorization to close a portion of a street block, an entire street block or a number of city street blocks.

“There is an existing process for seeking (a street fairs and festivals) permit and a council rep making (a) minimal effort can walk an applicant through this process in a step-by-step approach,” Councilman Geoff Schenkel explained to members of Marietta Main Street Friday. “To me, it makes sense for Main Street to seek the street closure permit, but it could be anyone.”

Schenkel listed other likely partners or sponsors of such events including the Marietta Area Chamber of Commerce, the Marietta-Washington County Convention and Visitors Bureau and the Southeastern Ohio Port Authority.

“There are options,” he said. “I can envision one piece of legislation being requested with a calendar of closures scheduled between June and December with a sunset clause attached. Once those days and times are determined, planning how to use the time and space allotted becomes the next question.”

“It’s not unlike what I was able to help Jackson (Patterson) and Main Street accomplish by requesting legislation for the acceptance by the city of a donation made from everyone involved in Jackson’s Flanders Field public art project,” Schenkel explained.

Installation of the graffiti-style inspiration backboards in the Harmar park was completed Wednesday by contracted local artists after organizer Jackson Patterson approached first the mayor’s office and then Marietta City Council for approval of the upgrades to the city-owned basketball backboards at Flanders Field.

Council then passed formal legislation this year authorizing the donation of services to adhere the stylized inspirational words to the city assets.

“Which we brought through council committee with the legal help of Paul,” Schenkel explained.

Schenkel and Bertram advised this week that the use of a 2015 addition to state law concerning a designated outdoor refreshment area where alcohol could be served within an enclosed space is neither needed for quick stimulus to local economy, nor legally applicable to downtown Marietta.

A closed-door discussion of DORA by members of Marietta Main Street prompted this legal opinion.

Cristie Thomas, executive director of Marietta Main Street, which annually receives $15,000 in federal Community Development Block Grant funds from the city of Marietta, declined five Times public records requests between Wednesday and Thursday for a list of names of the participating individuals at the meeting.

“I strongly disagree that Marietta Main Street is subject to Ohio Sunshine Laws,” Thomas responded via email after the requests to her organization.

Bertram stated Thursday that any not-for-profit organization that accepts government funds is subject to the same laws which govern townships, municipalities, county officials and other such government or quasi-government agencies.

“What this is, is public business,” said Bertram. “Private entities are considered public bodies for purposes of the open meeting act when they are organized pursuant to state statute and statutorily authorized to receive and expend government funds for a governmental purpose.”

Bertram also said Friday that Marietta City Council was in direct involvement in the reorganization and creation of Marietta Main Street from its former name and designation as ReStore Marietta.

Bertram said Marietta Main Street is not the first local not-for-profit organization which has fought Ohio Sunshine Law without success.

Bertram provided via Times public records request Friday the letter provided to the CVB in that instance.

“I believe The Marietta Times records request must be fulfilled,” Bertram quoted his 2014 letter to retired Finance Chairman Tom Vukovic concerning the CVB.

“That’s why you have a city councilman on your board as an ex-officio, anything you give to him, anything you say to him is a matter of public record,” said Bertram. “You are receiving public monies and have received public monies. You are subject to public scrutiny.”

Marietta Main Street has taken city funds not only for its annual flower baskets project on city-owned light posts, but also for the Enrich Marietta development study group begun in 2019 as a joint venture with Marietta College, Peoples Bank, Marietta City Schools, the Memorial Health System and other similar local employers and developers.

“You come and report to the city of Marietta and there’s a person on your board that’s a city councilman (ex-officio),” Bertram further explained.

By that reasoning, he said, all business conducted and records/documents produced by the Enrich Marietta steering committee is public record.

Per state and federal law, without the full compliance, the nonprofit may be subject to losing its present city funding by a violation of their city contract for reimbursement of the downtown flower baskets.

These flower baskets were also a point of Times public records request this week after both a city employee and Schenkel confirmed that city staff were asked to volunteer labor to hang the baskets instead of Main Street’s contracted agreement with Huck Greenhouses for $750.

Thomas denied any contact with city staff to coordinate or provide volunteer labor.

The action may also prove the nonprofit ineligible for future government-funded projects and joint ventures with other organizations receiving government funding.