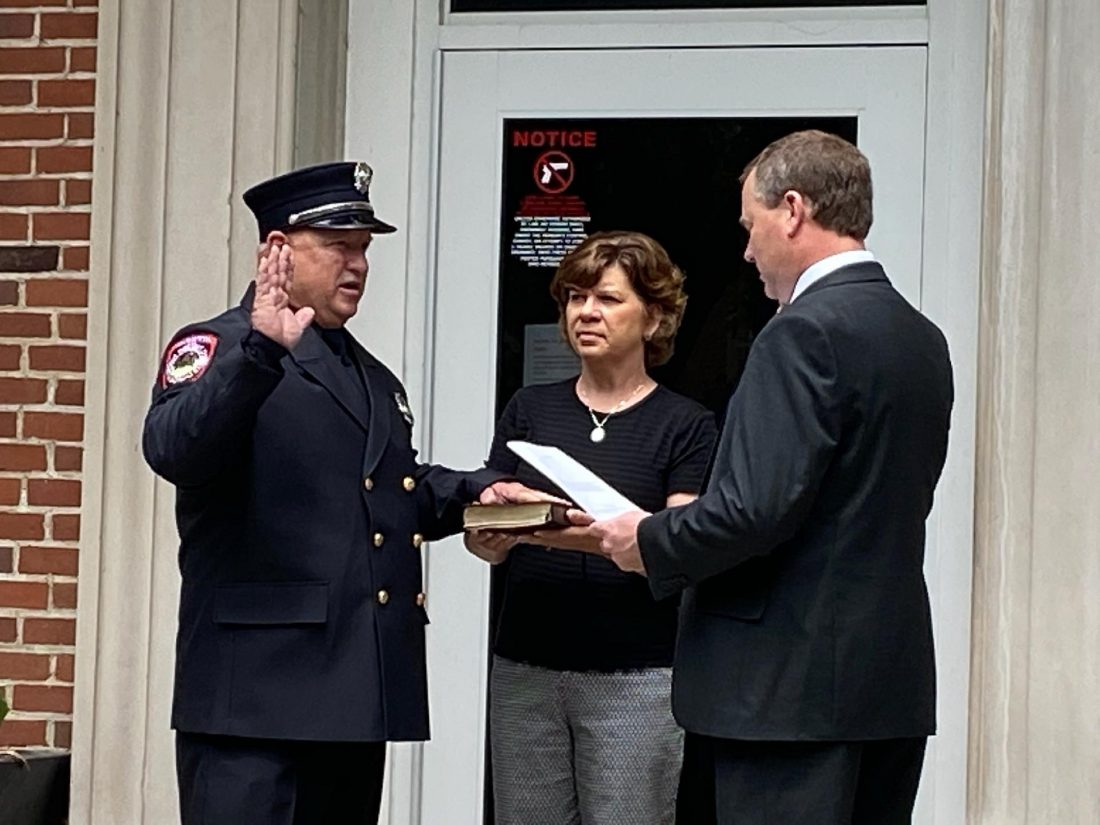 A love of helping people is what Marietta’s new fire inspector said led him the new role. Forrest “Frosty” Schneider was sworn into the position Thursday.

The Marietta resident started at the fire department as a firefighter and EMT on June 14, 1999, and said he liked that he got to interact with people.

“I like meeting new people. It’s nice to be able to meet people and help them,” he said. “You have to have a desire to help people (to be a firefighter).”

Schneider took over the job after the retirement of long-time fire inspector Richard Stewart.

For promotions within the fire department, you have to take the civil service test and have seniority, said Fire Chief C.W. Durham.

“One thing that was beneficial was he spent time with Richard,” said Durham. Schneider got to learn what he could from Stewart before his April 30 retirement.

“I think he’ll do an excellent job,” said Durham. “He’s got the people skills and can explain why he’s there…to make them safe and their customers safe.”

The biggest part of the fire inspector’s job is fire prevention. Schneider said he’ll try to make businesses safe and in compliance with the fire code.

“Fire inspection is the smallest part of the job,” Schneider said. “If you have more fire prevention, you have fewer fires.”

There are approximately 1,100 businesses in Marietta that must be inspected. Alarms need to be checked annually, as well as exit lights.

“Anything that could deter them from getting out of the building (must be noted),” Schneider said.

Now he works alongside Assistant Chief Rodney Scott, where he’ll put to good use the guidance he received from Stewart.

“I’ll put more fires out as a fire inspector than I would as a firefighter because of fire prevention,” Schneider said. “Richard’s told me that for years.”

When Schneider was sworn in by Marietta Mayor Josh Schlicher, Schneider’s wife, Missy, was by his side.

Schlicher said Schneider was a good choice for fire inspector.

“Frosty’s been with the department more than 20 years, so he’s got the field of experience,” he said. “He gets along with everyone and has a positive attitude. I think he’ll do great in the position.”

• Frosty Schneider was recently promoted to fire inspector at the Marietta Fire Department.

• He was promoted after the former fire inspector, Richard Stewart, retired on April 30.

• Schneider will celebrate 21 years with the fire company on June 14.