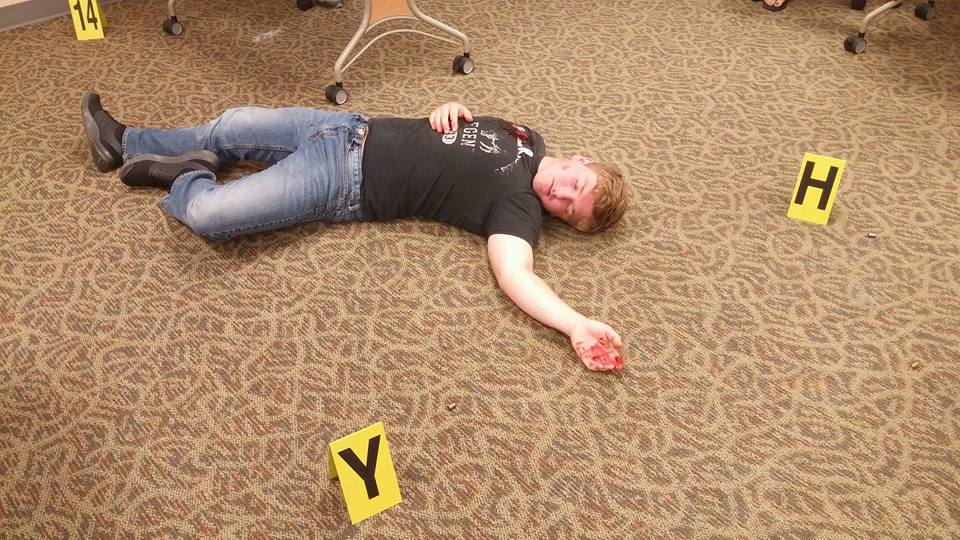 “Demonstrators had dynamic displays and experiments to engage the students to get excited about science and engineering,” said Mary Lou Moegling who has been involved with the planning of YES Days since its inception in 1993.

Stations included a crime scene investigation/forensics, texting and driving simulation, insects as a sustainable food source (including free grasshopper taste testing for the brave), polymer creation experiment, and many more.

The WSCC’s Criminal Justice Club session included a staged crime scene complete with bodies. Students were encouraged to review the situation, collect evidence, and develop plausible motives and culprits. Daniel Newton, who was part of the presentation and action in the session was pleased with the engagement from the students. “I really enjoyed being able to entertain the students. I could tell that the students were having a great time from the laughter and all the great questions. I would be more than happy to have the privilege to do it all over again,” he said.

Moegling reminisced about the annual event and marveled at how the program has grown and evolved. With pride, she explained how many of the presenters at this year’s YES Days had come full circle as “nearly a third of our presenters had been participants as middle schoolers.” Evidence, she said, that the program is making an impact on our community.

"If you do a good job right now, today, then tomorrow will take care of itself. That's all you can do." Coach Ryan ...

Maeghan O’Neill, 14, of Marietta, has been accepted to and this summer will attend the prestigious Interlochen ...

Belpre High School January Students of the Month Hannah McDaniel is the daughter of Todd and Nikki McDaniel. She ...

Erb Ben and Ashlee Erb of Beverly announce the birth of their daughter, Brinlee Rene Erb. She was born at 7:58 ...