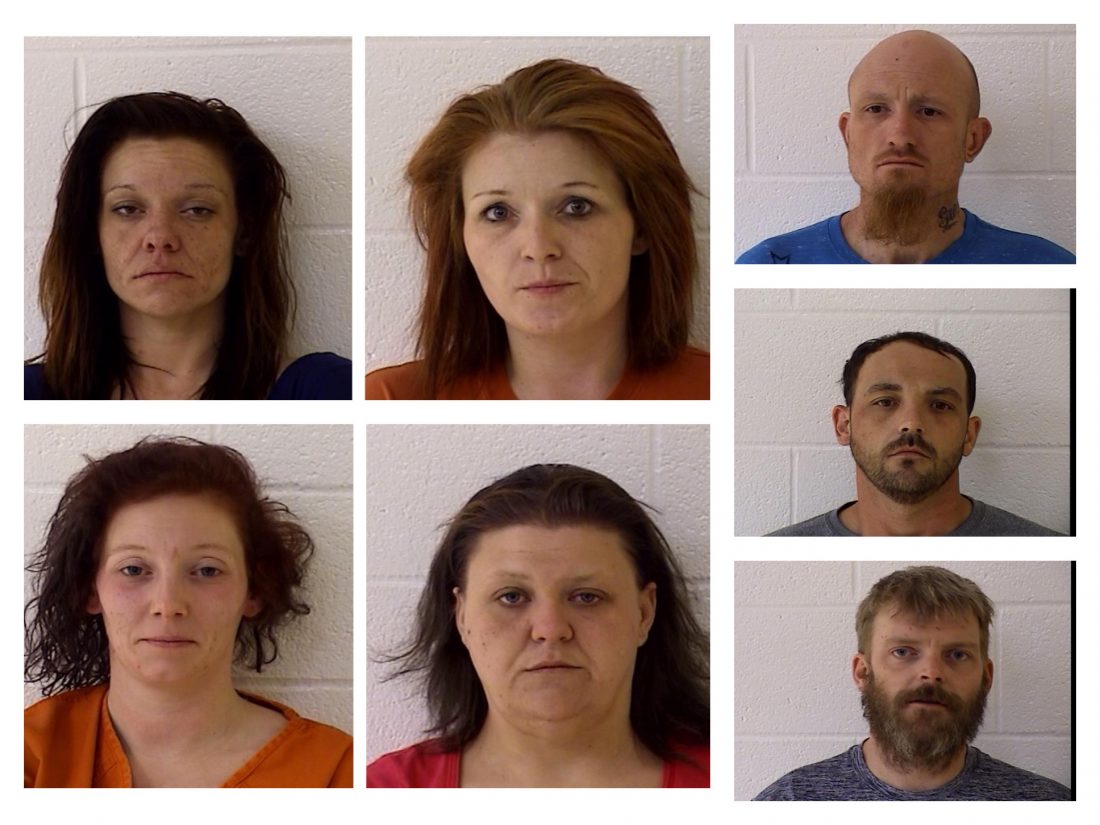 According to affidavits provided by the Washington County Sheriff’s Office, the group allegedly broke into two storage units of the 676 Mini Storage in Warren Township and last week renters of those units notified the sheriff’s office of thefts.

Household appliances, furniture, electronics, clothing, other personal property and family heirlooms were identified as missing and the affidavits say witnesses took photos of suspicious loading at the units on May 3.

On Saturday, the affidavit explains, a search warrant for 814 Warren St., Marietta, resulted in the location of much of the personal property missing and an alleged confession from Joel Johnson, 39, of that address.

“Joel said on the first occasion he went with Chevelle Sarver, Austin Wright and Ashley Mayle where Austin and Ashley took a TV after Austin picked the lock,” reads the affidavit written by Deputy Duane Painter. “On the second occasion Joel said he went with Cameron Cowan, Ashley McAllister, Chevelle Sarver and Kaylan Wallace where (Joel) cut the lock using bolt cutters and they took several items including a washer and dryer.”

All of the named defendants, except Cowan and McCallister, appeared via video-conference from the Washington County Jail.

They were led into the conference room in smaller groups of three, which the corrections officer explained was due to quarantine measures of the coronavirus pandemic.

All of the defendants were also masked while on the video feed.

The seven defendants face fourth- and fifth-degree felony charges related to the alleged thefts and located missing property from two units of the 676 Mini Storage in Warren Township.

If convicted of a fourth-degree felony, Ohio Revised Code dictates incarceration of six to 18 months and up to a $5,000 fine.

Likewise, if convicted of a fifth-degree felony, ORC dictates six months to one year of incarceration and up to $2,500 in fines.

All of the accused reported no current employment, and according to public defender Kyle Davis, qualified for state-subsidized representation.

Sarver’s bond was set at $500, and one condition of her bond includes no contact with her fellow defendants.

When Wallace’s bond was set at $2,500, due to past failures to appear as noted by Coil, Wallace interrupted the judge.

“That’s not fair,” said Wallace, before being silenced by Davis.

Welch noted Mayle still has an aggravated assault case open which was previously bound over to the Washington County Common Pleas Court for consideration by a grand jury, but Coil noted due to the pandemic that body has not yet heard the case.

Welch assigned a $2,000 bond for Mayle with the same no contact terms, only excluding co-defendant Austin Wright, whom Mayle said was her boyfriend.

Wright’s bond was set in total at $3,000, in consideration of a contempt of court past charge.

Welch noted an outstanding warrant on Streight from Chillicothe for theft and a failure to appear.

Welch noted two recent cases of Johnson’s that are still unresolved from February 2019 and March of this year.

“This allegation arose while he was out on bond,” she noted. “Given the nature of that with other issues pending, bond is set at $5,000.”

Ashley McAllister, of 111 Putnam St., Apt 2, Marietta, was not arrested over the weekend and did not appear before Welch on Monday.

According to Washington County Sheriff Larry Mincks, McCallister will be charged with both the fourth-degree felony of receiving stolen property and three counts of breaking and entering, a fifth-degree felony.

Cameron Cowan, 27, last known address 622 Second St., Marietta, was also not arrested over the weekend and may face similar charges.

“There will be additional arrests from this, it’s still under investigation,” said Mincks.

Reports/Marietta •On May, 13 officers began an investigation into a possible sex crime involving a ...