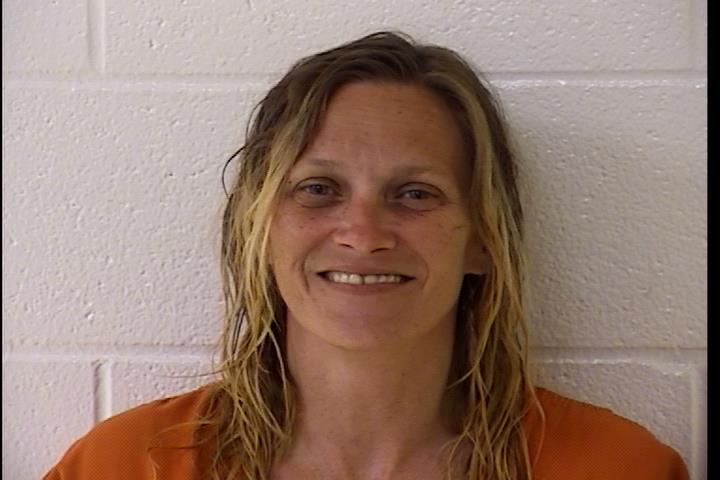 Two McFarlan, W.Va., women were arrested Wednesday in Washington County after they were found with a kilo of methamphetamine.

A traffic stop at milepost 10 on Interstate 77 led to Mindy Sue Jane Carder, 34, of 55 Lot Lane, and Chandra Renea Jenkins, 39, of 121 Lott Lane, being charged with first-degree felony possession of drugs.

According to the Washington County Sheriff’s Office, a detective was stationary on Interstate 77 when a vehicle driving southbound in the driving lane slowed abruptly, causing a commercial tanker truck to move to the left to avoid hitting it from behind. The vehicle passed the detective, and he was able to see the two female occupants. A traffic stop was initiated as the West Virginia registration had expired two days earlier.

The detective made contact with occupants on the passenger side, advising the driver of the expired registration. The driver, Carder, replied she had forgotten to renew it. She reportedly stated she and Jenkins were out riding around, but they gave conflicting stories when answering questions. The detective observed a torch and possible THC pen in plain sight.

A second detective arrived on scene and was asked to walk K-9 Rita around the vehicle, getting a positive indication on the vehicle. Prior to completing the search, Carder stated she had a meth pipe in the vehicle. The detective then obtained the item and found methamphetamine, marijuana, two Xanax pills and drug paraphernalia. Also located were two plastic shopping bags under the seat with two large packages of suspected methamphetamine.

Washington County Sheriff Larry Mincks said the two packages of methamphetamine were in the shopping bags equaled 2.2 pounds, or one kilo.

He said if the drugs had anything else added, it would increase the price.

“If it were cut once, the price could be $250,000 by the time it was sold in smaller quantities on the street,” he explained.

Carder and Jenkins were placed under arrested and placed in patrol vehicles for transport to the Washington County Jail. Prior to entering the jail, Carder presented a small baggie of suspected methamphetamine she had removed from her pants.

Both women appeared in Marietta Municipal Court and each are being held on $200,000 bond.

Reports/Washington County A deputy conducted an investigation on Wednesday into a stolen rototiller. This case ...

Reports/Washington County • Deputies were dispatched to 210 State Route 339, Belpre, on Sunday for a report of ...

Reports/Washington County • A deputy began an investigation June 30 in Liberty Township into fraudulent ...

Reports/Washington County •On Monday, the dog warden requested a summons be issued to Iris R. Beckford, 40, of ...