Local schools step up to meet PPE needs during pandemic 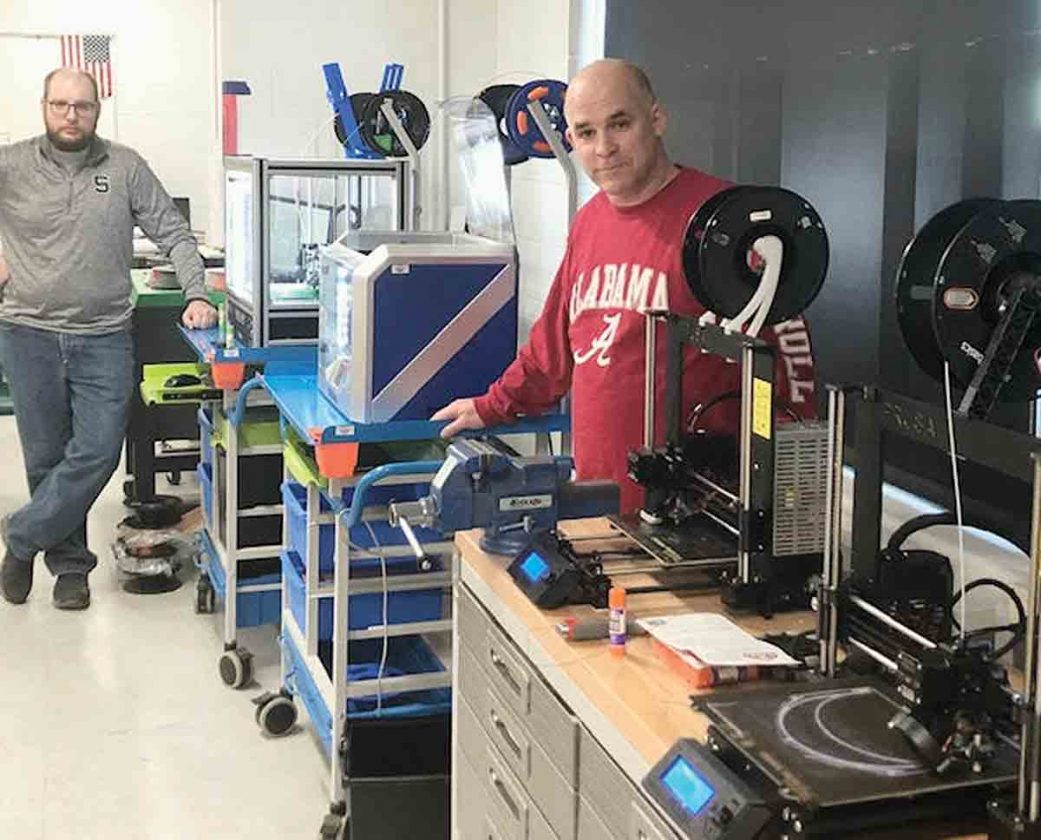 In time of need, the best of humanity tends to step forward.

As the county, region, state, nation and the entire world face the stark reality of the coronavirus (COVID-19) pandemic, one of the glaring needs of those in the medical field who come face-to-face with exposure daily is evident — the lack of PPE (personal protective equipment).

Enter the always-churning minds of two of the area’s STEM teachers — Jarvis Huck at Noble Local/Shenandoah and Mike Legats of East Guernsey/Buckeye Trail – to quickly formulate a game plan and put it into motion to help “slow the spread.”

“Mike messaged me on Twitter and we discussed Gov. (Mike) DeWine’s call-out to people who can help,” said Huck, referring to the first contact between the two educators. “We decided to meet at the school (Shenandoah HS) to figure out what our capabilities were and what we could possibly make.”

The two chose to produce PPE face shields using the school’s 3D printer, and they selected a design process found on the National Institute of Health website which was later posted on social media to invite others from the area to join the project. They also compiled a list of the needed materials (filament, elastic, gromets, washers and transparency film).

Face shields, according to Legats, are very much in demand and can also be produced more quickly than a normal facemask.

“Facemasks take a long time to produce,” he said, “and we wanted to go with something where we could maximize production and that would be simple to put together… something that wouldn’t require a lot of material and time so we could make as many as possible.”

Another advantage of the face shields is that they are reusable since the plastic shield can be removed and either sterilized or replaced and easily put back onto the head piece.

Joining Huck and Legats in producing the shields in the Shenandoah “Fab Lab” has been Shenandoah Elementary/Middle School Principal Chad Miller, who has been on the “graveyard” shift of production.

“Chad takes the night shift and that allows us to pretty much run 24 hours a day to make as many as we can,” said Legats, who indicated the number currently being produced is between 25-30 per day.

Huck pointed out that the on site “crew” is limited to those three for obvious reasons.

“We don’t want to have too many people here at once,” he said. “We have to make sure we’re following ‘social distancing’ as much as possible.”

The local need is nowhere near its anticipated peak, but it’s still there.

“My neighbor is a physician and he said they only had one N-95 mask,” said Legats, “so we got one to him right away. We will get him more as quickly as we can, but he said one would do for now because they’re only doing emergency procedures.”

Legats also said Miller had delivered four shields to Southeast Ohio Regional Medical Center in Cambridge for use in its Heart and Vascular Department and that by Friday, more than 80 completed shields had gone out the door with United Ambulance and the Belle Valley VFD among those that received a supply.

“Finding the materials has been tough,” said Huck. “When you order online, things are so delayed because the companies are either only shipping essentials or their work force has been reduced.”

“We currently have materials to keep up with our in-house production,” said Legats, “but the need will increase once the surrounding schools begin shipping their completed headgear for final assembly.”

“It generally takes between two and two-and-a-half hours to make one (headgear),” said Huck. “We are making five at a time right now on the four printers we have here, with one capable of making two at a time.”

“Jarvis contacted me and said they were short on printers and asked if we would come on board,” said Lestock. “I had one (printer) at home and I moved the other two from the high school to be able to print three at a time.”

Having them at home allows Lestock — who has turned his garage into a “laboratory” – to produce headgear around the clock and conform to the “stay at home” directive simultaneously.

“I’ll just set the alarm for 2 a.m. and do what’s needed to keep them going,” he noted, with his expectation to make four head pieces per day on each of the three printers.

The game plan is for Lestock and the other schools to send their headbands to Shenandoah for final production, with Stan Randolph volunteering his services as Caldwell’s courier.

Helping out was a “no-brainer,” according to Lestock.

“I just wanted to be involved and help out any way I could,” he said. “I want to be a good example for our kids and this was a good chance to jump in and help out.”

Another source of production is Mike Schott, the former industrial arts teacher at Caldwell who is using his personal 3D printer to aid in production, with several being sent to his son, Jason, who is a doctor at William Beaumont Hospital in Royal Oak (Michigan), a suburb of Detroit.

“Our immediate goal is to help those within the county and surrounding areas,” he continued, “but we’ve been contacted by others and we’ll do our best to supply them, too.”

The project has had a far-reaching effect, according to Legats.

“We were even contacted by a teacher in Hawaii who saw the social media post and wanted us to send her the files on how to produce them,” he said.

Legats — who estimates that with the influx of more head pieces from other schools that as many as 300 PPE face shields will be completed weekly — noted that Marietta College loaned two of its 3D printers to Noble Local and donated 10 rolls of filament. He also pointed to several local businesses and individuals have also become involved, including Caldwell Lumber, Orme Hardware, Cambridge Packaging and Caribeth Legats.

“Anyone who has a 3D printer or any of the materials, we’d appreciate them getting it to us,” said Legats, with the specific needs including 3/4-inch or 1-inch elastic, 5/32nd washers. 5/32nd and 3/16th gromets and filament paper.

The latest collaboration is being done with one purpose.

“The goal is just to help people… that’s what it’s all about,” said Huck. “I saw where Tennessee State has students staying in their fabrication lab 24/7 to help out, and if a Division I university is doing this too, we feel we’re doing the right thing.”

Certainly agreeing with that sentiment is Noble County Emergency Management Agency Director Chasity Schmelzenbach, who is serving as the “distributor” for the shields.

“Jarvis contacted me and told me there would be several schools working together on this,” said Schmelzenbach, “so we discussed potential production numbers because that (face shields) is one of the items we’re very short on locally.

“They gave me the geographic area they wanted to service primarily,” she continued, “so I started pulling numbers for the first responders, health care facilities and hospitals who would want to utilize them.

“I will also contact the other area EMA offices to see what their needs are,” she added.

Schmelzenbach said being prepared for a possible increase in COVID-19 cases locally is of the utmost importance.

“We haven’t had the massive surge that we anticipate we’re going to have,” she said. “It’s spread a little slower in our part of the state so far, but doing things like this will help prepare us for what’s coming. We don’t want to find ourselves in the position others have seen where we can’t get what we need in time.”

“It’s truly amazing how they’ve stepped up,” she said. “We will be happy to help purchase the materials and handle the distribution… we’re just grateful to them for handling the production.”

Also appreciative of the efforts of the local educators is Noble Local Superintendent Dan Leffingwell.

“I’m so proud of the many educators throughout the region that are stepping up and finding solutions for not only local, but global problems,” he said. “I’m so appreciative of our NLSD staff and their willingness to do whatever it takes to work creatively and collaboratively to help those on the ‘front line!'”

It’s become a catchphrase for Noble Local, but in this case the entire region has stepped up to #makeIThappen.