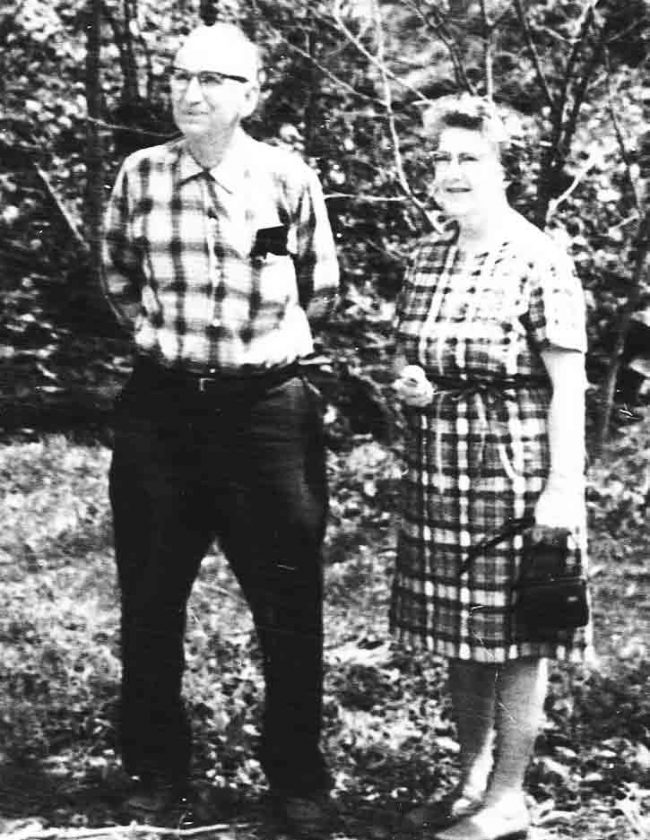 Dr. Harry L. Duncan and his wife, Helen, enjoying the outdoors on an afternoon near Jackson Run. The couple was devoted to the Matamoras area.

Continuing this week with the healthcare given to Matamoras by Dr. Harry L. Duncan we pick up with his faithfulness in home visits. These included trips which sometimes witnessed his wife, Helen, and daughter, Jo, accompanying him. The two would stay in the vehicle enjoying the outing as the visit was made. Not so pleasing were the times that the car would get stuck on roads or paths that were used to get to their destination. Eventually the passengers included the new son-in-law, Jim Corbett. He earned his presence in the car by providing a little more horsepower to move the vehicle whenever it became stuck.

Jim could also be used as a guinea pig. He once sprained his ankle and Dr. Duncan decided it needed a shot of cortisone. Jim said that he never had a shot in the ankle. Dr. Duncan replied he had never given one in the ankle… so they were even.

One series of home visits was recounted to me concerning a patient in town who called for Dr. Duncan to come see him due to extreme pain he was having in his side. The diagnosis was a ruptured appendix and a hospital visit was necessary.

The man refused. Dr. Duncan agreed to visit him daily for an extended time adminstering penicillin shots. The patient recovered.

Nights were not off limits as calls would come at any hour for a needed visit. Or a siren in the back street of their home would signal that Jim Corum, the town’s mortician and ambulance provider, had arrived with someone needing the doctor’s quick attention. Or a knock on the door saw a patient on the porch unable to wait until the morning office hours. These events usually meant a quick aside into the garage where his car contained the “little black bag”… all in the line of duty.

With regard to the doctor’s famous pipe, it was first used in medical school to overcome the unpleasant fumes of formaldehyde. Those assisting over the years included Opel Miller, Elinore Miracle, Catherine Morris, Leona Tuel, and my mother, Carol Miller.

Doctor Duncan retired in 1976 following 32 years of service to Matamoras. Helen passed away the following year with Dr. Duncan following her in 1992. They are buried in Oak Grove Cemetery in Marietta.

John Miller is president of the Matamoras Area Historical Society. Membership dues are $15 per year single/couple. Life membership is $150. Contact the society at P.O. Box 1846, New Matamoras, Oh. 45767. Much of this column is built on the work of Matamoras’ historian, the late Diana McMahan.