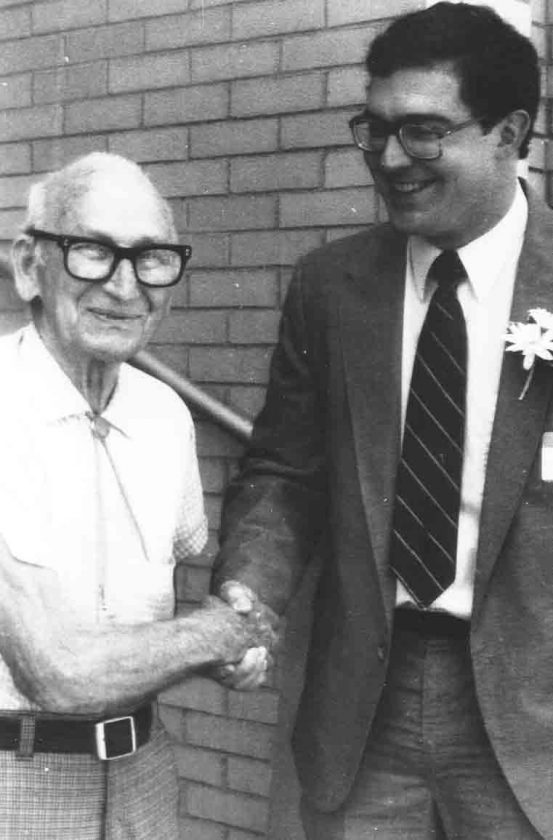 Dr. Timothy Clare receives the mantle of Matamoras’ physician as Dr. Duncan shakes his hand. The picture was taken in 1983 at the opening of Dr. Clare’s office on Main Street. (Photo provided by Dr. Clare)

With Dr. H.L. Duncan’s retirement in 1976 Matamoras had no medical professional to serve the town. Several doctors practiced for limited amounts of time until 1985 when Dr. Timothy Clare arrived for what would become a storied career of care for the Matamoras area.

Dr. Clare received his medical degree from Thomas Jefferson University Medical College in Philadelphia in 1982. He completed a three year residency in family practice at St. Margaret Memorial Hospital in Pittsburgh. His wife, Karen, served as assistant head nurse at the University of Pennsylvania Hospital.

His first office in town was located in the former building of the Peoples Savings Bank on the corner of Main and Front Streets. Those patients who were older were surprised to see the solid wood examining table of Dr. Harry Dickson situated among some of the furniture in the new office. That table is now on disply in the society’s museum.

A newspaper article covering the grand opening of the office stated, “Duncan retired after a 32 year career in the area. Residents hope that Dr. Clare and his family will like New Matamoras enough to stay as long.” Well they did! Dr. Clare’s tenure rivaled that of any other doctor. He stayed for 34 years.

During the 1990s, as fate would have it, the Main Street building caught fire and was burned beyond use. In response Jo Duncan Corbett, Dr. Duncan’s daughter, offered her father’s former office building on Second Street for Dr. Clare’s practice. He accepted and once again the old office was revived as the town’s medical center.

Dr. Clare retired in December 2018 to the sincere thanks of the citizens for devotion in our area of the county. In response Matamoras’ village council passed a resolution to honor his medical contribution by naming Dec. 29 as Dr. Timothy Clare Day in perpetuity.

A note of review: the building on Second Street served as office to many doctors, including but not limited to, Drs. Riley, Mills, and Duncan. It is still used today by Dr. Clare’s replacement, Kendal Neill, nurse practitioner.

Kendal, who grew up in Marietta, has ten years of experience in medicine and a master’s in nursing. She immediately took over the practice and is hoping to expand the office hours as her patient load is growing.

John Miller is president of the Matamoras Area Historical Society. Membership dues are $15 per year single/couple. Life membership is $150. Contact the society at P.O. Box 1846, New Matamoras, Ohio 45767. Much of this column is built on the work of Matamoras’ historian, the late Diana McMahan.