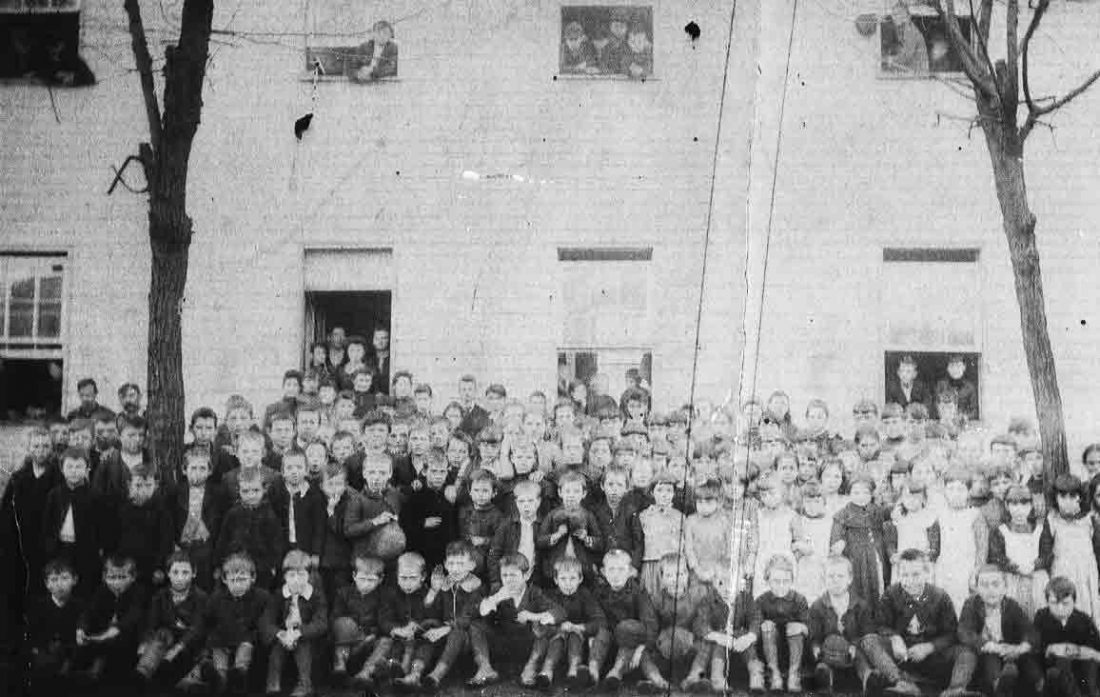 The student enrollment at the Third Street school in Matamoras can be appreciated by the large number of pupils shown in this picture taken circa 1877. Notice the students watching from every window. (Photo provided by the Matamoras Historical Society)

From the last several weeks of covering the doctors of Matamoras it is intersting to note how many began their life’s work as educators who then decided to go into the field of medicine. It is appropriate then that we now turn to the various public schools that were in operation throughout the history of the town. This topic will also require more articles than today’s column.

With the early settlements on the site of the town there was no public school. The educational needs of children were fulfilled by the family. Within a short time as the area attracted more citizens, a log community building was built at the mouth of Mill Creek. It was used as a school during the week and on Sundays the structure was used as the community’s church. As needed it was also the site for public meetings.

At some point a schoolhouse was built in Grandview and the children of the area walked to either the Mill Creek school or the Grandview structure, whichever was closer. Folloing the first platting of the town in 1846 a second-hand building was made fit for a school circa 1857. Ten years later the old schoolhouse on upper Third Street was built. It was a two-room school with its administrator being Abram Loman who was assisted by Charles Young and Miss Matilda Rinard, who later became the wife of Mr. Young.

As pupil numbers quickly rose the school was expanded in 1870 to encompass four rooms. The building then measured 85×30 feet. In 1881 there were 222 students with Professor Wylie Barber as administrator and in 1890 enrollment reached 300. Two well-known doctors taught in this school, Drs. John Martin and C.T. Riley. A third, Dr. Statts, also was on the faculty.

By the late 1880s it was apparent that the town needed a larger, more modern school. At the time of this new school’s construction in 1890-1891 the members of the board of education were Dr. W.L. West, Dr. C.T. Riley, and Jacob Grohs. Grohs died before the completion of his term and was replaced by Charles A. Cline.

This new school is remembered today by many people and for obvious reasons it is referred to as the “old school.” For those who do not remember it, the building stood at the present site of the Peoples Savings Bank. It was constructed by P.Q. Shrake, a local contractor who also owned a brick factory in Matamoras. The cost was $3,000 for the grounds and $7,000 for construction. In those times such a price tag was a gigantic sum of money. The public was duly impressed at the importance with which Matamoras regarded education.

John Miller is president of the Matamoras Area Historical Society. Membership dues are $15 per year single/couple. Life membership is $150. Contact the society at P.O. Box 1846, New Matamoras, Ohio 45767. Much of this column is built on the work of Matamoras’ historian, the late Diana McMahan.