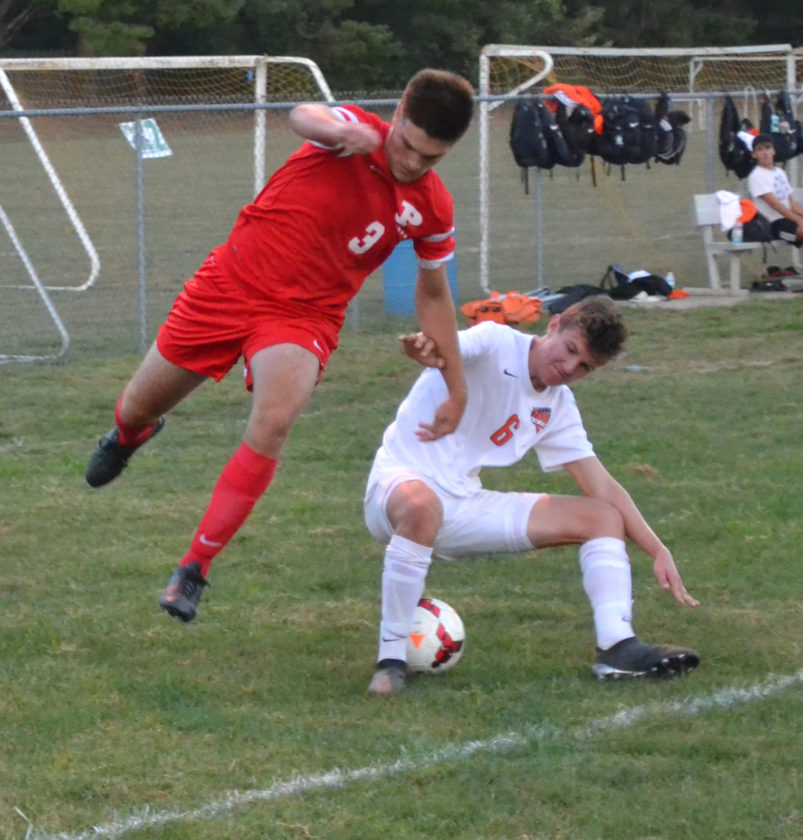 DEVOLA — Even without its head coach, Parkersburg High prevailed.

The Big Reds made two first-half goals stand up in a 2-0 triumph over Marietta High in a boys’ soccer match Saturday night at Jerry Brock Field.

Don Fosselman, the longtime PHS soccer boss, was absent due to receiving a red card ejection in Parkersburg’s 4-3 setback to George Washington on Thursday. As a result, the coach had to miss his team’s next match (at Marietta).

“We played our hearts out against GW,” said Parkersburg junior striker Parker Miller. “We lost with like four minutes left, so it was great to come back and get a win (against MHS).”

Parkersburg, which was playing Marietta for the first time on the pitch in 13 years, improved its record to 9-3-2 overall. Opoku-Duah and Miller each had a goal for the winners.

“We scrimmaged Marietta last year, but we never really played them,” Miller said. “It’s good to play them again, because we know all the kids anyway.”

Marietta, which still leads the all-time series against PHS with an 8-7-6 advantage, fell to 5-4-2 on the season. The Tigers were a little flat in the opening half, but battled hard after the break.

PHS went on the attack and had MHS on its heels for most of the first half. In the eighth minute of play, Matt Runyon had a throw-in from the right sideline, and Opoku-Duah put the finishing touch on it past Tiger keeper Ian Coleman to make it 1-0.

“Coach (Donnie Fosselman) told us before the game to get on the back post when Matt (Runyon) throws it in,” Opoku-Duah said. “He’s got that long throw, and I just followed the directions to a T, and I got on the back post and it was just there.

“Someone was marking me but I lost him. I just juked him a little bit, and I found some open space behind the goalkeeper.”

The Big Reds stretched their lead to 2-0 a few minutes later when Miller beat Coleman on a rebound shot.

“It was a deflection,” Miller said. “I think Teddy Hutson shot it, and it bounced off the keeper. I just played it in.”

After the break, the action was more end-to-end with both schools getting scoring opportunities. Opoku-Duah got a good lock and nearly notched his second goal of the match but was thwarted by Coleman.

“That was close, but the goalkeeper made a nice effort,” Opoku-Duah said.

With about 18 minutes left in the contest, Marietta’s Ben Dehmlow served a nice pass to Austyn Chen, who had a one-on-one breakway to the goal. But Chen was stymied on a nice save by PHS keeper Jacob McKnight, who finished with 10 saves during his clean sheet.

Marietta is scheduled to play at 7 p.m. Tuesday at Rosecrans. PHS plays host to Riverside at 7:30 p.m. Tuesday.