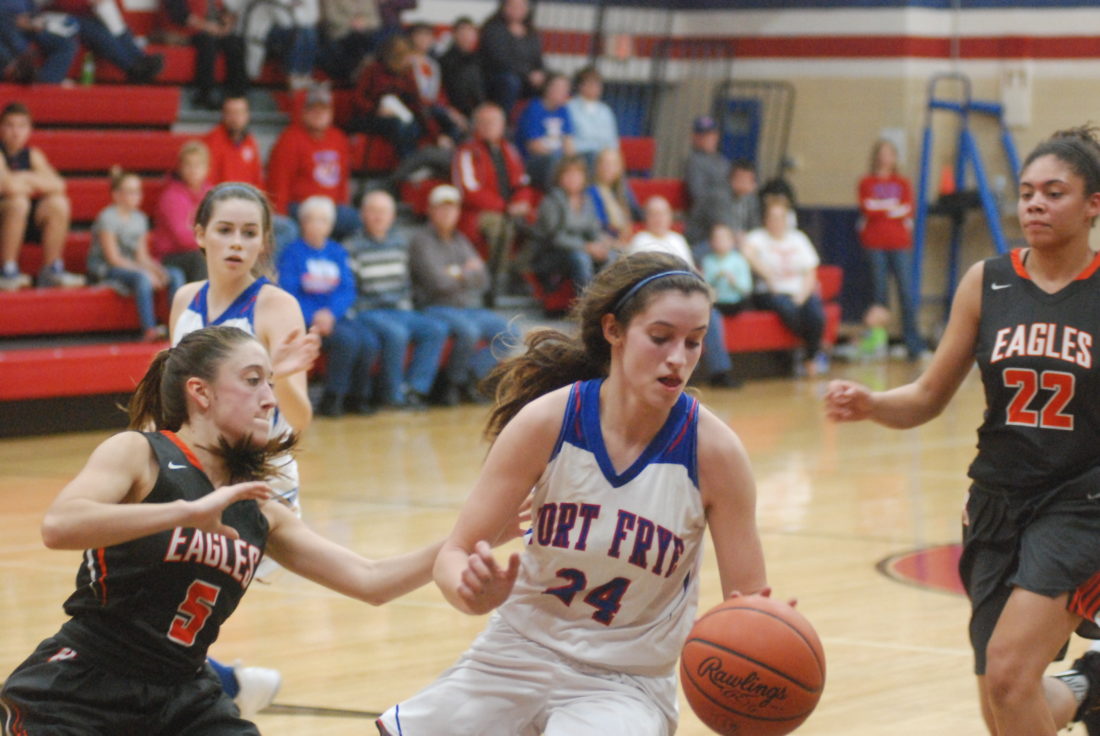 BEVERLY — The ability to play great team defense has long been a staple for a Fort Frye girls basketball program that continues to be one of the most successful in the area.

In Monday evenings season opener against Belpre, a very young Cadet team showed they have every intention of carrying on the defensive tradition as they forced 27 turnovers and limited the visiting Lady Golden Eagles to just 27 points in a 38-27 win.

Fort Frye could never seem to get their offense clicking for a lengthy amount of time but their effort on the defensive end proved to be too much for an very young Belpre squad.

“We are very young and Belpre is too and I think both teams played like we were young,” said Fort Frye veteran head coach Dan Liedtke. “I thought our defense really did a nice job of holding them down. It was a real gut check game and I was glad to see our girls step up right when they had to step up.”

The Cadets out-pointed Belpre 11-7 in the opening period but quickly saw the Lady Eagles cut the lead to a single point early in the second period on a three-pointer by junior Sydney Spencer.

Fort Frye quickly answered on back-to-back buckets by junior Morgan Borich to extend their lead to five at 15-10 .

Belpre responded with an inside score by sophomore Kyna Waderker and a steal and bucket by Abby LaFatch to trim the lead to one before Kiersten Kesselring’s put-back basket just before the end of the half gave the Cadets a 17-14 lead at the break.

Fort Frye came out strong in the second half and quickly extended their lead to a game-high seven on a pair of freebies by freshman Olivia Schneider and another Borich basket but the young Golden Eagles came charging right back, using a 8-4 run to trim the lead back to three at 25-22 with less than four minutes to play in the third.

Belpre freshman Curstin Giffin scored consecutive field goals for Belpre and after a pair of Kesselring freebies briefly pushed Fort Frye’s lead back to five, Waderker answered for the orange and black to cut the lead back to three heading to the final eight minutes.

After struggling offensively for the better part of the first three quarters the Fort began to get untracked in the final period as they strung together an 8-0 run sparked by three-pointers by Borich and Schneider to open their first double-digit lead of the game at 35-24 with three minutes to go in the game.

“The ball wasn’t falling for us and we were just out of sync all night on offense,” said Liedtke, whose team held Belpre scoreless for the first six and a half minutes of the final quarter. “We were still able to maintain and finally we started making some shots and pulled away a little bit.”

A three-ball by Belpre’s Hannah Deems briefly cut the lead back to eight but Schneider’s second triple of the final quarter proved to be the final dagger into the hearts of the Eagles.

Belpre head coach Chris Murray felt his young team gave a nice showing in a very tough enviroment to kick off their season.

“I thought we played a good competitive game right up until the end, said Murray, in his fourth season as Belpre head coach. “I thought Fort Frye defensively was excellent tonight and we weren’t too bad either. I thought our girls fought hard but unfortunately we came up a little bit short.”

Borich lead all scorers with 14 points while Schneider reached double digits with 10 in her first varsity game.

“I really feel like those three are mentally ready for this level,” said Liedtke of his three rookies. “I think they know the game enough and we are going to have to rely on them for a lot this year.”

Waderker led Belpre with 10 points and eight boards and Murray feels she will only continue to improve as the season progresses.

“Kyna (Waderker) had a great game and we felt like we had an advantage inside with here,” said Murray. “Fort Frye was doubling the post as much as they could. Kyna works really hard inside to get position and it was good to see it pay off for her.”