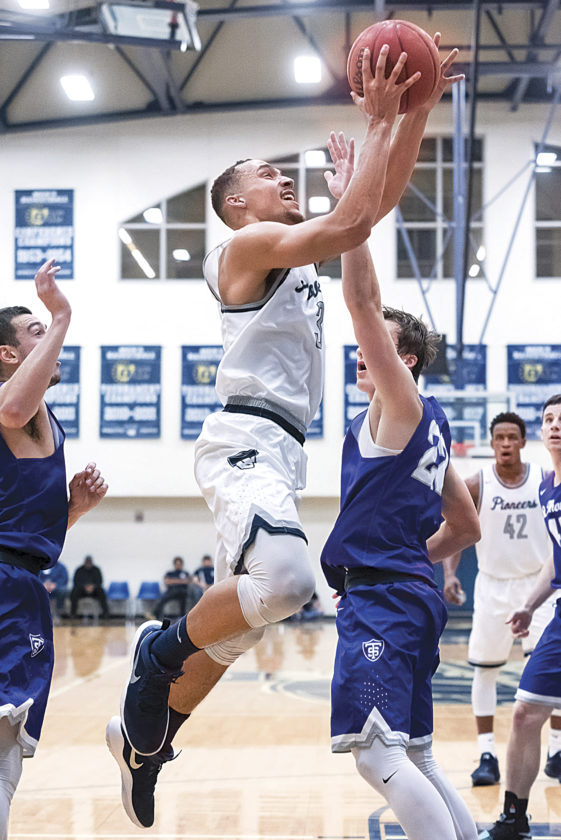 DeVaughn Wingard was clutch in the waning seconds of overtime.

The 6-foot-3 Marietta College cager made a putback of his own miss and then a bonus freebie with 9.9 ticks on the clock to help the Pioneer men escape with a thrilling 85-83 triumph over the University of St. Thomas in the Great Lakes Invitational finale at Ban Johnson Arena Saturday night.

“DeVaughn made a huge bucket,” said 11th-year MC head basketball coach Jon VanderWal. “He sat there for a long time (on the bench) but he was ready to go in and make plays when we needed him to, and he made it.”

Marietta, No. 13 in the nation in the D3hoops.com Preseason Top 25 poll, improved its record to 2-0. Anthony Wallace paced the Pioneers with 22 points. Kyle Dixon added 16, while Avery Williams and Caleb Hoyng had 12 and 10, respectively.

“Then, he went to Notre Dame College, and he’s actually been out of basketball for a couple of years.

“We’ve been in communication with him for over a year now to try to make it work to get him here to Marietta. He’s really excited about it. He’s missed some of the preseason with some injuries. I know that he’d liked to have played more tonight. But he’s still learning our system. He’s going to be a really nice player for us.”

St. Thomas fell to 1-1. The Tommies were led by senior Ryan Boll, who posted a double-double with a game-high 39 points and 11 rebounds.

GT Johnson chipped in with 14 markers, and was the only other UST player to score in double figures.

The contest featured eight lead changes and two ties in the first half. Sparked by Wingard’s two triples during a 9-0 run early on, the Pioneers led 22-16.

But the Tommies stayed close, thanks to Boll’s 15 first-half points.

With about five minutes before the break, Dixon drained a three and followed that up with a jumper to give MC a 38-29 lead.

At the intermission, the Pioneers led 44-34.

At the 12:44 mark, Johnson’s bucket and bonus freebie put the Tommies in the lead, 54-53, since early in the opening half.

Marietta came right back, though, and regained the advantage on Mel Shuler’s triple.

Down the stretch in regulation, MC had the lead but UST stayed close and eventually tied the score,76-76, on Boll’s basket.

“We really struggled,” VanderWal said. “We stopped moving the ball. “We have so many weapons that sometimes guys try to do too much on their own.”

Late in overtime, St. Thomas had a three-point advantage, but Marietta cut it to one, 83-82, on Wallace’s two foul shots.

With time winding down, Wingard got the ball in the paint and went up for a shot — but missed. Getting his own rebound, he laid in the basket and was fouled in the process.

The Tommies came back, and had an opportunity to tie the game, but Boll’s jumper was a little off the mark.