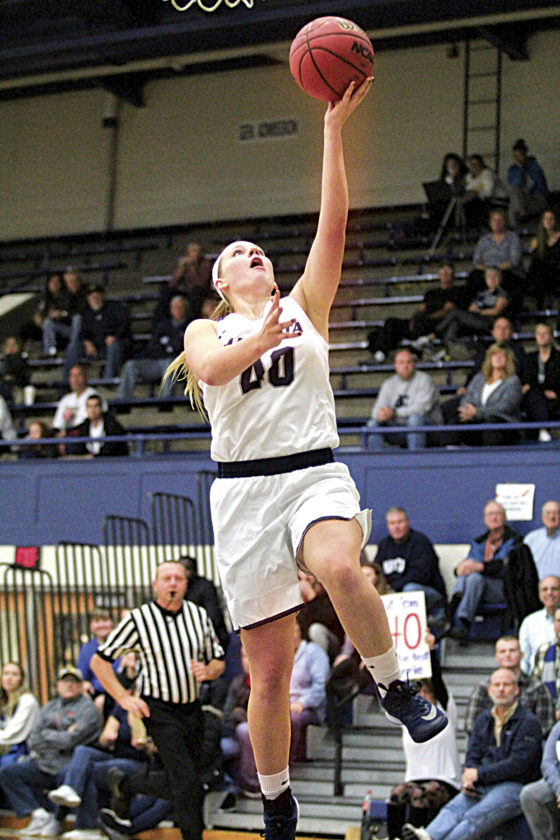 Photo by France Moise Marietta College’s Corrie Burkhardt goes up for a layup earlier in the season opener. Burkhardt and the rest of the Pioneers host the 33rd Jim Meagle Turkey Shootout inside Ban Johnson Arena this weekend.

While the Marietta College women’s basketball season is just two games old, Alexis Enochs has yet to start.

But the 6-foot-1 sophomore — this season’s first Ohio Athletic Conference Women’s Basketball Player of the Week — has been instant offense off the pine, averaging a team-high 14.5 points and eight rebounds a game.

“I’m just determined to give it my all,” said Enochs, a former Fort Frye Cadet, after posting a double-double with a career-high 17 points on 7-of-7 shooting from the floor and 10 rebounds in MC’s 70-67 come-from-behind triumph over visiting Transylvania University this past Sunday.

After Marietta starter Jenna Andersen got into foul trouble, Enochs ended up playing 26 minutes, and was a force in the paint with some huge putbacks.

“One of my goals is to give energy and our whole team is energy, but I just want to pump the team up and get them going,” Enochs said. “So, I know that’s one way to do it.”

Kole Vivian is hoping that Enochs and the rest of the MC Pioneer squad (2-0) will continue to be energized in this weekend’s 33rd annual Jim Meagle Turkey Shoot at Ban Johnson Arena. The defending tourney champion Pioneers are scheduled to tip off play against the Denison University Big Red (3-1) at 6 p.m. Saturday, while the Wittenberg University (2-1) Tigers will face the Carnegie Mellon (Pa.) Tartans (3-0) in the 8 p.m. nightcap.

At 3 p.m. Sunday, Marietta will face WU with DU squaring off against CM at 1 p.m.

“This weekend, Saturday and Sunday, we’ve got Denison first and then we got Wittenberg,” Vivian said. “They’re going to be really good teams. They’re well-coached and have a lot of talent. We’re going to have our hands full. It doesn’t get any easier.

“We’re hoping to be able to defend the championship but we have our work cut out for ourselves.”

Enochs is looking forward to the weekend challenge at the BanJo.

“I’m really excited,” Enochs said. “We have a great opportunity against good competition.”

Enochs, who actually started seven of the 27 games as a frosh last season, will probably be one of the first Pioneer players off the bench.

“I don’t mind it,” Enochs said. “I like it. I don’t have any preference. I can play with everybody. Everybody’s really skilled and works so hard together. It doesn’t bother me one bit (coming off the bench).”

Vivian played 11 cagers in the win against Transylvania, and got 29 points from the subs.

“That was a good team we beat there,” the MC coach said.