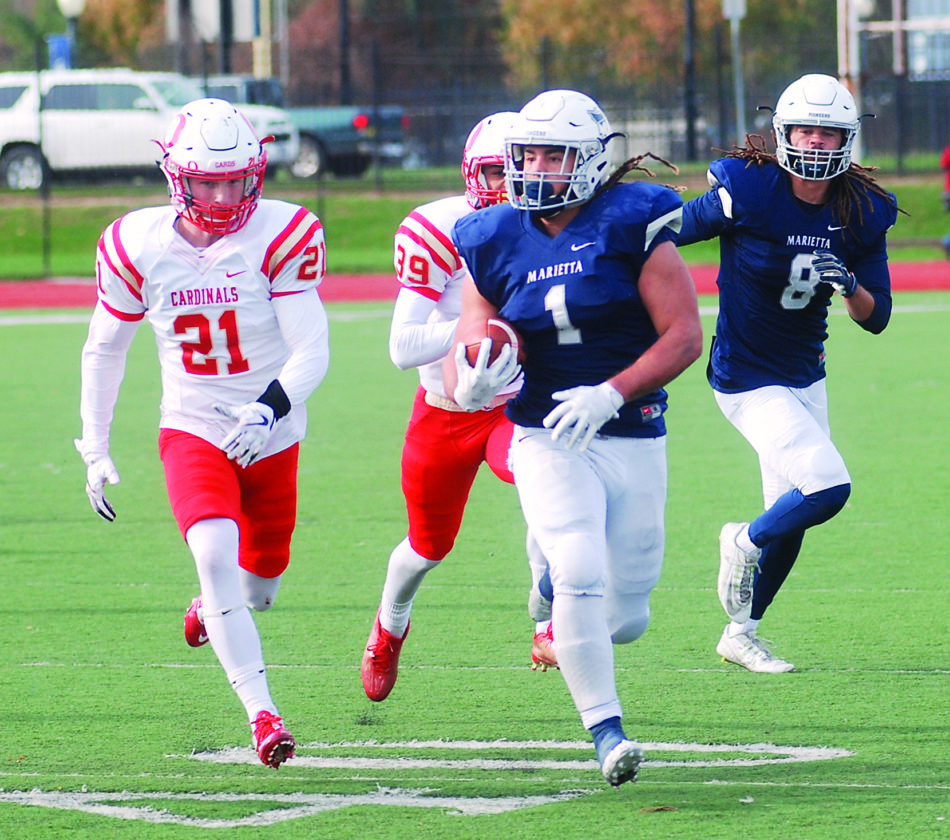 Roger Walker had his usual great game at running back.

But Marietta College on the whole suffered an off Senior/Vets Appreciation Saturday as it dropped a 48-14 decision to Otterbein University in an Ohio Athletic Conference season finale at Don Drumm Stadium.

“It’s definitely sad, because this year we did some great things,” Walker said. “It just wasn’t our day today.”

Walker, though, achieved a couple of milestones when he rushed for 214 yards on 30 carries and one touchdown and also caught five passes for 75 yards and one TD. With those stats, the 5-foot-11, 215-pound RB eclipsed both the career 4,000-yards rushing mark and 5,000 career all-purpose yards.

With Walker’s two six-pointers, he finished with 50 and was two shy of equaling Dante Brown’s standard of 54.

“I love all of my teammates, and I wouldn’t trade them for anybody in the world,” Walker said. “The offensive linemen did great things for me this year, last year, and the year before.”

Otterbein (6-4 overall, 5-4 overall), however, dominated the game from the start with quarterback Logan Stepp beating MC (6-4-, 5-4) with both his right arm and legs. The senior standout finished with 203 passing yards and three touchdowns. On the ground, he gained 135 yards on 13 attempts and scored two TDs — and with those stats, he became the first football player in OAC history to pass for 2,000 yards and rush for 1,000 in the same regular season.

Stepp had touchdown throws of two yards to Julian Lowe, and three and seven yards to Hunter Joseph. The signal caller also had TD runs of three and 20 yards.

Joseph was Stepp’s leading receiver with eight receptions for 105 yards.

Cardinal RB Dakota Smith added 98 yards on 17 totes of the pigskin and one TD, and DB Brandon Paschal had a 42-yard pick-6.

Tim Doup-coached Otterbein, which has now defeated MC five straight years, never trailed in the contest, leading 14-0 at the end of one and 34-0 at halftime.

“We started slow, behind the chains, and we can’t do that when we’re facing a good opponent,” Walker said. “We’ve just got to keep moving forward, and try to get some momentum somewhere. But we couldn’t find it until the second half, and by then, it was too late.”

After the Cards stretched their lead to 41-0 on a Stepp to Joseph TD pass in the third quarter, Marietta finally got on the scoreboard when junior QB Darrien Fields hit Walker with a 14-yard scoring strike at the 5:31 mark.

Fields completed 14-of-23 throws for 90 yards. He was also intercepted twice.

With the TD pass, Fields set a school single-season record of 21, breaking the old mark of 20, which he had equaled the week before.

With 1:19 left to play in the fourth quarter, Walker rushed five yards to paydirt to cap all the scoring in the game.

On a positive note, Marietta finished with its first winning gridiron campaign since 2006.

“It’s really awesome to get a winning season, but we wanted to be actually better,” Walker said. “At the same time, it’s a step forward. It’s progress, because we won three more games than last year.”