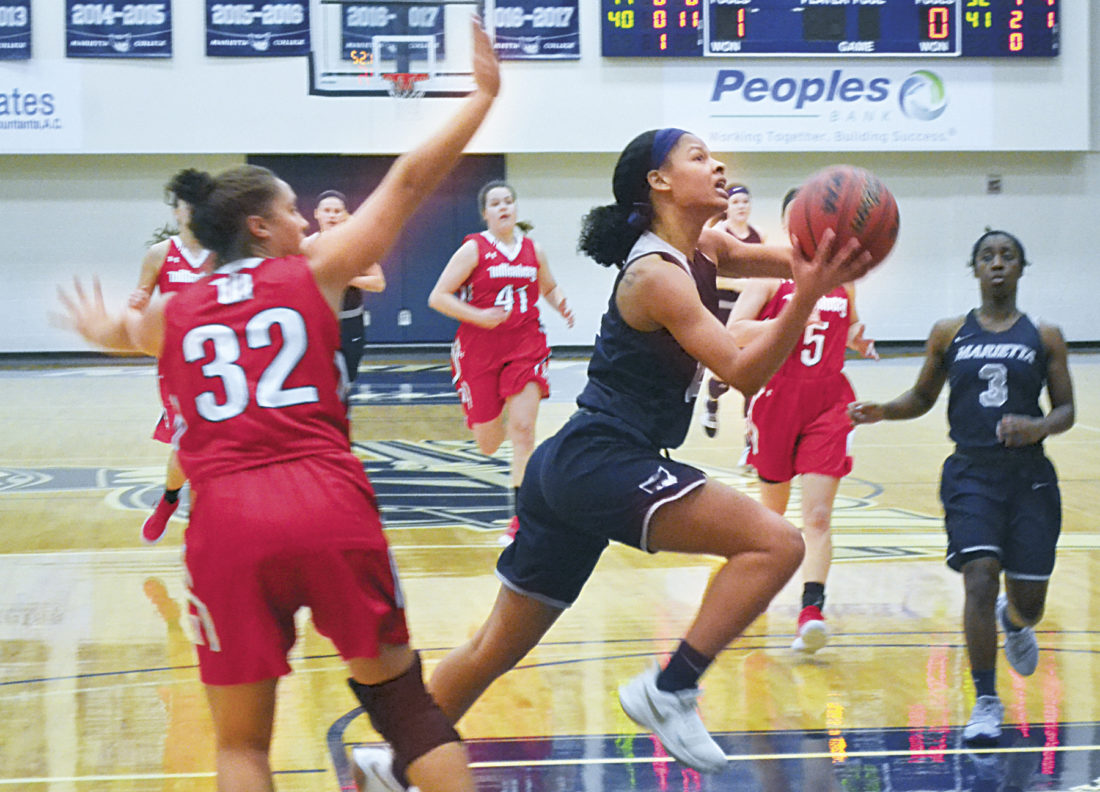 “I thought that we had a good team win, and I just knew that I had to be aggressive coming into the tournament,” said the younger Borich, who scored 17 points in each of the two games played in the tourney. (MC beat Denison, 92-87, Saturday night.)

“I think that I owe my teammates a lot of credit for helping me out and helping me get that (award), because without them, I wouldn’t have got it,” added Borich.

After Borich’s 17 markers, Corrie Burkhardt and Jenna Andersen added 15 and 11, respectively. And, Amisha Herd and Laura Pullins each netted nine.

The 5-foot-9 Burkhardt, last year’s Lisa Wagner MVP, was named to the all-tournament team. She also had team-highs in rebounds (11) and assists (5).

All in all, 16 Pioneer cagers saw playing time.

“We’ve got a lot of people who can do a lot of things,” Borich said, “and we’re able to rotate in people without losing anything. Everybody’s always hyped up and ready to come in. So, we just need to keep that going.”

MC head coach Kole Vivian agreed and added, “We’re scoring a lot right now. We need to be a little better on the defensive end.”

Wittenberg fell to 2-3 on the season. The Tigers were led by non-starting freshman Kristie Kalis, who tallied a game-high 24 points. She also was an All-Tournament honoree.

Sydney Mayle had a double-double for WU with 18 points and 13 boards, while Hannah Weaver chipped in with 10 markers, and Delaney Williams, eight assists.

Borich and Burkhardt each had six points to help stake Marietta to a 20-12 first-quarter advantage. At the 3:05 mark, Borich’s jumper gave the Pioneers a 20-5 lead.

Wittenberg came back in the second quarter, thanks to eight points from Kalis, and actually tied the score at 33-all on Korynne Berner’s jumpshot at the 2:50 mark.

But MC regained the lead 35 seconds later on Jo Herd-Middlebrooks’ layup and then gave itself a five-point cushion on Pullins’ triple.

At halftime, the Pioneers owned a 41-38 advantage.

Marietta maintained the lead in the third quarter, but was unable to distance itself until Lett drained a long three at the buzzer, making it 65-56.

Marietta is scheduled to tip off Ohio Athletic Conference play against Otterbein University (3-2) at 7:30 p.m. Wednesday at the BanJo.

“I’m happy to be 4-0, but now Otterbein comes in here, and they’re a really good team,” Vivian said. “They can fill it up, so if we don’t get those issues fixed on defense, they’re going to be able to score a lot of points.”