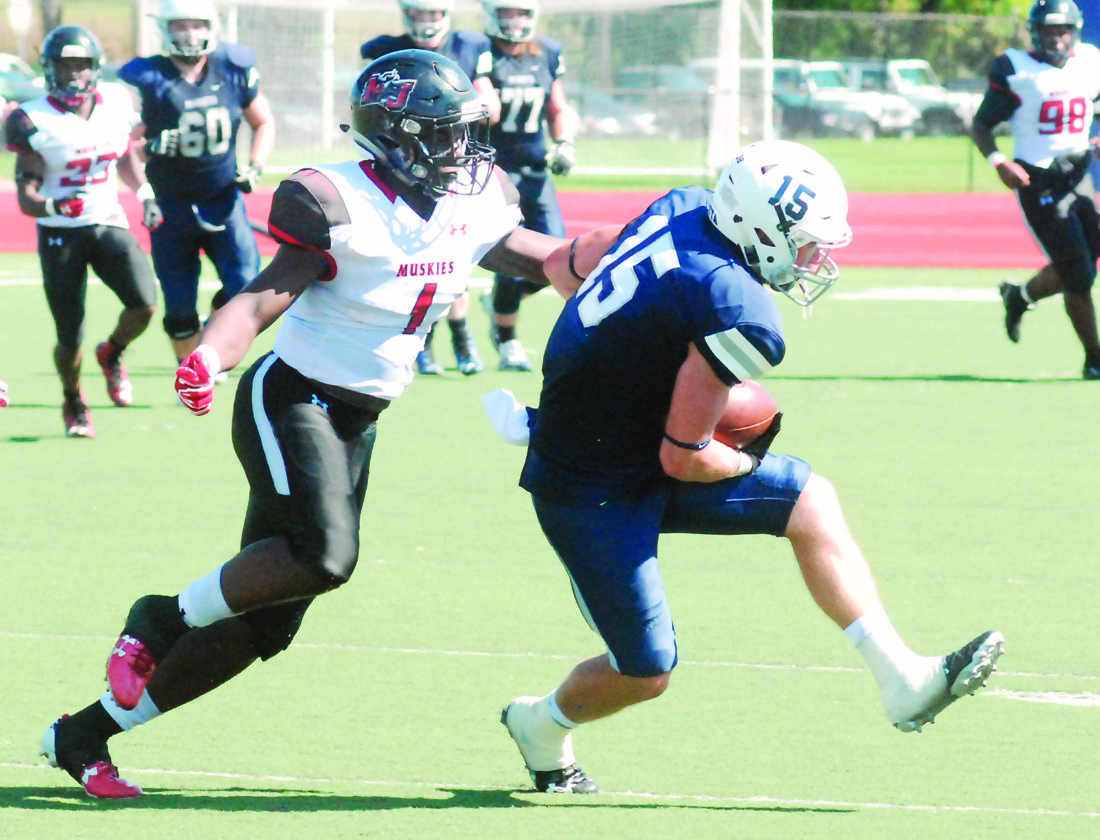 Marietta College won seven football games under the guidance of the late Gene Epley during the fall of 1996.

Last year, MC dropped a 49-21 decision to the Cardinals in Westerville.

Fast-forward to today, lot of positive things have occurred for the Pioneers, who win or lose Saturday, will post the football program’s first winning season since 2006.

“Confidence is an amazing thing,” Waddle said. “The guys are playing hard and playing with confidence. The guys have certainly worked hard and deserve to be where they’re at.

“I think that we’ve won a few games that maybe some people outside of our program didn’t expect us to win.”

Currently, MC owns a four-game winning streak. Last Saturday, it never trailed in a 49-21 triumph over Capital University (1-8, 1-7) at Bernlohr Stadium in Columbus.

Earning his third straight OAC Offensive Player of the Week, Walker rushed for 224 yards on 29 carries and three touchdown runs of 5, 4, and 70 yards, while Fields completed 17-of-26 passes for 169 yards and two TDs of 13 yards to Alex Smith and of 6 yards to Robert Nelson. The Pioneer signal caller also gained 73 yards on seven attempts, and scored one six-pointer.

“It’s easier to block for a guy like Roger or a guy like Darrien,” said MC All-OAC offensive left tackle Caleb Riggleman. “They make things happen that shouldn’t happen sometimes. They’ll break a tackle where no one else should break a tackle.”

“I mean, we do our jobs upfront,” he said. “Usually getting our guys, and they (Walker and Fields) go and do the rest of it. They just need a little something, and then let them go to work.

“Really, it’s everybody at all the skills positions, because we’ve got a good core. But those two just happen to be the ones that stand out the most at this time.”

Fields needs just one touchdown throw against Otterbein to break the school’s single-season record of 20, which he now shares with Jason Vrable.

The 5-foot-10, 185-pound Walker also could set a few school gridiron records himself this weekend. Currently, he is four touchdowns shy of equaling Dante Brown’s career mark of 54.

After last Saturday, Walker has 3,873 career rushing yards. The talented RB needs just 193 all-purpose yards against the Cardinals to reach the milestone 5,000 for a career.

Against Capital, Marietta College had over 500 yards of total offense.

Meanwhile, not far from Columbus over in Westerville, Otterbein was getting mauled by visiting John Carroll University (6-3, 6-2), 52-16. The Cardinals have lost two in a row and three of their last four games.

A win against Marietta would give OU a winning fall campaign on the gridiron. But the Cardinals have allowed 50-plus points in their last two OAC contests.

Otterbein is expected to be the underdog Saturday, but MC is very mindful that the Cards did defeat Baldwin Wallace during the season, something that the Pioneers did not do. OU also had a 454-366 advantage in total yards versus John Carroll.

Look for Logan Stepp to take center snaps for Otterbein. One of his primary targets will be Julian Lowe. A couple of others are Hunter Joseph and Payton Vanderkooi.

Stepp is very mobile, like Fields of MC, and won’t hesitate to run the ball. Against the Blue Streaks, he had 124 stripes on 17 totes. If he gains 102 yards against the Pioneers, he will become the first player in league history to throw for 2,000 and rush for 1,000 yards in the same regular season.

“It all starts upfront with Logan Stepp,” Waddle said. “He’s a really special player, and he’s a senior playing in his last game. So, defensively, we’ll have our hands full with him.

“He’s also got a couple of tremendous wide receivers to pass the ball to.”

Waddle said that Otterbein is a “very active, well-coached group” on defense.

“They’re a little different than some of the other teams that we’ve played,” the Pioneer boss added. “They have a three-man front, and they want to stunt and get penetration.

“They’re not huge, and that’s going to be a different look than what we’ve seen. They’ve defended the run very well. So, there’s going to be some challenges there to try to run the football. I’m sure they’re going to try to take some things away from us. We just have to go out and execute.”