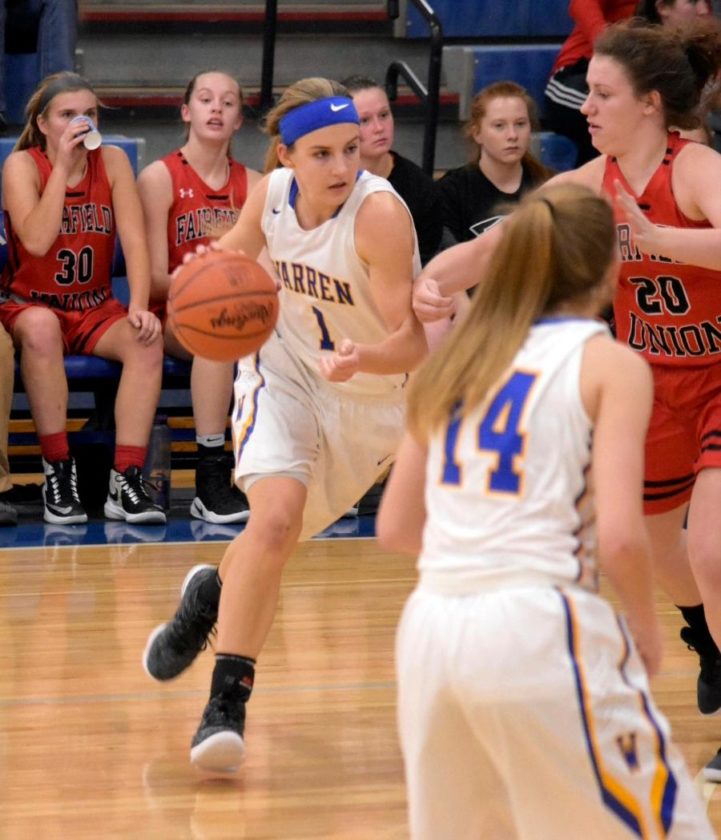 VINCENT — Warren High featured a balanced attack and a hard-nosed D in its season and home opener.

The Warriors were hard to guard as they drilled visiting Fairfield Union, 67-42, in girls’ hoops action Saturday night.

“We’re very deep, deeper than last year, and I played everyone,” said seventh-year WHS head coach Amy Colgrove. “They all gave great minutes. But we’ve still got a long way to go and a laundry list of things to fix. For the first game, I’m happy where we are, though. We did some things right, and it was promising.”

Kate Liston paced the royal blue and white winners with a game-high 16 points. Emily Jackson and Peyton Bowe each added 14 markers, and freshman Olivia Alloway had 11 of Warren’s 29 bench points.

“She doesn’t play like a freshman,” said Liston of Alloway.

“She’s something else. She’s a huge part of our team.”

“That’s a good way to start the season,” the senior Warrior continued. “It was very exciting. Everyone was hyped. It was good to see everyone step up and play where we needed to. People came off the bench and had a good performance. Anyone that goes on the court can do the job, and that’s why we won this game. But we still have some things to work on.”

Liston and Alloway each had seven points apiece to help Warren stake itself to 22-10 first-quarter advantage. In the second stanza, the Warriors continued to play tough defense and maintained the lead, 35-22, at halftime.

Fairfield Union (0-1) struggled from the outset with its shooting and taking care of the basketball. In the contest, the Falcons made only nine field goals and turned the ball over 20-plus times. They actually scored more points from the charity stripe (22) than they did from the floor.

When FU last played Warren, it was in the sectional final at Logan High in February, and it dropped a 52-42 decision to the Warriors.

In the third period, WHS outpointed the Falcons, 24-9, and its lead bulged to 28 points (59-31). Jackson had the hot hand with seven points, and Bowe buried five freebies on three trips to the line.

“I even had two people start the second half that didn’t start the first half,” Colgrove said. “That’s just the way it’s going to be.

“We’ve got some young kids, but we also got an experienced group. It’s a good team, a good bunch of girls.”

FU was stuck on 23 for most of the third, and didn’t score its first field goal until about the 3:23 mark. In the fourth quarter, the Falcons scored all 11 of their points from the foul line.

“They still played us tough,” Colgrove said. “That coach (Jamie Puryear) has a good team, and he does a good job.”