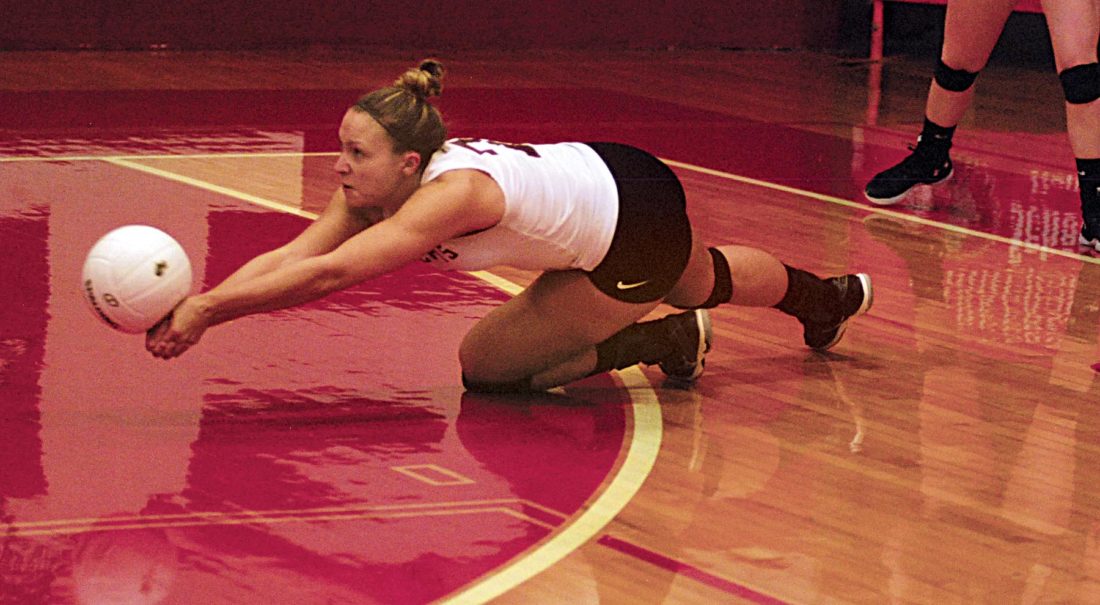 Photo by Jay W. Bennett Williamstown’s Skylar Watson dives for the volleyball during a regular-season match inside PHS’ Memorial Fieldhouse. Watson was honored on the W.Va. High School Volleyball Class A All-State team as voted on by the West Virginia Sports Writers Association.

PARKERSBURG, W.Va. — Senior setter Katie Frazier helped Wirt County to its second state volleyball title in the past three seasons and for her efforts the Tiger was named captain of the Class A all-state first-team by the West Virginia Sports Writers Association.

Wirt County, which garnered its 11th overall state crown to tie Parkersburg High for the most in Mountain State history, finished with a school record 48-3-3 mark. That included a pair of wins during the regular season against now three-time defending Class AA state champion Philip Barbour.

“I can’t say anyone on this team ever thought we were really good this year,” said Wirt County head coach Janet Frazier. “At practice, we only talked about what we needed to fix or do to get stronger. I don’t think the girls even knew what our record was most of the time.

“During the season, they just knew they wanted to win their last game in Charleston and whatever it took to get that done, they were willing to do. Katie spent many hours after school in the auditorium over the winter months the last couple of years just working on ball contact.”

Along with serving up 117 aces and putting down 78 kills, Frazier finished with 1,272 assists.

The Tigers also landed senior outside hitter Haley Moore on the first team as the orange and black tandem were the only repeat honorees. For the third straight season, Moore finished with a match-high kill total in the finals. Overall, she produced 554 downed spikes, had 60 aces and 57 blocks.

“This group of players started working on volleyball back in the fifth grade once a week after school,” added coach Frazier. “By the time they got to high school, they had some good fundamentals.

“Thankfully, they added a few underclassmen to complete the team. They turned out to be kind of a puzzle that somehow fit together and held strong.”

One of those pieces was sophomore Kylie Stephens, who also grabbed a spot in the top unit after registering 447 kills with 55 blocks while hitting better than .400.

Ritchie County, which finished runner-up to the Tigers in the state finals as well as in the Little Kanawha Conference championship match, was represented by senior libero Cassie Tallman (77 aces and 421 digs) and junior Abi Haught (67 aces, 242 digs, 357 kills, 37 blocks).

The senior Hill once again helped the Crusaders to the final weekend of the season and complied 33 aces, 182 digs and 277 kills.

East Hardy, which rallied from a 2-0 deficit in the 2016 state finals to upend Wirt County, landed senior Abby Wilson. The masher had a Class A-best 609 kills while also amassing nearly 450 digs, 40 aces and 50 blocks.

Ravenswood senior Skylar Mace, who was runner-up for LKC Player of the Year honors behind Frazier, failed to make it out of the sectional with Wirt County and Williamstown. However, Mace was nearly unstoppable at the net. The Red Devil had 547 downed spikes, 239 blocks and 80 aces.

Senior libero Skylar Watson of Williamstown, who helped the ‘Jackets reach the state tournament in each of her four years, had 517 digs, 23 assists and finished a trio of aces short of the century mark.

Junior Silver Knight teammate Alexa Johnson, who had 447 kills and 99 blocks, was pegged as the captain of the second team.