Williamstown netters off to state tourney 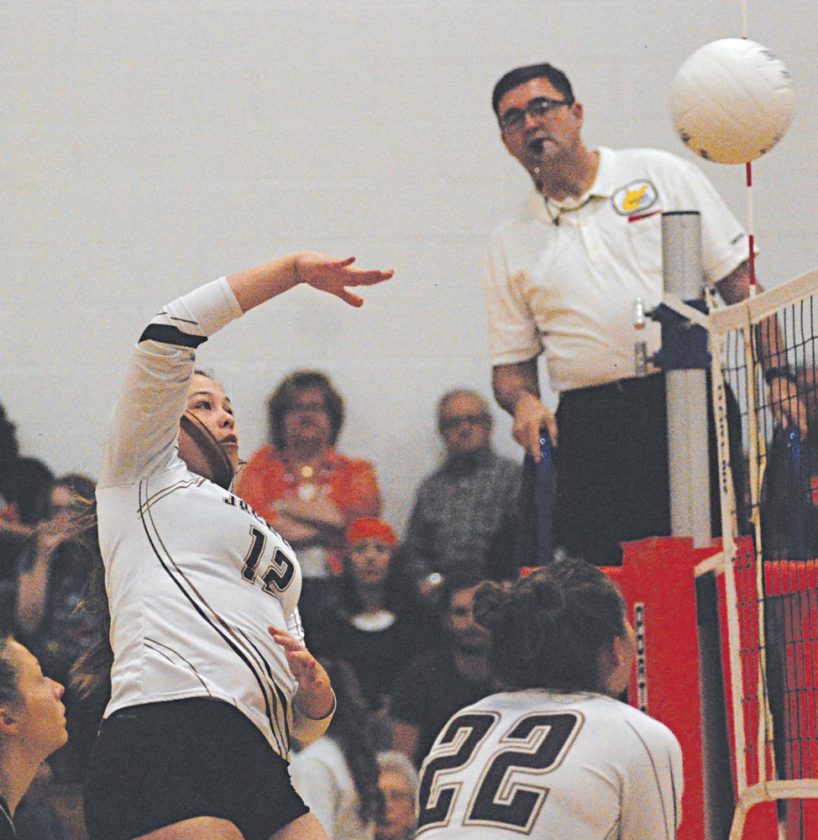 Williamstown's Faith Hoosier records one of her 13 kills during the Class A, Region IV semifinals against Tolsia on Saturday in Elizabeth, West Virginia. The Yellowjackets finished runner-up to host Wirt County and advanced to the state tournament, which begins Friday in Charleston. Photo by Jay W. Bennett.

ELIZABETH — Freshman Emma Wyer’s mash on a bad serve-receive set up match point and sophomore Kylie Stephens followed with the final kill of the evening as host Wirt County swept its way to the Class A, Region IV championship by topping Williamstown 25-13, 25-13 and 25-17.

Defense was the name of the game for the orange and black against the Yellowjackets as libero Emily Cottrell had 16 digs, Taylor Anderson had 15 and Mahala Greenleaf a dozen.

“I have to have a shout-out for Taylor, Miss Emily and Mahala,” said Wirt County head coach Janet Frazier, whose squad is trying to reach the Class A state finals for a third straight campaign. “Their passing was spot on today. I don’t know if I’ve ever seen them pass so well and that just makes the game flow and we were able to do the different things and they were really the key today I feel.

“They were focused today on doing their jobs. I’m just really happy about that and then everyone else was able to do their jobs, but it has to start there. When our passing is off we have not done well in games, but they were on today.”

Haley Moore led the victors with 18 downed spikes. Stephens finished with 15 kills, Wyer had nine and Loden Campbell had a quartet with a match-high five blocks.

The Tigers also had some solid serving from Alexis Petrovsky, who tallied 14 points with four aces. Wyer chipped in four blocks and setter Katie Frazier had a match-high 45 assists.

Williamstown (23-21-4) didn’t take its first lead of the match until set three when Bethany Arnold, who had 10 kills and three blocks, put one to the floor to open the set.

A Faith Hoosier and Kayla Bauman double block coupled with a service tally from Tori Tadlock later tied the set at eight apiece, but a Moore kill started a decisive 7-1 run.

“Like everybody, we just wanted to win that first match just so we could go (to state) and especially for the two seniors (Tadlock and libero Skylar Watson) and you know, Wirt is just a really good team and we have to play at our best level in order to beat them. We just haven’t the last few times.

“We have a lot of things we still need to work on if we want to even win another match at the state tournament from everything I’ve heard. It looks like it’s going to be a tough tournament. We have a lot to do in four days of practice.”

Watson recorded an ace and had a finals match-high 17 digs. Tadlock had 15 assists while Hoosier and Skyler Chancellor had four kills each.

Arnold was a beast against Tolsia and had a match-high 21 kills. Hoosier came through with 13 kills and Chancellor finished with 11.

“Faith Hoosier definitely stepped up big for us in that game versus Tolsia and so did Bethany Arnold,” Cole added. “That maybe was one of her (Arnold’s) better games.”

Frazier helped the Tigers to victory against the Irish thanks to three aces, three kills and 35 assists. Greenleaf also had a trio of aces while Moore (14 kills), Stephens (nine), Campbell (seven) and Wyer (six) provided the firepower at the net.

KIDWELL — Tyler Consolidated had homecourt and was coming off a sectional sweep against Ritchie County, but the Rebels turned the tide here early Saturday afternoon as head coach Matt Carpenter’s gang from Ellenboro won the Class A, Region I crown by handing the Silver Knights a 25-16, 25-18 and 25-17 setback.