Bev/Low and Marietta face off today after wins Sunday 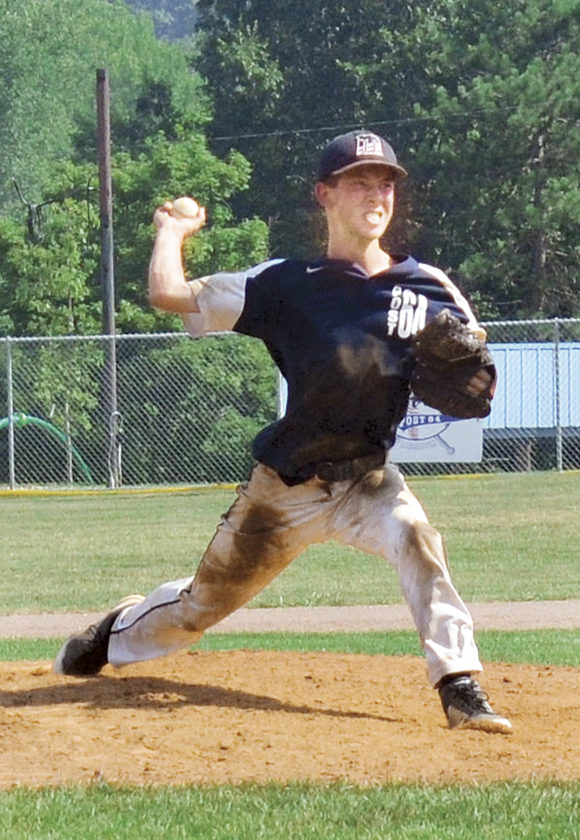 CAMBRIDGE — With temperatures hovering in the low 90s, Derek Duckworth gave all that he had on both the mound and at the plate.

“I’m tired a little bit,” smiled Duckworth. “We did well today. I just tried to throw strikes. I finally got my two-seamer to go and started to get more ground balls instead of line drives. That helped us out a little bit. We also got a few double plays in the middle and that turned the momentum for us.”

At bat, Duckworth hit leadoff and was 3 for 5 with an RBI and two runs scored.

“You’ve got to produce,” he said. “Every run matters in this game.”

With Marietta Post 64’s victory and Beverly/Lowell’s 10-3 triumph over Tuscarawas County Post 205 in another elimination game earlier, the two Washington County American Legion ballclubs will square off for the second time in the District 11 tourney at 3 p.m. today at Don Coss Field. Last Friday, BevLow downed Marietta, 12-5. On the season, Post 389/750 (29-8) is 3-0 versus Post 64 (18-10).

“We’ve just got to beat ’em,” Duckworth said. “We’ve played them three times, and it’s hard to beat a team four times. We’ve got to get ’em.”

Against Zanesville (15-11), Marietta was down 3-0 at the end of one but came back and tied the score in the top of third, capitalizing on two Titan errors. Post 29 finished with six miscues in the contest.

Post 64 then had a four-run fourth to make it 7-3. Highlighting the surge, Kail Hill had a two-run triple. Duckworth also singled home a run, and Zach Cunningham had a sac fly to left.

After the opening inning, Duckworth settled down and threw four straight scoreless frames.

“I’ve coached Derek a bunch of years,” said Marietta coach Deron Alkire. “And there’s no doubt what you’re going to get when you send him out on the mound. He’s one that you know you can stick with and get through the end of the game.”

Zanesville rallied for three runs in the sixth to cut it to one (7-6). But Marietta got two more in the top of the seventh to give itself a 3-run cushion. Post 29 also scored two runs in its last at-bats, but Duckworth gutted it out on the bump and was able to retire the side.

Beverly/Lowell needed a seven-run bottom of the sixth inning to break open a tight, 3-3 game against Tuscarawas ( 7-29).

BevLow southpaw Tanner Neal pitched a 7-inning complete game, striking our four and walking one. Luke Nelson was 3 for 4 while Tate Engle, Logan Isner, Tyler Bradford, and Clayton Cook each had two knocks for the winners. Engle drove in two runs; and Konnor Roberts, Nate Brothers, Kam Hesson, Nelson, Bradford, Isner, and Cook each had one RBI. Drew Huffman scored two runs as did Cook.