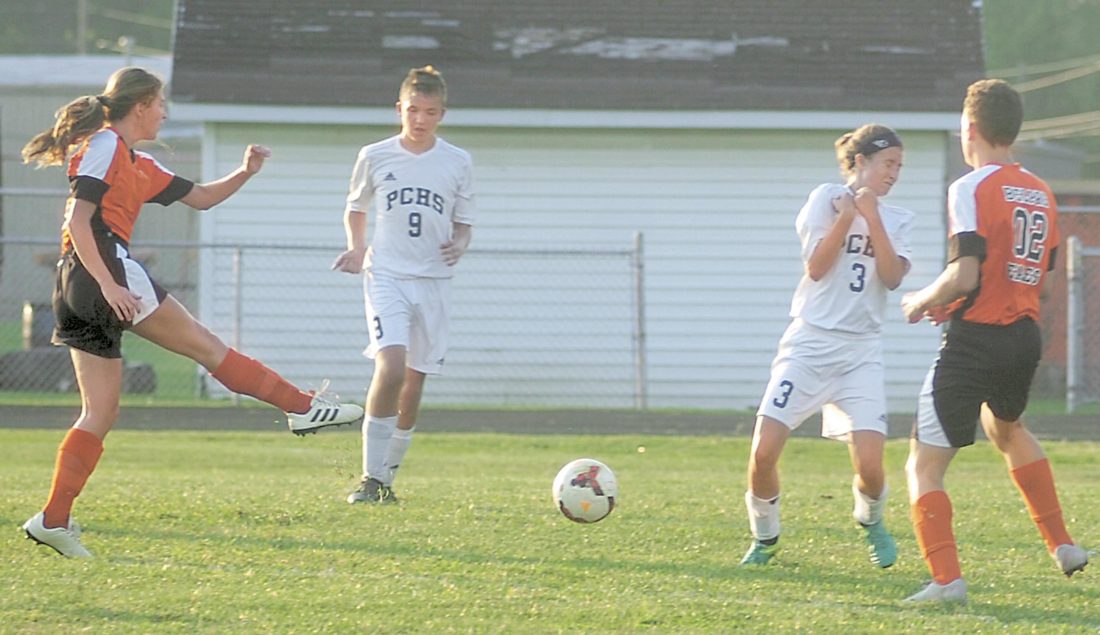 BELPRE–The Golden Eagles had a big win against Parkersburg Catholic’s soccer team Monday scoring 12 goals against the Crusaders who scored one goal in the second half.

The first 40 minutes on the field set the tone for the rest of the match.

Catholic was forced to play a man down due to one of their players, Emma Pfeiffer, being out with a leg injury and Dylan Gordon being unable to play at the moment for his team.

This meant Catholic had to hustle to defend the Golden Eagles constant pressure on the Crusaders’ side of the field during the first half.

The scoring opened up with Belpre’s Andrew Curtis Le, who scored three consecutive goals within five minutes of each other, making the score 3-0 giving him a hat trick.

“We just had good passes and we worked well together, and I lined up getting the ball free and I put it in the goal.” said Curtis Le. “It wasn’t much other than working together and teamwork.”

The next goal scorer for Belpre was Connor Van Fossen and he also happened to score a hat trick Monday evening. Van Fossen scored two after Curtis Le’s hat trick making the score 5-0 at the end of the first half.

Rawlin Barber came in strong during the second half and scored his first goal of the match for Belpre one minute after the whistle was blown. Barber then followed up his first goal with another one four minutes later.

The attacking didn’t stop and Belpre found a way to connect runs on the left and right lanes down the field as Asaphe Santana gained possesion and whipped one passed Catholic keeper Neal Boylin 10 minutes into the second half.

Five minutes later, after Santana made the score 8-0, Catholic responded to the damage with Joe Ferch putting one on the board for his team.

“This was his first official soccer game he’s ever played in.” said Catholic head coach Curt Westrick. “They played hard today. One of the big positives we had today was Joe Ferch scoring his first goal for us.”

Belpre didn’t let off on the attack even as the match neared the end of the second half. Wyatt Fields scored one with eleven minutes left on the clock followed by Santana one minute later grabbing his second goal of the match to make the score 10-1 Belpre.

Fossen completed his hat trick scoring the 11th goal of the match and then his team mate Kiser Windland scored the last goal for Belpre making the final 12-1 Belpre.