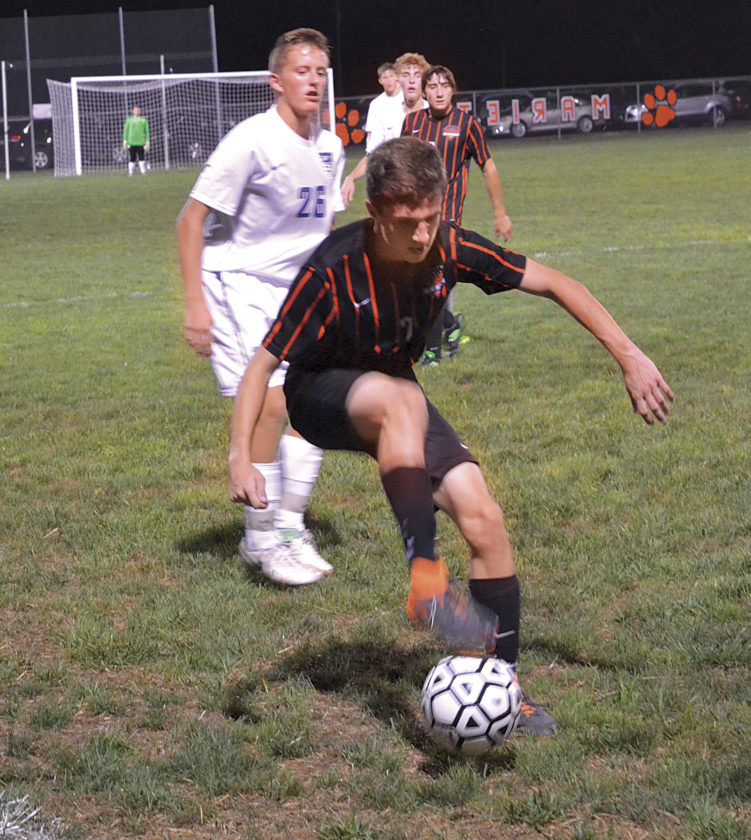 DEVOLA — Kamden Lankford suffered a bloody nose in the first half, and then injured his right leg after the break.

But in between those two mishaps, the Marietta High freshman scored his first varsity goal to help the Tigers defeat Warren, 5-0, Saturday night in prep boys’ soccer action at the Marietta Soccer Complex.

“I think he’s OK, a bruise on the back of his leg,” said MHS head coach Todd Morris.

It was also a night of firsts for freshman Cayden Wheeler and Spanish exchange student Marcos De La Blanca Rubio as each scored their first Tiger goal.

Marietta junior captain Jake Craven led the scoring parade with one goal and two assists, while junior Ryan Mannix also put a ball into the back of the net.

“This one feels good,” said Morris, whose unbeaten Tigers improved their record to 3-0-1. “It’s always good to beat your rival. I know Warren’s a little down this year, but we have a pretty quality side. But we’re still learning on how we want to play. We’re so young with just one senior (Camden May). We’re working in a lot of freshmen, and they’re growing up quickly.”

Winless Warren fell to 0-4 on the season. The Warriors attempted just one shot on frame, and MHS keeper Justin Labarre made the save.

WHS senior goalie Bryar Powell was credited with 13 saves in the match.

Marietta staked itself to a 1-0 advantage in the 11th minute of play when Craven surged on goal from the right flank and slipped the ball past Powell, just inside the left post.

With 6:39 left in the half, Lankford was johnny-on-the-spot when he got a rebound goal off a free kick, which was initially saved by Powell. Earlier, Lankford had to come off the pitch after a ball had hit him in the nose. But gamely, he returned to the action and got himself a score.

Early in the second half, Wheeler put the finishing touch on Craven’s right-side corner kick and stretched the Tiger advantage to 3-0. During the match, MHS took a dozen corner kicks.

During the 54th minute, Mannix got a nice touch pass from Craven, and drilled it home, making it 4-0.

Capping all the scoring, Rubio scored with about three minutes remaining in the game. Mason Wittekind got the assist.

“Our quality in the midfield was just so good,” Morris said. “Ryan Mannix, Cayden Wheeler, Kamden Lankford, and Javi Carrera controlled the midfield. And Jake was great with two assists and a goal.

“I thought Jackson Graham and Jantzen Gebzyck, our outside backs, were great tonight. Kamden, Sean (Fournier) and Adam Coil, at the center backs, were great…I mean, just overall, I think we showed a really quality side tonight.”