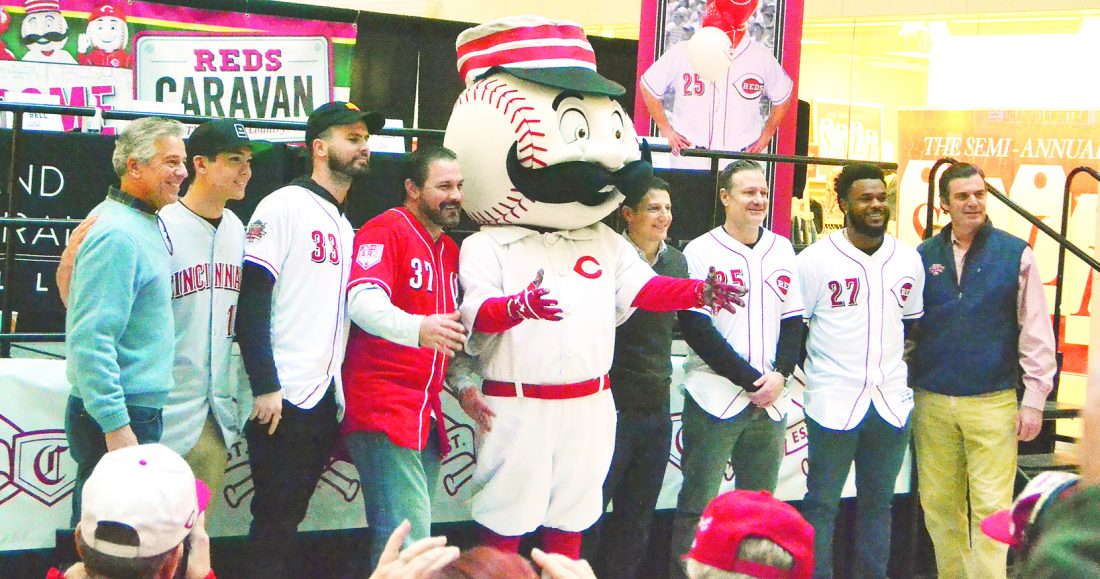 As a matter of fact the Red Stockings are set to celebrate their 150th season when the 2019 campaign gets underway a little more than two months from now.

The product the Reds put on the field figures to be anything but old as the Reds hope to break a string of five years of losing baseball with new talent on the field and in the dugout.

Several members of the Cincinnati organization were on hand Saturday at the Grand Central Mall for the Reds Annual Caravan stop and expectations are rising for a team that has failed to win 70 games in any of the past four seasons.

New Reds manager David Bell made the trip to Vienna and he feels that brighter days are ahead for the storied franchise.

“We are trying to get all parts of our organization to work together to develop players in every way we possibly can,” said Bell, a Cincinnati native who attended Cincinnati Moeller High School. “In order to do that all of these different parts have to communicate. We have so many smart people and so much information and we just need to work that into one piece.”

Bell brings quite a pedigree to the Reds manager position as he is the son of former All-Star third baseman and major league manager Buddy Bell as well as the grandson of former Red Gus Bell.

Brennaman was the master of ceremonies for the mornings activities and the veteran broadcaster of both baseball and football feels a few moves the Reds have made as well as a few more that he anticipates them making should give Reds fans reason for optimism this spring.

“The caravan is always awesome because you get to go out and get around people and you see how excited they are about the Reds and the upcoming season,” said Brennaman, the son of Hall-of-Fame broadcaster Marty Brennaman, who earlier this week announced that he will retire at the end of the 2019 season. “There is a lot to be optimistic about. The last couple of years they were hopeful but not optimistic. This year it’s hopeful and optimistic by some of the moves they have made.”

Among those moves so far have been the acquisition of starting pitcher Tanner Roark from the Washington Nationals as well as outfielders Yasiel Puig and Matt Kemp, starting pitcher Alex Wood and utility player Kyle Farmer in a blockbuster deal that sent disappointing pitcher Homer Bailey and his huge contract to the Los Angeles Dodgers.

Like many other Reds fans, Brennaman has heard all the rumors about the front office looking to add even more starting pitching with names such as Cory Kluber, Sonny Gray and Dallas Keuchel being mentioned as potential targets.

“I really believe they probably have another major move or two left between now and spring training,” said Brennaman. “If they were to go out and acquire a Cory Kluber or a Sonny Gray or somebody like that, all of the sudden they go from being a hopeful or optimistic team to being a bonafide contender.”

Winker and Ervin were both first round picks of the Reds and both saw their first extensive time in the big leagues last year with promising results.

Ervin batted .252 last season with seven homeruns and 31 runs batted in while Winker was a solid candidate for National League Rookie of the Year before suffering a season ending shoulder injury in June.

Winker had secured the everyday job in leftfield and was batting .299 with seven homers and 43 RBI’s at the time of his injury.

With Kemp and Puig joining a crowded outfeld mix that also includes Scott Schebler and top prospect Nick Senzel, Winker is once again healthy and ready to continue his development into becoming one of the best young hitters in the National League.

“My rehab is done and I’ve already started hitting so I will be ready to go for spring training,” said Winker, who will turn 25 years old in April. “You never want your season to be cut short especially with an injury so I just really look forward to picking up where I left off and helping this team win some games.”

The Reds contingent answered questions from many of the couple hundred Reds fans in attendance before participating in an autograph session.