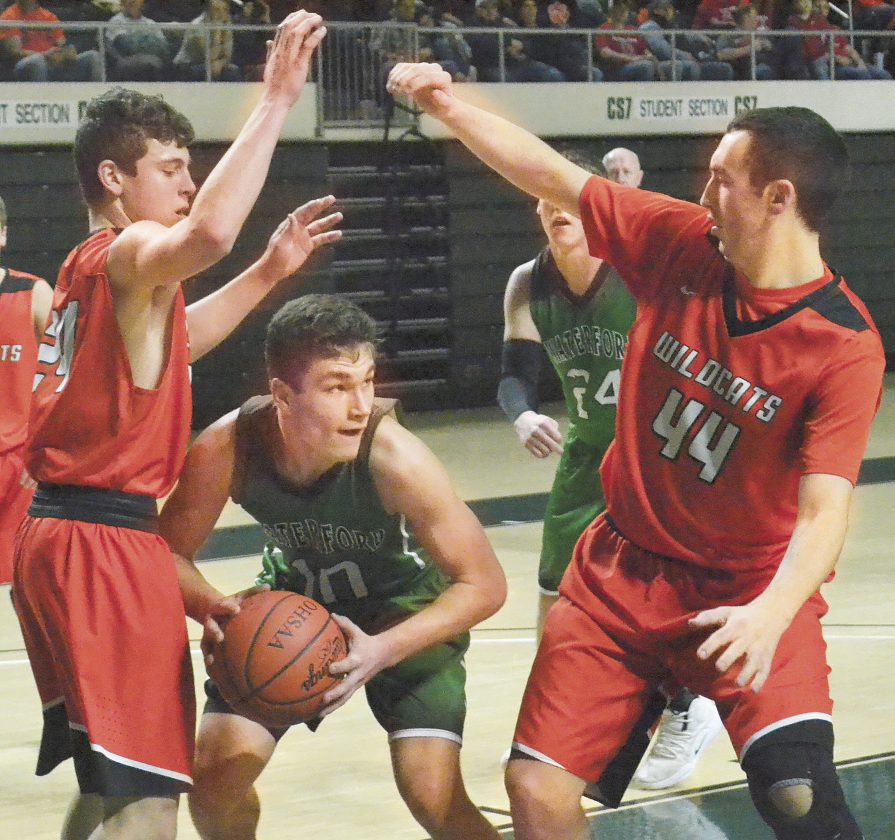 ATHENS — Waterford High played with a lot of confidence.

“It was a great game, wasn’t it?” said Waterford head coach Tom Simms. “We played well.

“The kids came in here comfortable and didn’t get star-struck. I’m real proud of them. They did a good job. They’re having a great run.”

With the victory, the Waterford Wildcats (17-6) are scheduled to play second-seeded Dawson-Bryant in a district final at 8:15 p.m. Thursday at the Convo.

“They’re an outstanding team,” said Simms of the the Hornets from Lawrence County. “They’re well-balanced.

The Whiteoak Cats were paced by Hunter Ruckel’s 13 points and Zach Rand’s 11.

Sparked by Russell’s eight points and Jenkins’ five, Waterford staked itself to a 17-8 first-quarter advantage. The Wildcats were 8 of 14 from the field.

“Russell is just doing a really good job,” Simms said. “I’m just thrilled for him. He’s having a great senior year. His time has come, and I’m just tickled to death.”

In the second quarter, Waterford got a boost off the bench from Heiss, who scored five points. Early on, Jenkins drained a 3 to give Waterford a 25-13 lead.

Just before half, Ruckel’s bucket reduced the Whiteoak deficit to 29-21.

The third quarter was tight throughout with Waterford outpointing Whiteoak, 11-8. Fouss, who went scoreless in the opening half, scored five points in the stanza, and Waterford led by double digits going into the final period.

“Nick got a little nervous, and we had to zoom him in,” Simms said.

Whiteoak fought hard during the final eight minutes, but Fouss continued to have the hot hand, scoring seven points. Young tacked eight more points on to his total, including a pair of freebies at crunchtime to help keep Whiteoak at bay.

“Everybody we put in contributed,” Simms said. “Luke (Teters) stepped out on (Ruckel) on that shot at the end of the half — and it was huge taking that bucket away from him.”