MC baseball gets first sweep of year vs. Wilmington 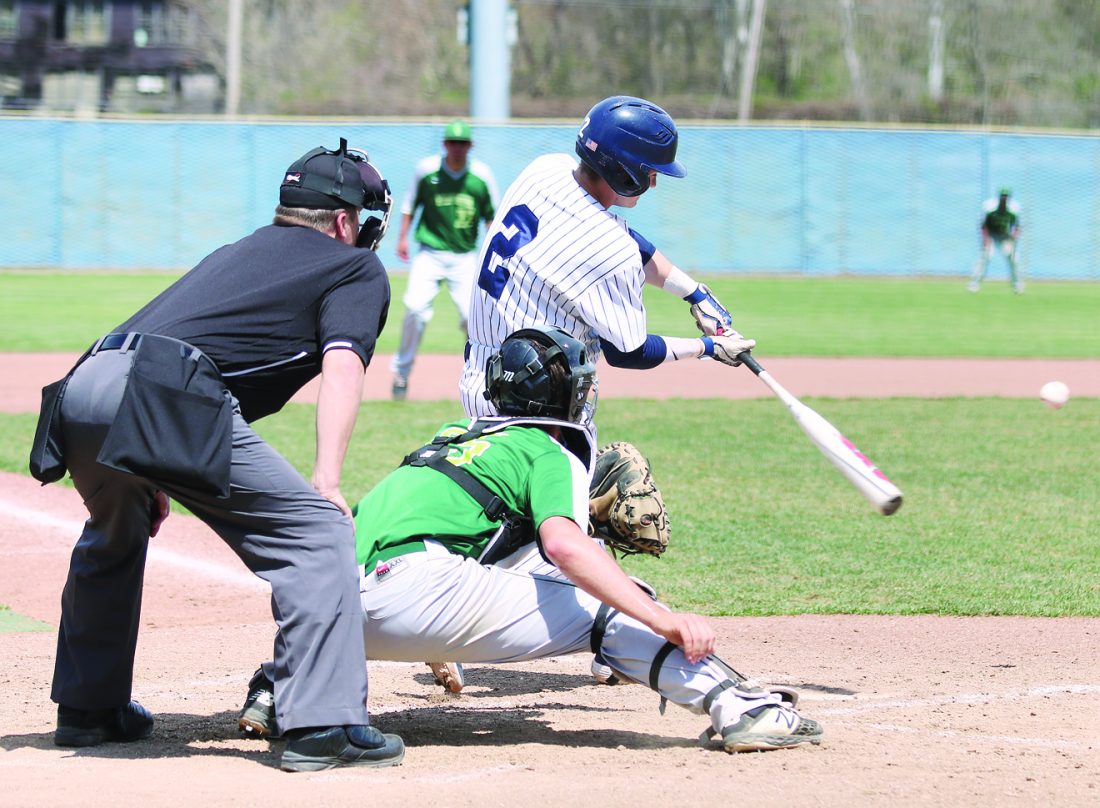 Marietta College had not been swept in a doubleheader all season long.

By the same token the Pioneers had not swept one either as they entered Saturday afternoon’s double-dipper against Wilmington having settled for splits in all five of their twinbills. That all changed Saturday as in front of a large crowd on the 21st Annual Community Day at Don Schaly Stadium, the Etta Express scored a thrilling come-from-behind 8-7 win in the opener and then routed the Quakers 16-5 in the night cap.

“This was much needed. We’ve been up and down and I thought the best 18 innings of baseball we played was a week or so ago against Mount Union and we only salvaged a split,” said MC head coach Brian Brewer. “We stayed in it and kept it close in game one and were fortunate to come out with a W there and then started swinging the bats really aggressively in the second game.”

Early on the prospects of a sweep looked rather bleak as the Pios trailed Wilmington by five runs heading to the bottom of the sixth inning.

Run scoring base hits by Antonio Miller and Gage Bley in the top of the sixth had given Wilmington a 7-2 lead and left Marietta with just four at-bats to rally. The Pioneers got those two runs back in the bottom of the sixth on an RBI base hit by center fielder Seamus Kenneally who eventually came around to score himself on a wild pitch. Marietta drew even closer in the bottom of the seventh when they plated another run on a single by Drew Holderbach but stranded a pair of base runners when Kenneally lined out sharply to left field to end the inning.

While the Pioneers were chipping away at the lead, an outstanding relief effort by sophomore Brenden Lacorato kept the Quakers within striking distance.

Lacorato allowed just one earned run and five hits while fanning eight in four and a third innings of quality relief.

“That’s two really good outings for him,” said Brewer of the 6-foot-3, 235-pound reliever. “He did a really great job and a key was in the seventh when they got a lead-off triple and he kept them from scoring.”

The Pioneers completed their comeback in the last of the eighth and it would be pinch-hitter Greg Peffley getting things started by dropping a double inside the left field line.

Sophomore third baseman Damian Yenzi followed by jumping all over the first pitch thrown to him by Matt Oney and sending the ball sailing well over the 330 sign in left field for a game-tying two-run homer.

“He’s just our guy, the kids fed off of him and he’s a super-tough kid,” said Brewer of Yenzi, whose long-ball was his first of the season. “He’s got a great motor and we just have to make sure we stay on him sometimes and he stays locked in.”

Pioneer first baseman Mike Hale capped the rally when he singled sharply up the middle to score Page and give the Pioneers an 8-7 lead.

Pio closer Sam Mathews replaced Lacorato in the top of the ninth and allowed a one-out basehit to Jake Hyatt before fanning Kasey Bottorff for the second out of the inning.

After Hyatt moved to second on a wild pitch, pinch-hitter Gavin Perkins lined a single to right field where Page fielded the ball quickly and fired a strike to catcher Brady Cottom who tagged out Hyatt just before he touched the plate to end the game.

“We were in ‘no doubles’ defense and Coach (Chad) Langley told me the pinch-hitter didn’t have a lot of pop so we brought our rightfielder in a couple of steps,” said Brewer. “Alex has a plus-arm and fortunately he hit it right to him. He made a great throw and what a great way to win a ball game.”

The Pioneers completed the sweep in the second game in much easier fashion as they scored eight times in the fifth inning and five more times in the sixth to break open a close ball game.

Marietta pounded out 18 basehits in the nightcap including four by freshman shortstop Drew Wilkinson and three each by Yenzi and Page.

Yenzi went six-for-eight in the doubleheader while Wilmington’s Bley collected seven hits in nine trips to the plate.

Wilmington slipped to 6-21 overall while the Pioneers improved to 12-14 with a chance to pull back to .500 Tuesday when they travel to Muskingum.

The pair of wins was not only big for the Pioneers chances to stay alive in the OAC as they improved to 6-4, but was also big to score a dramatic win in front of their largest crowd of the season.

“It’s a huge event and the kids are really excited about it,” said Brewer. “We are just thrilled to have the opportunity to give back to the community. This entire community has done so much for our program for a long, long time and if there is anything we can do to throw a little thank you to them and show some appreciation this is it.”