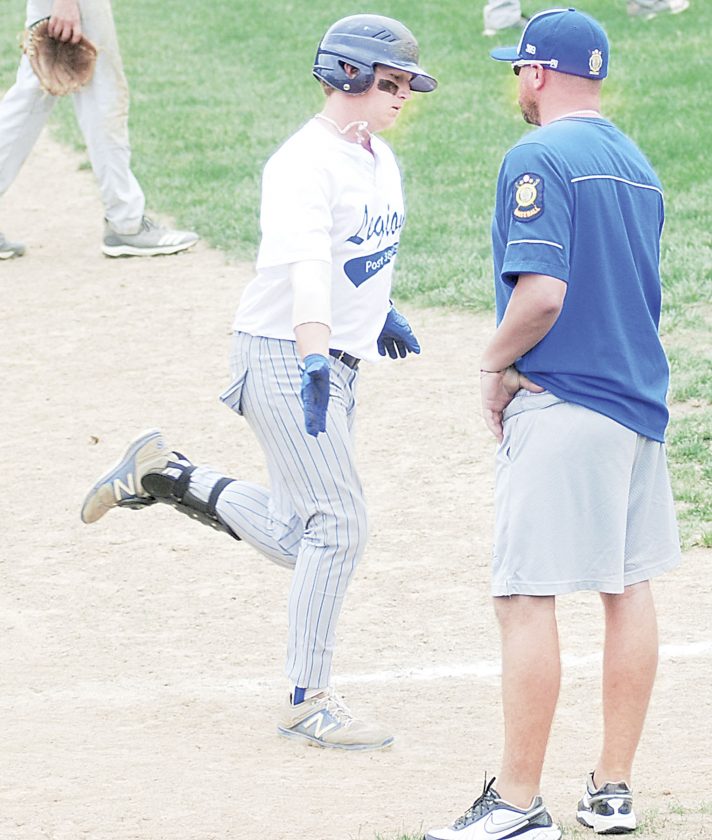 MIKE MORRISON, The Marietta Times Beverly/Lowell’s Tate Engle is congratulated by third base coach and brother Tyler Engle after belting a grand slam in the first inning of the second game of a double-header against Tuscarawas on Sunday.

BEVERLY — Beverly/Lowell Post 389/750 shortstop Tate Engle was beginning to wonder if he would ever collect a run batted in this season.

Despite banging out seven doubles in the first six games, Engle entered Sunday’s doubleheader against Tuscarawas Post 205 still looking for his first run batted in.

Engle finally broke through with an RBI double in the fifth inning of the opener and then collected four with one swing of the bat when he launched a grand slam in the nightcap as Post 389/750 rolled to a sweep of Tuscarawas by scores of 14-4 and 19-4.

“Tate has really been hitting the ball well and locked in but he hadn’t been getting any RBIs,” said Beverly/Lowell head coach and Tate’s father Todd Engle.

“We hit him in the three hole in the opener and after he got a couple more hits without knocking in a run he asked me what he had to do to get an RBI and I told him to hit it over the fence. It was good to see things come out that way.”

Engle wasn’t the only Beverly/Lowell swinging the bat well Sunday as the “Boys of Summer” collected 32 basehits while scoring 33 runs in the double header sweep.

Early on in the opener Tuscarawas looked to be a formidable opponent for the defending state-runnerups as they scored a pair of runs in each of the first two innings off of B/L starting and winning pitcher Brett Gandee to claim an early 4-1 lead.

BevLow answered by scoring five times in the bottom of the second with catcher Clayton Cook and left fielder Seth Dennis collecting a two-run hit apiece.

Gandee settled down nicely on the mound as the Warren Warrior allowed just one hit over his final three innings of work.

The B/L offense scored three times in the fourth and four more times in the fifth with an RBI single by Eric Isner giving them a 10-run lead and bringing the opener to an early finish.

While Beverly/Lowell took a bit to get going in the opener they wasted no time at all jumping all over Tuscarawas in the nightcap as they scored 12 runs in the first inning and never looked back.

The first 11 batters reached base including five consecutive basehits to begin the game as no less than 17 batters came to bat.

Engle’s grand slam was the biggest of 11 first inning knocks that also included doubles by Cook and Kam Hesson.

Recent Warren graduate Drew Huffman was the beneficiary of all of the offense as he collected the win after the lefthander fired four quality innings, striking out seven and walking just two.

Isner went a perfect four-four in the double header while Dennis (5-7) and Bradford (4-5) were among others who had big days at the plate for Beverly/Lowell which improves to 7-1 on the season.

The wins were god ones for B/L after suffering their first loss of the season yesterday in a double header split at home against Cambridge.

“They (Tuscarawas) played a doubleheader yesterday as well and when they showed up here with only 10 kids and shorthanded on the mound we knew we might have a big day at the plate,” said Todd Engle. “We didn’t hit very well yesterday so we needed to swing the bats well today and we did.”

Beverly/Lowell next scheduled game is Saturday on the road at St. Clairsville.