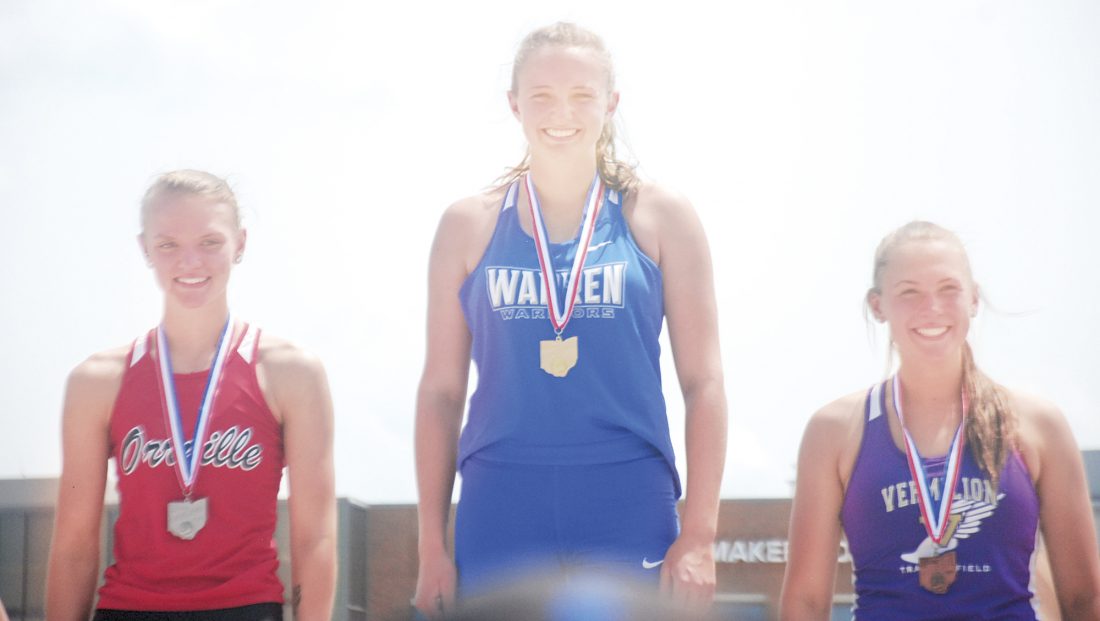 It was, however, the Warren senior’s first time at the top.

Bogard cleared 12 feet, 2 inches at the state track meet Saturday to bring home a Division II state championship to Vincent. It was the first individual state title in program history.

“It felt great,” Bogard said. “It’s been four years. Been here four times, and to go out on top feels amazing.”

Bogard placed fourth at state last year with a top mark of 11-8. She came in as the top seed at state this season and did not disappoint.

“Last year, I had the same pressure,” Bogard said of having a state title on her mind. “I came in pretty high. I think this year I just knew I could do it. Everything had been coming together the past week.”

“It felt amazing,” she said. “The first height is always kind of nerve-wracking. You don’t know if you’re going to make it or you’re going to miss it. Districts last year, I almost didn’t make it. To go over first attempt on everything was amazing. There was no stress to it. Just getting over it and getting to the next height.”

Bogard then cleared 12-2 on her first attempt before watching her three remaining competitors bow out. Once her first-place finish became official, the Warren faithful in the crowd gave Bogard a nice ovation.

She embraced Pat Wigal, who’s been her pole vault coach for years.

“He started me into (pole vaulting),” said an emotional Bogard. “He coached me through seven years now.”

Wigal has coached many of the area’s top pole vaulters over the years and was proud to see one of his athletes win gold at state.

“I’ve known her since she was a baby almost,” Wigal said. “Coming up all along I was recruiting her. I’d tell her ‘You’re a pole vaulter. You’re a pole vaulter.’ Sixth-grade year I slipped her out, got her a little taste of it. By seventh grade she was all-in and it’s been all-in since. She was way above average as a freshman and sophomore. She decided she wanted to be a champion. She got in the weight room and started doing the work it takes to be a champion.

Bogard reflected on her journey to becoming a state champion.

“A lot of frustration,” she laughed. “A lot of making great attempts at a height and never getting it. There’s a lot of work put in. A lot of offseason time. Whenever you make your PR, usually like the next meet you do terrible and it puts you in a headspace you have to try to dig yourself out of. It’s an amazing time though. It’s so much fun to go through it.”

Being a four-year state qualifier, nerves were only an issue for Bogard momentarily.

“She was a little nervous to start, but I think everybody is at the state meet,” Wigal said. “She worked through it. She’s a veteran (who’s) been doing it a long time. Worked through the butterflies and just started clearing bars first attempt, and that’s what puts you on top of the podium.”

Bogard became Warren’s second All-Ohioan after sophomore Millie Ryan placed sixth in the discus Friday. She PR’d with a throw of 126-11.

Belpre’s Eli Fullerton also left Columbus as an All-Ohioan. The Golden Eagle sophomore finished sixth in the 3200 in Division III and made the podium for the first time. He clocked in at 4 minutes, 43.43 seconds.

“It feels good to bring it home to Belpre,” Fullerton said. “A lot of hard work’s gone into it.”

Fullerton ran a strong race and was in the top four most of the race. He got passed by a couple runners in the final 100 meters and finished .05 seconds behind Cedarville’s Ethan Wallis in fifth.

“I felt pretty good,” he said. “I think I started out a little too fast, but eventually I got my pace back.”

In Division I, Marietta’s Baylee Brown came in 12th in the pole vault in her first trip to state. The Tiger senior cleared 11-0 on her first try but was able to get past 11-6.