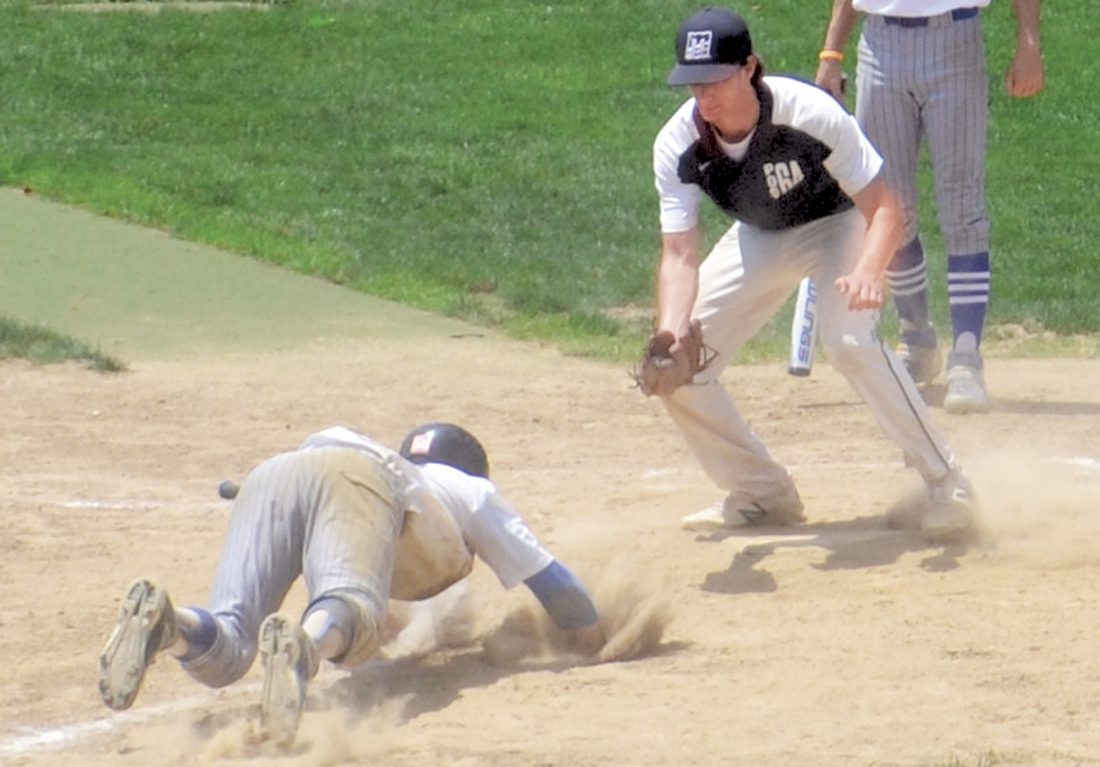 No BevLow batter struck out en route to a 9-3 triumph over Marietta Post 64 in American Legion baseball action Saturday at Fort Frye High.

“We’re starting to hit better,” said Beverly/Lowell skipper Todd Engle. “Obviously, when we went down to the beach, we faced some pretty tough competition and saw some pretty good arms down there. That’s helped us, because when we got back here, we’re not really scared of anybody’s arms.”

BevLow (15-3) rapped out 11 hits and was only retired in order one time by Marietta pitching in the contest, in the fourth inning. Seven of its nine batters had at least one hit.

Tate Engle, Drew Huffman, Seth Dennis, and Maeson Long each drove in a run, while Tyler Bradford, coming off a 3-homer game Friday night, added a two-basehit and an RBI.

Righty Kam Hesson pitched 5.2 innings and got the win. Kurt Taylor threw an inning and a third of scoreless ball.

“Kam pitched well,” Engle said. “He’s been one of my better arms the last couple of years.

“Kurt was in a 7-on-7 (football) scrimmage today, and I hate to think how many throws he had. I mean, he’s probably thrown 60 passes today.”

Beverly/Lowell had just one miscue in the game.

“We feel pretty good about where we are at defensively and what we’re doing off the bump,” Todd Engle said.

Marietta (10-7) finished with four singles in the contest. Corbin Alkire and Jarrett Jackson each drove in a run, while Kail Hill scored twice.

Lefty Mike Reeder started on the bump and suffered the setback. Hill and Justin Thompson both threw in relief.

“Our kids didn’t play that poorly,” said Post 64 field general Larry Hiser. “We actually played better this time around than the last time we faced them. We’re getting better against good teams.”

Engle said the Marietta plays “the game the way it’s supposed to be played.”

Sparked by back-to-back RBI doubles by Bradford and Cook, Post 489/750 staked itself to a 2-0 first-inning advantage.

Bev/Low stretched its lead to 5-0 in third with Gandee, Long, and Tate Engle all getting credit for an RBI.

After retiring the first 10 Marietta batters, Hesson gave up his first hit, a single to left by Hill, who later scored on a throwing error, making it 5-1.

In the top of the sixth, Post 64 shortstop Derek Duckworth had a two-out single to left and advanced to second on a walk to Hill. Duckworth then legged it home on Alkire’s single, and Hill did the same on Jackson’s hit, reducing the deficit to 5-3.

“The kids gave us a shot at the end,” Hiser said. “And, one or two swings of the bat would’ve put us on top.

“But you’ve got to give Beverly/Lowell all the credit. They stopped us in our tracks, and then went ahead and extended it, which is what a good team does.”

Beverly/Lowell answered with a bat-around and four runs of its own in the bottom half of the frame, making it 9-3. Tate Engle got things going with a one-out single and that was followed by a Huffman infield hit. After Bradford was hit by a pitch to fill the sacks, Engle raced home on a wild pitch. Cook was then intentionally walked to load the bases, and Dennis plated another run with a groundout. Gandee followed with an RBI single, and after Nate Brothers walked and Nelson beat out a bunt, Dennis legged it home with the fourth run of the inning on a wild pitch.

“They swing it well,” Hiser said. “They’ve been playing for so long, and it makes it hard to defend them.”