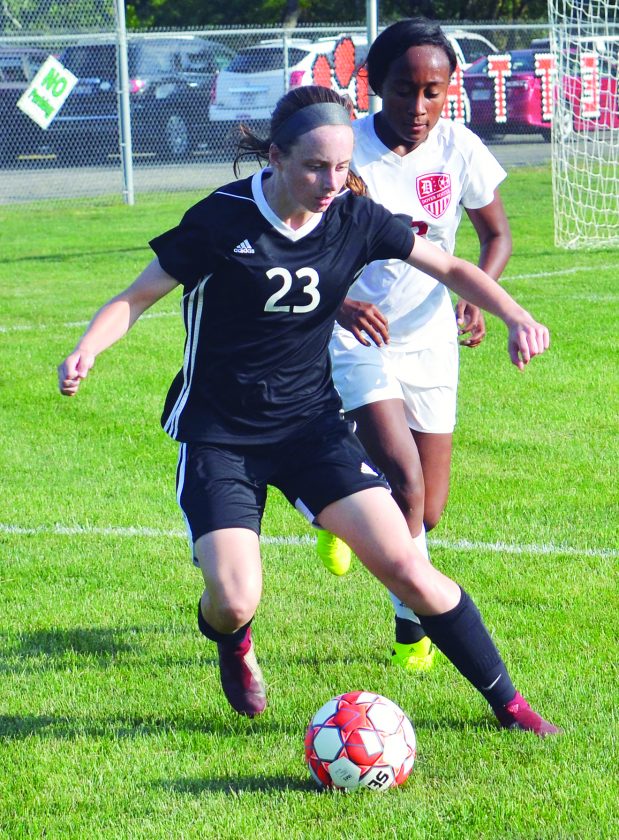 “We had our moments, but I thought we played better yesterday (Tuesday),” said MHS head coach Jeff Price. “It’s good that we had to come back (tonight)…sometimes, it’s harder to come out and play with a lead.

“Anyways, it’s a league game (East Central Ohio League), and it’s our first game and it counts. Now, we have things to work on.”

On the first night of action, Marietta (1-0 overall, 1-0 ECOL) got a boost from its bench in the 14th minute when sophomore midfielder Chloe Chen headed Courtney Schuck’s left-side corner kick past Tornadoes’ keeper Emma Smith into the back of the net.

Then, in the 24th minute, Tiger non-starter Piper Halliday booted a high, long shot outside the penalty box that cleared Smith’s head, making it 2-0.

With 7:22 left in the first half, the match was halted and later suspended by the refs due to Mother Nature.

The plan called for Angie Pinion-coached Dover to return the following evening at 6 p.m. to complete the contest.

The action on the pitch was more back and forth on the second day of the match.

Dover (1-1, 0-1) averted a shutout in the 78th minute when senior forward Bridget Deeds got a loose ball in the goal mouth and drilled it by MHS sophomore keeper Jocelyn Rings to reduce the deficit to one goal.

“I’m not happy about that,” Price said. “We could’ve prevented it by just playing the ball out this way. When you start hitting the ball down there, lots of things can happen. You put it in the mixer, and who knows what’s coming out of it.

“I guess that’s something we have to work on — game management.”

Marietta is scheduled to host Chillicothe in a non-league game at 3 p.m. Saturday, while Dover plays at Tri-Valley at 4 p.m. on the same day.