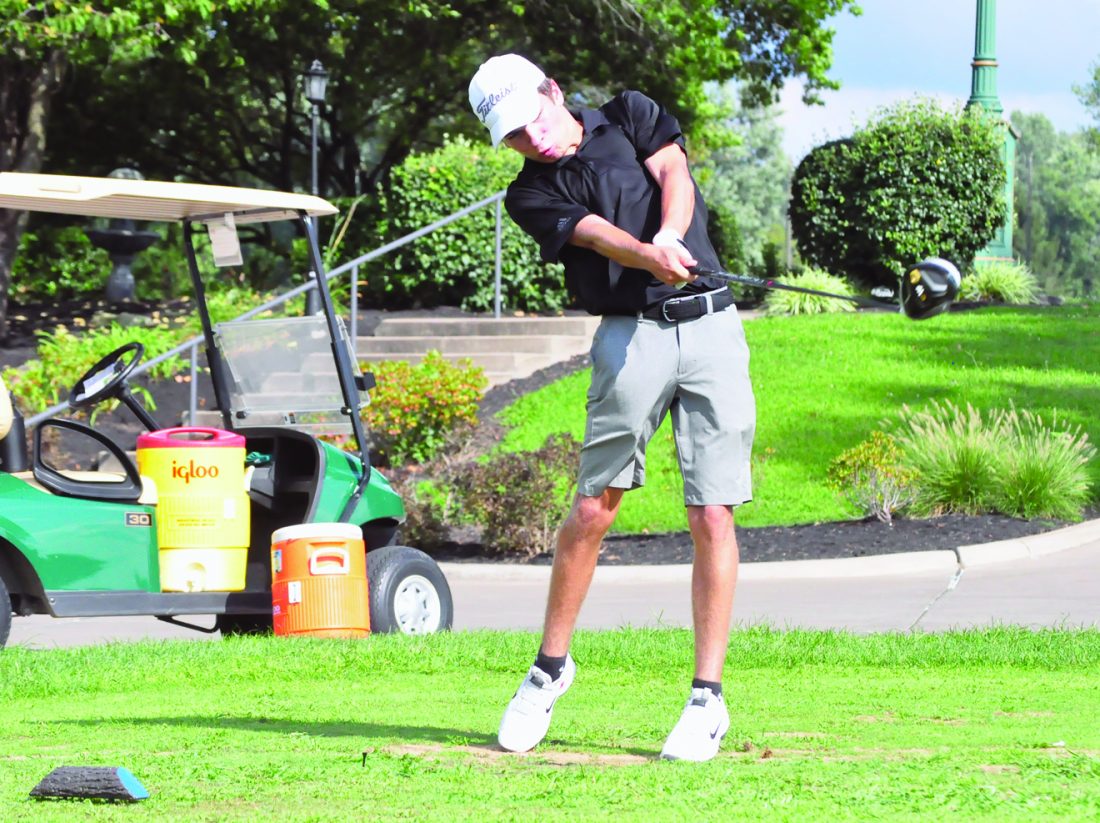 Photo by Tyler Bennett Marietta High’s Andrew Elliott tees off on a hole during a high school golf match against Parkersburg High and Parkersburg South Wednesday at Parkersburg Country Club.

PARKERSBURG — After escaping with a three-stroke win over rival Parkersburg on Monday at South Hills Country Club, Parkersburg South came up just short Wednesday evening at Parkersburg Country Club, losing on a fifth-player tiebreaker to the Marietta Tigers.

Both finishing with a score of 170, Wednesday’s match came down to Tiger Joel Neville shooting a 46 and Patriot Cade Murray carding 50.

Already having played in a tight match which South won last Friday in Marietta, Tigers head coach Bryan Whittekind was exepcting a another close nine holes with the Patroirts.

“It was pretty even today. We lost to South by one on our course Friday,” Whittekind said.

“Pretty even scores with them and then PHS was only two shots off. That’s a pretty good day between three teams.”

The Tigers’ top scorer was AJ Graham with a 40. In second with a 42 was JB Wharff.

Josh Sandford finished with a total of 43. Having trouble on a couple holes, Sandford bounced back toward the back end and started sinking shots. He credited the win to an all around team effort, with only one Tiger shooting over 50.

“I really think it was just an all around team effort. As you can tell, we all shot fairly in the low 40s. That helps. We’re counting on our fifth man for our final score,” Sandford said. “Not all scattered over the place. Whenever we’re all close with scores, it really helps win than these other guys who are kind of scattered all over the place with their scores.”

Justin Hartley shot a 45 and Andrew Elliott ended up with a 51 to round out Marietta’s scores.

Struggling over the past couple of events and at PCC during the summer, South’s Zach Redmon got a confidence boost Wednesday, shooting a 36 to earn medalist honors.

Only bogeying one hole, Redmon hit one birdie and made par seven times.

Redmon credited his success to nailing the majority of his putts on a course he normally stuggles putting on.

“I played here a couple times this summer and kind of struggled pretty much every time I played. Just trying to find something positive about it today and I made a lot of putts, which is unusual here becuase I normally don’t make putts and I made a lot of putts and just kind of kept the ball in the fairway,” Redmon said. “I just felt like it all kind of came together today. So I was happy to see that.”

Blake Synder was second for South, shooting a 43 while Mace Busch (45) and Dustin Corley (46) were close behind. Eli Reeves shot a 57.

“It was really close. Zach Redmon finally pulled through and shot 36 playing really well. The other guys, they played OK but not enough to beat Marietta,” South head coach B.J. Hess said. “It goes back to the fifth players. That’s awesome. It’s cool because it shows the fifth and sixth player they’ve got to shoot better scores. You can’t just give up. It’s crazy how that happens and then PHS shoots a 172. That’s close. We beat PHS by three shots on Monday night and then tonight by two. That’s cool.”

The Big Reds were the only team to have every player under 50, but finished in third place with a total score of 173.

Parkersburg head coach Don Snider was pleased with his team’s scores, saying that the Big Reds are in good standing after two close matches back-to-back.

“I was really pleased with everyone out there. That’s a really good show. I think some of the players left a couple strokes out there,” Snider said. “We lost by two, but I’m sure we’ll find those down the road some place. Overall it was a good day. We’re right where we need to be. Try to just move forward and try to get better for the next match.”

Molly McLean was the Big Reds’ best performer, finishing with a score of 41. Making par on the first four holes, McLean had some trouble on hole No. 5 where she triple-bogeyed. It was a bad tee-off on the hole, going a little bit left and landing in rough.

“I was playing pretty well up until that hole and I thought I finished pretty well,” McLean said. “That one hole did get on my nerves a little bit, but other than that I was pretty happy. I was putting pretty well.

TJ Davidson and Hayden Levitt each shot a 43, Nicole Lincicome carded a 44, Danile Wharton came in with a 45 and Anna Earl rounded out the PHS scoring with a 48.