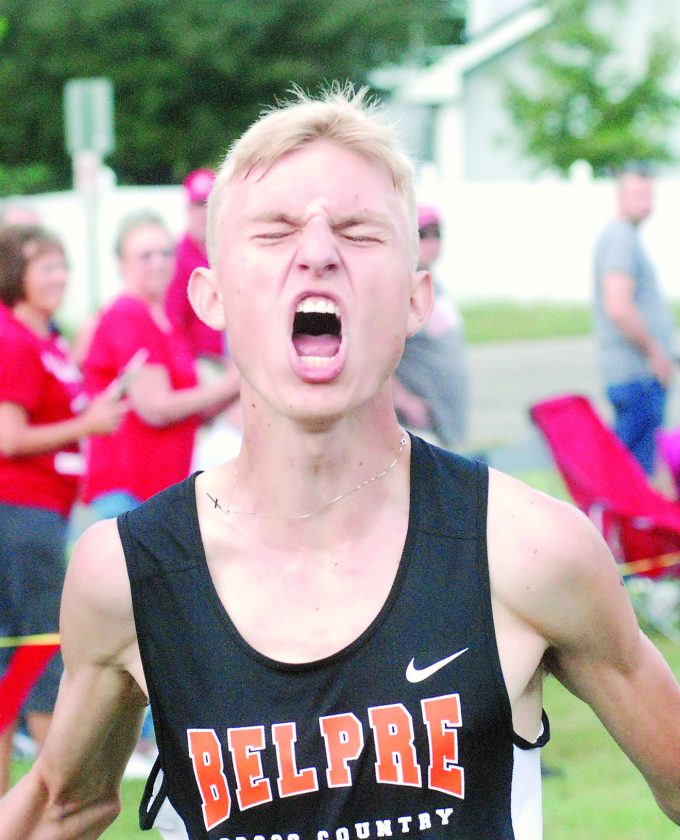 The Belpre junior is a perfect five-for-five this season. Saturday, Fullerton successfully defended his Belpre Invitational title, placing first in the race with a time of 16:04 at Civitan Park.

Fullerton, who expressed his excitement upon crossing the finish line, attributed his red hot start to the training he did in the offseason.

“It feels really good knowing that all the hard work over the summer has paid off, and just getting out there with the team,” he said.

Fullerton admitted winning his hometown race had some added meaning.

“It means a lot,” he said. “Having the whole atmosphere here, know a lot of people from town. Just to defend the title — I knew I had a lot of good competition coming in today. Just tried to keep up with everybody hopefully get them at the end.”

Fullerton held off runner-up Carter Lipscomb from Doddridge County. Lipscomb finished in 16:14, pushing the Golden Eagle and giving him some incentive to finish strong.

“I knew he was a faster runner than me, time-wise, this season so far,” Fullerton said. “I just tried to stay with him for the whole race and at the end I was going to try to pick it up with about half left, trying to wear him out. Once we got on top of the hill over here, I just tried to take it all out.

“I’m just happy to be able to have this God-given gift and to use it for His glory and just show everybody what cross country is and have fun doing it.”

Waterford’s Kaylor Offenberger clocked in at 22:04 to place 15th.

Like Fullerton, Belpre Middle School’s Blake Rodgers not only won his fifth race in five tries, he repeated as the Belpre Invite champ with a time 10:37.

Behind only McDonald’s Anna Guerra (19:29.0), Ella Hesson took home runner-up honors with a time of 20:10.4 to lead the Larry Cassidy-coached ‘Jackets.

On the boys’ side, Williamstown finished 22nd as a team. Alex Cockerham posted the squad’s best finish, coming in 67th with a time of 19:08.