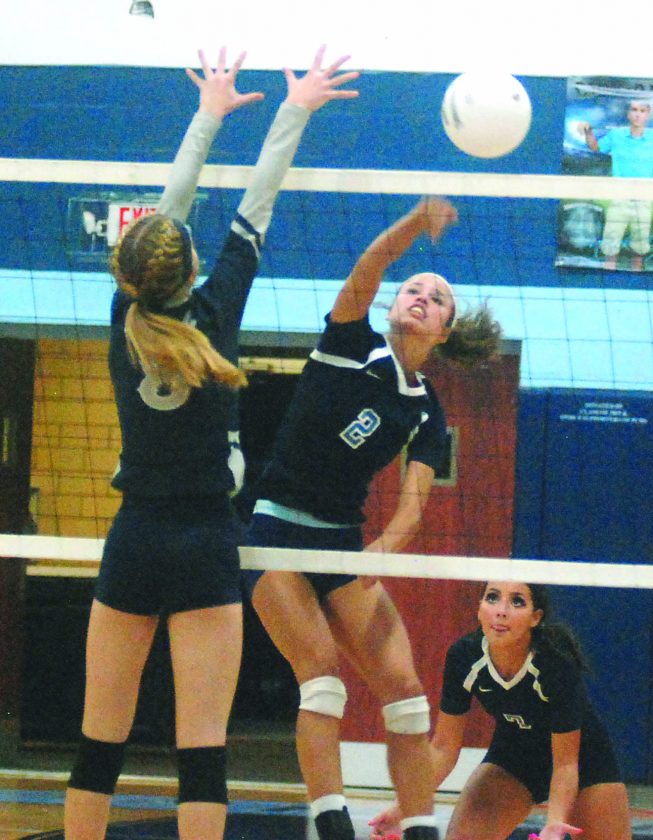 PARKERSBURG — Grace Pedersen made a pair of key digs with set three tied at 18-all here Thursday evening for Parkersburg Catholic as the hosts closed out match point on Ritchie County via a Jenna Boice ace during a 25-13, 25-21 and 25-20 Little Kanawha Conference West Division sweep of the Rebels.

PCHS (8-1-1, 3-0) was able to take advantage of some Rebel errors in the first two sets, but were tied at 18 after three straight service miscues in set three. Pedersen, who had three aces and nine digs, made two big saves during a rally, which led to a Paige Stotts kill and a 19-18 lead the Crusaderettes never relinquished.

“I think this was the most consistently focused my girls have been consistently throughout a match,” admitted PCHS head coach Amanda Weatherwax, who watched Lainie Ross record a baker’s dozen kills, Aaliyah Brunny 10 and Madison Ross five. “We expected Ritchie to come out with a lot of really long rallies because they are a good defensive team and keep the ball in play.

“We have to expect those long rallies and learn how to respond to them and place the ball in a good spot so we can make it tougher on them.”

That proved to be the case most of the evening as the Rebels of head coach Matt Carpenter, who dropped to 13-2 overall and 2-1 in the LKC West, were led by Rebekah Ruppert’s 13 downed spikes.

In the opening set, Ritchie County only trailed 10-9 after Ruppert registered a kill from one of Bri Jones’ 17 assists with Andrea Kirk at the service line. However, a bad pass from the back row resulted in an easy kill for the hosts, who scored seven straight to take control. That included six consecutive tallies from Paige Stotts, one of which was an ace.

Gracie Lowers had two of her match-high six aces early in the second set and Pedersen recorded back-to-back aces as well for a quick 9-2 advantage. Pedersen’s first ace went off the tape and the second double tapped it before falling over. Despite leading 20-12, three straight PCHS service errors helped the gang from Ellenboro get back in it. Although Kirk’s ace and Ruppert’s block on Brunny made it 23-21, Madison Ross found a hole in the Rebels’ back line for a kill. Brunny, with her back to the net, got set point when she flung a free ball over her head which wasn’t returned.

“We gave away too many points at times,” noted Carpenter, who got two aces from Katelyn Lambert. “I didn’t have them prepared and we’ll be prepared when we see them again. You can’t take a thing away from Catholic tonight. They played lights out.

“Their serves were on point all night. We struggled with serve-receive and to stay on the attack. They played great volleyball tonight and I’m not going to take anything away from them.”

Lowers also finished with a match-high 14 digs for the victors, who return to action at 5:30 p.m. Monday with Meigs in a tri at Marietta.