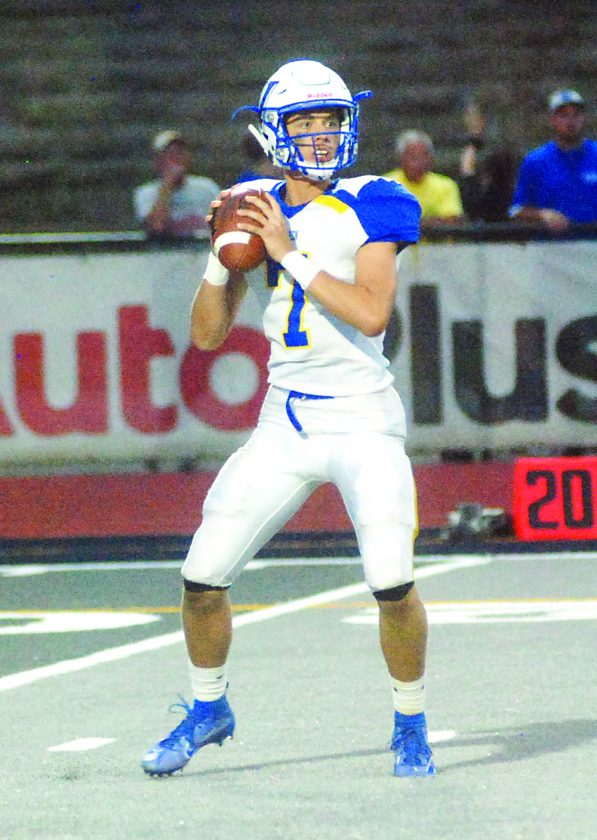 BYESVILLE — The beat continues to roll on for Fort Frye head coach Eric Huck and his Cadets.

Last Friday night the Cadets completely dominated their neighbor and arch-rival Waterford Wildcats 49-0 for their third consecutive win of the season and 20th regular season win in a row.

Tomorrow night the Division 6 Cadets make the trip up I-77 to battle the D-4 Meadowbrook Colts in a non-conference tilt.

In last weeks win over Waterford, the Cadets piled up 362 total yards of offense despite playing without leading rusher Brian Adkins who suffered a wrist injury the week before against Nelsonville-York.

Sophomore Collin Welsh led the Fort in rushing with 79 yards and a pair of touchdowns on 11 carries while senior Tyler Fisher scored twice and added 66 yards on 12 touches and Zane Wallace added 64 yards on 7 carries.

Sophomore quarterback Ian Ellis completed 7-of-12 pass attempts for 57 yards including an 11-yard strike to his favorite target Brady Schilling.

The Cadet defense, which has allowed just 33 points in their three wins, limited the Wildcats to just 48 total yards in the game.

Meadowbrook opened their season with a 14-0 win over John Glenn but has dropped a pair of games the past two weeks to Barnesville (42-27) and St. Clairsville (42-12) respectively.

Quarterback Josh Hupp passed for 228 yards last week against St. Clairsville including a touchdown to Addy Black, who hauled in four pass receptions for 101 yards.

The two teams did not play one another last year however the Cadets are familiar with the field at Meadowbrook as they downed Shadyside there last year in a playoff game.

The Cadets have won 40 of their last 41 regular season games dating back to 2015.

CAMERON W.Va. –The Frontier Cougars have quietly put together an outstanding start to the 2019 campaign as they find themselves 3-0 heading into a Friday night showdown on the road against the Cameron Dragons.

The game will be a big test for the Cougars as they will look to gain a measure of revenge after losing to Cameron 40-14 last year at home.

The 2019 Frontier squad has featured a balanced attack on offense led by sophomore signal caller J.D. Schmidt who is completing nearly 73 percent (43-59) of his pass attempts for 726 yards and 12 touchdowns.

Senior tight end Logan Brookover has accounted for five of those touchdown catches while Noah Barnhart leads the Cougars in rushing with 283 yards and six touchdowns on 34 carries through the first three games.

Tailback Joel Lewis saw his first action of the season in last week’s 46-0 blanking of Bridgeport and made the most of 10 rushing attempts, gaining 164 yards while scoring a pair of touchdowns.

Cameron got off to a tough start with a 61-20 loss to West Greene but have recovered rather nicely with lopsided wins over Hundred (59-6) and Valley (34-6).

VINCENT — After a record-setting performance in last weeks 66-28 win over Meigs, Warren junior quarterback Kurt Taylor will hope for a repeat performance Friday night when the Warriors host the Cambridge Bobcats.

Taylor broke a school record last week by passing for 476 yards and seven touchdowns as the Warriors rolled up 669 yards of total offense to win for the second time in three attempts.

Taylor comes into the Bobcat game completing 65 percent of his pass attempts (45-69) for a cool 924 yards and 12 scores.

The ‘Cats come into the game fresh off of their first win of the season last week as they blanked Carrolton 14-0 after falling to Indian Creek (27-0) and John Glenn (39-7) in their first two games.

Last season in Cambridge the Bobcats handed Warren a 38-8 loss.

REEDSVILLE — A pair of Tri-Valley Conference rivals come into Friday nights game looking to rebound from humbling losses to two of the best teams in the state.

Eastern proved to be no match at all for Trimble as the Eagles were blanked 48-0 while the Wildcats were shutout by Fort Frye 49-0.

The Eagles opened the season with hard-fought wins over Huntington-Ross (47-20) and Caldwell (20-14) before falling to Trimble.

BELPRE — The Golden Eagles will look to even their season mark at 2-2 Friday night when they host Wahama in a Tri-Valley Conference contest at Ralph Holder Stadium.

Belpre came up their first win of the season last week with a convincing 42-7 road win over the Miller Falcons.

Senior Jeremy Weaver had a career-night against Miller as he ran the ball 16 times for 296 yards and four touchdowns.

The White Falcons lone win of the season also came at the hands of Miller (24-20) in week two.

Last week Wahama fell to Southern by a final score of 58-22.

Quarterback Abrahmn Pauley leads the way for the Wahama offense.

SARAHSVILLE — In all the makings of a good one, the undefeated Shenandoah Zeps welcome the 3-0 Barnesville Shamrocks in an early season showdown Friday night.

The Jesse Wells-led Zeps have gotten off to a great start with wins over quality opponents in Malvern and Northridge as well as Reigning Sports Academy.

In last weeks win over Reigning Sports, senior Kendal Sherman scored four touchdowns as he rushed for 105 yards on 18 carries.

Briar Portman rushed for well over 100 yards in the Zeps first two wins and the junior was solid once again last week as he tallied 71 yards on just five carries.

Barnesville downed Buckeye Local (33-8) and Meadowbrook (42-27) to open the season and made it three-in-a-row last week with a 31-20 win over Buckeye Trail.

Caden Lake scored a pair of touchdowns in the final quarter while quarterback Ayden Hannahs completed 15-of-21 pass attempts for 200 yards and three touchdowns, all falling into the hands of Gage Hannahs.

Last years game was a defensive classic with the Zepplins blanking Barnesville 12-0.

CALDWELL — Though this year’s matchup between the Seminoles and Redskins will be a non-conference one with the ending of the Pioneer Valley Conference the rivalry will likely be as strong as ever Friday night at the Noble County Fairgrounds.

The Seminoles got off to a great start with shutout wins over Union Local (21-0) and Bridgeport (48-0) in week’s one and two before allowing 42 points in the first half last week to River before eventually falling 48-27 to the Pilots.

Junior fullback Alex Kilburn is off to a great start for the Josh Ischy-coached Seminoles as he rushed for over 100-yards for the third straight game with 124 yards last week while quarterback Malachi Rose-Burton passed for 155 yards.

Despite the three losses, Caldwell has been in all three of their games including last weeks 26-6 loss to Tuscarawas Central Catholic, a game that was a 13-3 game in the final period.

Redskin kicker Alejandro Poza accounted for all of the Redskins points last week with a pair of field goals.

MCCONNELSVILLE – By the time Friday nights Muskingum Valley League contest between the Tornadoes and the Raiders comes to a close, one of them will have gained a much-needed first win of the season.

Last year in Zanesville, the Raiders scored their lone win of the season with a 48-13 win over the Tornados.