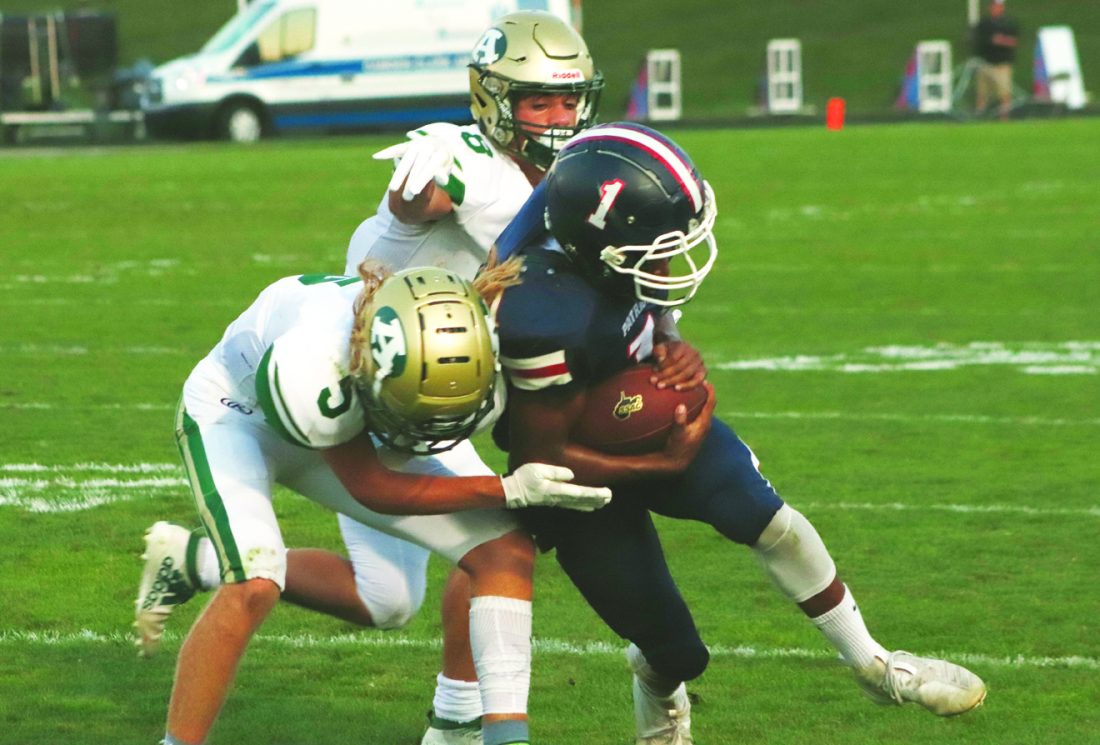 Photo by Joe Albright Parkersburg South quarterback Brandon Penn collides with Athens defensive back Reece Wallace while Nate Trainer looks on during the Patriots’ 42-20 win over the Bulldogs Friday night at Erickson All-Sports Facility in Parkersburg.

PARKERSBURG –The first home game of the year for the Patriots went as planned, as they downed Athens in a 42-20 showing Friday night at the Erickson All-Sports Facility. Brandon Penn did Brandon Penn things, and he torched the Bulldogs through the air and on the ground. The senior quarterback ran for 196 yards and three scores to set the tone, taking a 9-yarder, 74-yarder and 42-yarder to the house, respectively. On that 74-yard scamper he ran untouched up the middle then bounced it down the left sideline to evade tacklers. That came with 10:30 remaining in the third making the score 35-7. That helped put the game out of reach, as Penn re-lived the score after the game.

‘Well, I just hit the hole,” he said. “Coach said to ‘lower your shoulders on the second level.’ I can’t really remember what happened. I was just reacting. I just saw a lane, and the rest was history.”

On the topic of Penn, coach Nate Tanner said the quarterback is “like a fine wine that just gets better with age.”

After Athens’ quarterback Joey Moore found Nate Trainer for a 4-yard touchdown to open the game, that’s when the Patriots woke up. Two of the next three scores came from Devin Gaines, as he rumbled for a 9-yard touchdown to tie the game at 7 apiece. His next score came after Penn already hit Jake Hogsett on a 30-yard touchdown with plenty of time to scramble and throw. Gaines’s second score from 9-yards out made the game 21-7, and it helped pad his stats with 82 yards on 19 carries.

The offensive attack of coach Nathan Tanner’s Southsiders has the team buzzing, and it’s easy to see why. They’re averaging 46.3 points per game, and that’s the most they’ve averaged in the first three games of a season since Mike DeVol’s 2003 Class AAA state champions averaged 51.6 through three contests. Tanner spoke of his team’s offensive output after the game.

“Our kids came out and executed and did what they needed to do,” Tanner said. “They’ve put in a lot of work, and it’s paying dividends.”

Penn liked what he saw on Friday night, as his offense is running smoothly so far.

“We can go a lot higher, but there are still some things we need to fix,” he said. “Defense-wise, we stepped up. First quarter, we weren’t really getting our groove on (during the opening drive), but then we finally got it and turned this game into a dub.”

The tandem of Jeffrey Tucker and Braxton Amos made AHS’s offensive line work to keep Moore safe, as they bullied everyone and opened gaps and stuffed runs throughout the contest. For Amos, his first year of playing football for the Patriots is turning heads. The regular 220-pound wrestler is the best in his weight class in the country, and before the game, he announced his intent to sign with the University of Wisconsin to take his wrestling career to the collegiate level. Coach Tanner talked about his impact on the game and how far his front four can take this team.

“I mean, Braxton is a world-class athlete,” Tanner said. “He’s the number one wrestler in the country. By the way, congrats to him on finally deciding where he’s going tonight by committing to Wisconsin. I’m so proud of him, and I can’t say enough about him. The game of football is won in the trenches. Whenever you’re doing that, it’s really, really tough. It kind of ensures victory.”

The victory sets the Patriots (3-0) up nicely to start the year, as they welcome Princeton Senior for a Friday clash in the Erickson at 7 p.m. The Bulldogs are off to their first 0-3 start since 2010, and they lick their wounds before preparing for next Friday’s homecoming game against Alexander at 7:30 p.m.