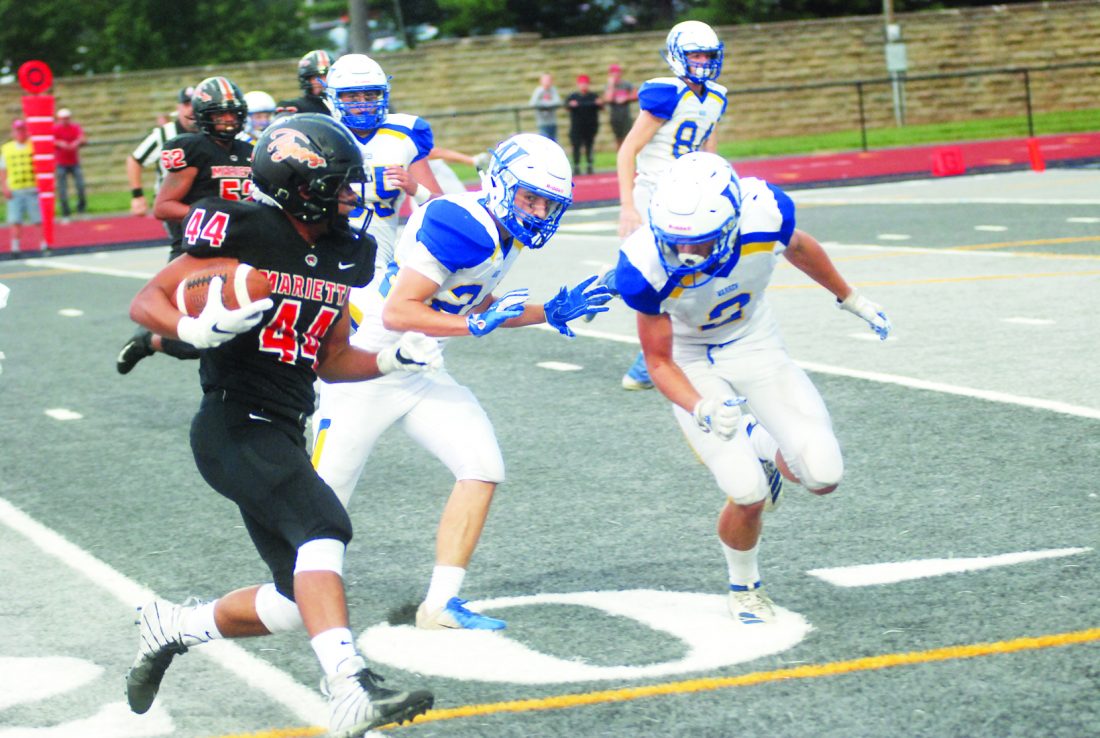 Both Marietta High and Ripley High will be seeking a bounce-back win.

The Jason Schob-coached Tigers (2-1) are scheduled to host the Eddie Smolder-led Vikings (1-2) of Jackson County, W.Va., in a prep football game at 7 p.m. Friday at Don Drumm Stadium on the campus of Marietta College.

Last Friday at DDS, MHS suffered a 34-7 setback to the Williamstown Yellowjackets, while RHS dropped a 28-26 decision at Riverside.

Marietta will need to exercise better ball security against Ripley if it is to be successful. Against Williamstown, the Tigers lost three fumbles to the Jackets.

“We were a part of the issue,” Schob said. “We had three turnovers in the first half.”

Offensively, MHS running back Chase Taylor is expected to get more touches in the backfield this week. After rushing for a single-game school-record 332 yards on 19 carries against Warren the week before, he only had nine totes of the pigskin versus Williamstown.

“We’ll have to be able to stop the run,” Smolder said. “We have to play hard and fast and swarm to the ball.”

The 6-foot-1, 190-pound Taylor did finish with eight catches for 80, mainly because the Tigers were in a catch-up mode and had to pass.

Against the Vikes, look for Taylor and the Tigers to run a lot of sweeps.

Corbin Alkire is the quarterback, and he’s mobile as the Vikings will learn soon enough. The southpaw-throwing senior also has a good arm, and will be looking for receivers’ Tony Munos, Cyrus Rhodes, and Cole Alkire.

Kory Science is another Tiger RB that Ripley will have to keep an eye on.

Doing the blocking on the line for Marietta will be Aaron Hiener, Carson Urban, Garrett Becker, Lincoln Bolton, and Jarrett Jackson.

Most of the aforementioned Tigers are expected to play on both sides of the football.

“We need to come together as a group, as a family and really make (last week’s loss) a learning moment and get better from it,” Schob said.

So far this season, Ripley’s has been up and down, lose one week, win another, lose last Friday. The Vikings are hoping to be on the upswing this week.

Last fall, RHS was Class AAA playoff-bound and finished with just two setbacks which it already has going into Week 4.

Ripley lost a tough one to Riverside, but a win against Marietta would certainly ease the pain somewhat.

“Didn’t end up the way we wanted it to,” Smolder said of the Riverside game. “The kids played hard and prepared well, just came up short. Give credit to Riverside.

“(Marietta’s) a good football team. It’s going to be a challenge. They have a lot of guys back. It was a tough game last year.”

The Vikes are primarily run-oriented with 5-8, 160-pound senior RB Dalton Myers and 5-11, 150-pound senior QB Noah Westfall doing most of the carrying. The duo combined for 202 rushing yards last Friday.

Smolder expressed how important Myers is to his team.

“He’s a good player,” the Ripley coach said. “He worked really hard in the offseason. He does a good job for us. He’s a senior leader.”

Another back the Tigers defense will have to be concerned with is the speedy 5-8, 145-pound Cameron Ramsey.

“Each week we set a goal to go 1-0,” Smolder said. “Marietta is our most important game because it’s our next game. We’re excited. I think it’s going to be a good game.”