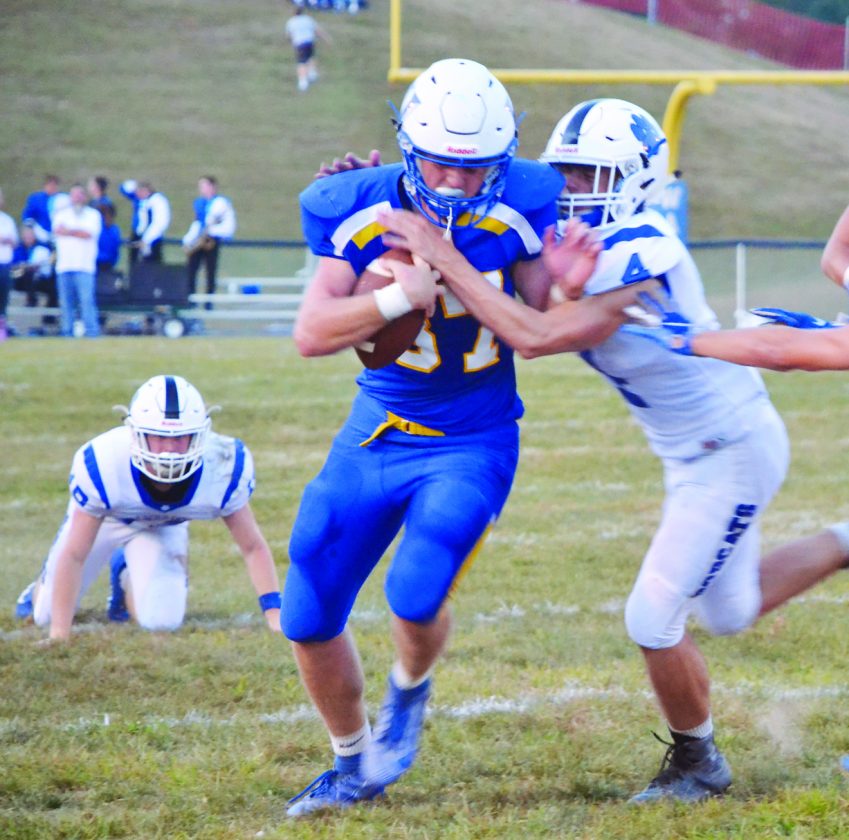 VINCENT — Warren appeared to have the visiting Cambridge Bobcats right where they wanted them at halftime of Friday night’s non-conference contest.

Unfortunately for first-year Warren head coach Matt Kimes and his Warriors, Cambridge scored 21 unanswered points in the second half to pull away to a 42-23 win.

Warren got three first half touchdown passes from junior quarterback Kurt Taylor and a 42-yard field goal as time expired in the first half by Joel Chevalier to take a 23-21 lead but would not be able to find the end zone from that point forward.

“We didn’t score at all in the second half and I thought we missed a bunch of opportunities all game long really,” said Kimes, whose team slipped to 2-2 with the loss. “We had a chance early to go up a couple of scores and didn’t execute but give credit to Cambridge. They just kept fighting.”

Things started out great for the home team as defensive lineman Dylan Keife caused a Cambridge fumble on the very first play from scrimmage and Evan Gandee recovered at the Bobcat 23-yard line.

Five plays later Taylor connected with tight end Josh Welch on a 7-yard touchdown pass to give the Big Blue a 6-0 lead.

Cambridge answered on their final possession of the first quarter when they put together a 6-play, 59-yard drive capped by an 11-yard pass from quarterback Cody Moore to Latrell Payton.

The Bobcats increased their lead to eight early in the second when TraVon Jeffrey plunged in from a yard out for a 14-6 lead.

WHS answered swiftly as they marched 62-yards on just seven plays with Taylor finding Gandee in the end zone for a 4-yard touchdown with 8:19 left in the half to cut the lead to 14-12.

The Warriors defense rose to the occasion on the next Cambridge possession as they forced a three-and-out to give their offense great good field position at the Cambridge 45-yard line.

Four players later Taylor was at it once again as he teamed with Thomas Miller on an 11-yard scoring toss, his third of the half and 15th of the young season.

Taylor converted the two-point conversion and the Warriors were back in front 20-14 with less than six minutes to play.

The resilient ‘Cats went right back to work as Jeffrey carried the rock seven times for 31 yards to lead a 65-yard drive that culminated in a 7-yard pass from Moore to Perkins to give Cambridge the lead once again with 2:16 to play in the half.

The Warren offense executed the two-minute drill to perfection and regained the lead when Joel Chevalier booted a 42-yard field goal as time expired to give the Warriors a two-point lead at the half.

After a Warrior drive to open the second half stalled when Taylor was intercepted in the end zone, the Bobcats put together their most impressive drive of the game when they marched 80-yards on 11-plays with Moore scrambling into the end zone on a 4-yard run to jump back in front 28-23.

Once again the Warriors moved the ball into Bobcat territory only to see their drive stall and turn the ball over on downs to the dangerous Cambridge offense.

Warren forced Cambridge into a third-and-one at their own 45-yard line but after appearing to be stopped by the Warrior defense, Jeffrey somehow broke free from several Warrior tacklers and raced 55-yards down the sidelines for a touchdown to give the ‘Cats a 12-point lead on the first play of the final quarter.

“That was a great effort by that kid (Jeffrey),” said Kimes. “We had multiple kids there trying to do the right thing and somehow he got free. I can’t fault our kids effort it was just a great play.”

As they did all night long, the Warriors moved the ball right back into Cambridge territory but after a completion from Taylor to Miller at the four-yard line, the ball popped free with Kaden Whaley recovering to ultimately put an end to Warren’s comeback bid.

“Our defense has been playing good all year and our offense is starting to pick up a little bit,” said Cambridge head coach Josh Lowery. “When we can play well in all three phases we can be pretty good.”

Jeffrey finished the game with 150 yards on 26 carries while Moore completed 9-of-15 pass attempts for 146 yards while rushing the ball 7 times for 77 more. Taylor put the ball in the air 53 times for Warren completing 34 for 338 yards.

“That’s too many…. We know as a staff that we have got to be more balanced,” said Kimes. “We just struggled to run the ball early. It’s not a scheme thing or an effort thing we just have got to continue to fight to get better.”

Gandee hauled in 12 pass receptions for a game-high 121 yards while Miller also eclipsed the 100-yard mark with 112 receiving yards on 8 catches. Cambridge improved to 2-2 as well with the win, one their head coach considers a quality one.

“The key for us was to be able to run the football,” said Lowery. “That’s a very good football team over there and they are going to win some football games.”

Warren will travel to Union Local next Friday night.