Williamstown gets defensive, runs past Ravenswood, 44-0 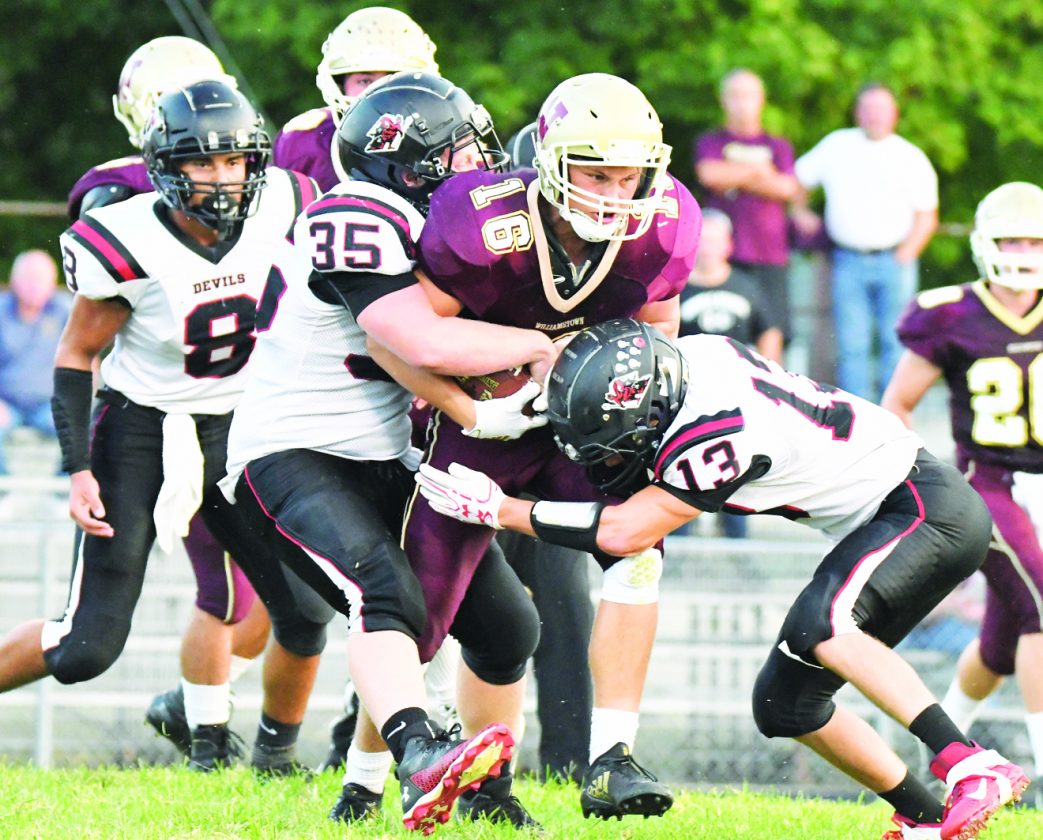 WILLIAMSTOWN — Jacob Modesitt opened the second half with a 5-yard scoop-and-score and it was all Williamstown after halftime here Friday night as the No. 8 Yellowjackets held Ravenswood to 68 total yards during a 44-0 blowout victory.

Ravenswood, which had five first downs on the night but only trailed 10-0 at halftime for head coach Eric Hupp, was limited to just 9 total yards after the break.

“Overall, our defense played really well,” said Modesitt, who picked up a rolling pigskin at the 5 and managed to keep his balance into the end zone when the Red Devils had a bad punt snap on their opening possession of the third quarter.

“I just went through the backfield and nobody really blocked me. I just went back there and did what I had to do and (Nick) Bondi helped me out a little bit.”

Josh Erb’s knuckleball field goal was good from 35 yards out at 6:49 of the first to give WHS head coach Terry Smith the only points they needed.

After a Brady Ankrom tackle for loss helped force a Red Devil punt on their next drive, RHS got the ball right back. That’s because Wayne Stephenson stripped Eric Brown after he hauled in a pass from Brayden Modesitt and Jaycob Creel pounced on it. Despite having the ball at the ‘Jacket 38, the WHS defense held.

Ravenswood’s Ben Queen had an interception in the second quarter, but the visitors were pinned deep and had to punt after getting a pair of first downs. Before intermission, the Yellowjackets marched 61 yards in less than 2 minutes with Brayden Modesitt scoring from the 1 with 9.5 ticks left for the 10-0 advantage.

“They (Ravenswood) played pretty well. I thought at least they played hard,” admitted coach Smith, who watched Modesitt hit 9 of 13 for 122 yards with Ty Moore going for a game-high 95 rushing yards on 15 totes. “They had a couple turnovers right there and unfortunately for Ravenswood you got to play a full game and our kids I thought they played pretty good in the second half.”

Following Jacob Modesitt’s second defensive six-pointer of the campaign, Moore broke free for a 33-yard TD gallop, but a holding call brought it back. Nonetheless, Brayden Modesitt hooked up with Mason Deem on a 24-yard touchdown pass. Nathan Moore blocked the PAT to keep it at 23-0 with 6:42 left in the third.

Moore added a 17-yard scoring jaunt less than 3 minutes later to make it 30-0. Following a Caden Tallman 44-yard punt which pinned RHS at its own 1, the Red Devils went for it on fourth-and-6 at their own 5, but didn’t make it. Following a hold, freshman T.J. Billingsley found a seam and raced 22 yards to paydirt for his first varsity touchdown. Stephenson, though, blocked the extra point to keep it at 36-0 with 7:46 to play. Sophomore tailback John Coleman added the final TD, as well as his first varsity score, of the evening from 9 yards out with 40.2 ticks to play. He also added the two-point conversion run.

“We think T.J. is going to be good and John, some days he has good days and bad days, but he was good tonight so I was happy with him,” coach Smith added. “Those guys work hard and it’s good they got in.”

Jacob Anthony led the visitors with 16 rushes for 42 yards. Billingsley finished with 42 yards on five attempts. Aside from Deem (4-51), Modesitt’s other completions went to Brown (3-58) and Bondi (2-13).

“We just had to band together and realize what we needed to get done and what we had to get done,” Jacob Modesitt said of the halftime mood. “We realized we came into the game big-headed and we have to stay humble. We can’t come in like that no more.”

The Yellowjackets improved to 3-1 and welcome in Buffalo for homecoming at 7 p.m. next week.

“We’ve got homecoming and that will be a big distraction,” Smith added. “But, you got to deal with it.”

Also of note, the two fan bases combined to donate $1,836 to the family of Roane County football player Alex Miller, who died last week after collapsing during a game at Clay County.