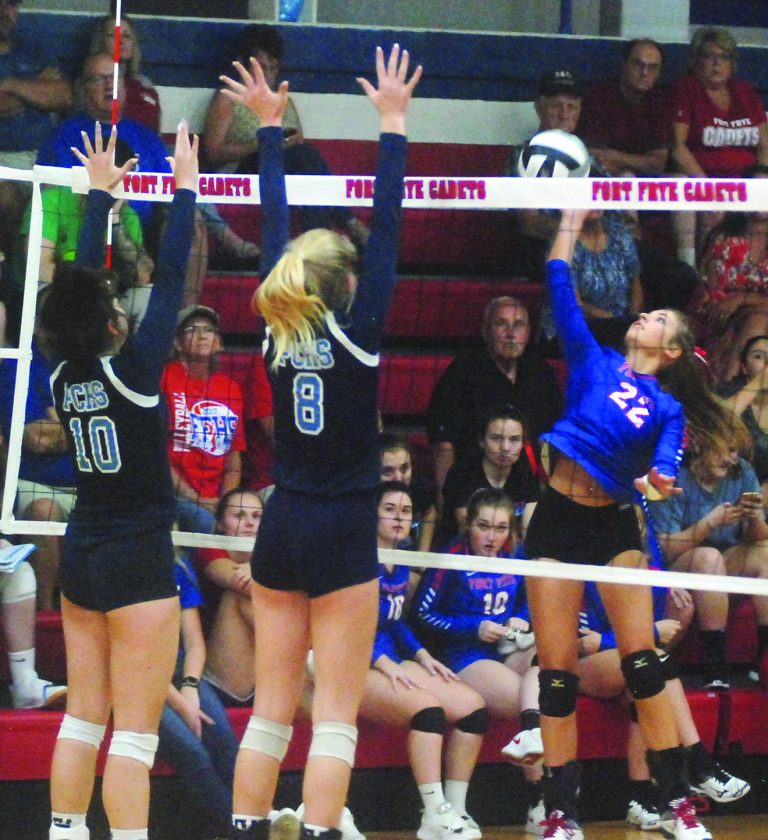 Fort Frye, which dropped to 13-6 and plays Wednesday at rival Waterford, led 17-13 in set four after Maddie Webb recorded consecutive downed spikes. However, Gracie Lowers later served for a pair of aces to push PCHS ahead 18-17.

The Cadets got a Cara McIntosh ace to go ahead 24-23 and the hosts had the serve up 25-24 and 26-25, but couldn’t finish. A kill by Madison Ross tied it at 26 and after a Cadet attack error with Grace Pedersen serving, she got the final tally of the set thanks to a Lainie Ross kill from a Jenna Boice assist.

A Webb downed spike via an assist by Stephanie Camden gave the Cadets their only lead of set five at 1-0. PCHS, which improved to 12-2-1 and competes Saturday in the Charleston Catholic Invitational, took the lead for good at 2-1 on a Beth Lowther kill. Leslie Huffman followed with a downed spike and after a Lowther/Lainie Ross double block it was 5-2.

Julia Zalmanek’s play at the net helped FFHS cut it to 7-6, but the hosts couldn’t get closer. Lowers, who had a match-high 12 digs, served for five straight to get the visitors to match point, which occurred when FFHS was called for being out of rotation.

“I’m very proud of them and the one thing that I’m proud of even though yes we were down a couple times, we are working on focusing on not getting down mentally,” said PCHS head coach Amanda Weatherwax, who watched Aaliyah Brunny put down a match-high 20 kills.

“In games like this it’s a mental game too, big time. I’m proud of them for keeping their mentality up and working together. They really pulled together tonight.”

Gilly Baker’s ace in the opening set gave the Cadets a 2-0 cushion as PCHS never led.

Set two was even at 18 until a Fort Frye service error. Consecutive tallies at the service line from Ari Nedeff later made it 23-19. Although the hosts fought back to within one at 23-22, Boice had consecutive kills to end it.

Camden served for nine straight in set three as the Cadets looked like they would roll. Her final point, which made it 16-6, came when Zalmanek blocked Boice, who was trying to tip the ball across the net following a bad pass. An ace by Cara McIntosh extended the advantage to 19-10, but PCHS continued to fight and closed to within 24-23 before McIntosh ended the set with a kill.

“We were hoping for this win,” admitted coach Ohrn, whose squad honored Webb, Camden and Baker along with PCHS seniors Lowers and Nedeff. “We came out strong in the first set and kind of battled back the second set.

“Overall, I thought we played good as a team. This is one of the better teams we’ve played. We were hustling a lot more than usual so that was good. Just a few missed serves here and there we’ve got to fix.”

PCHS finished the match with 16 service errors while the Cadets had 11, three of which came in set five.