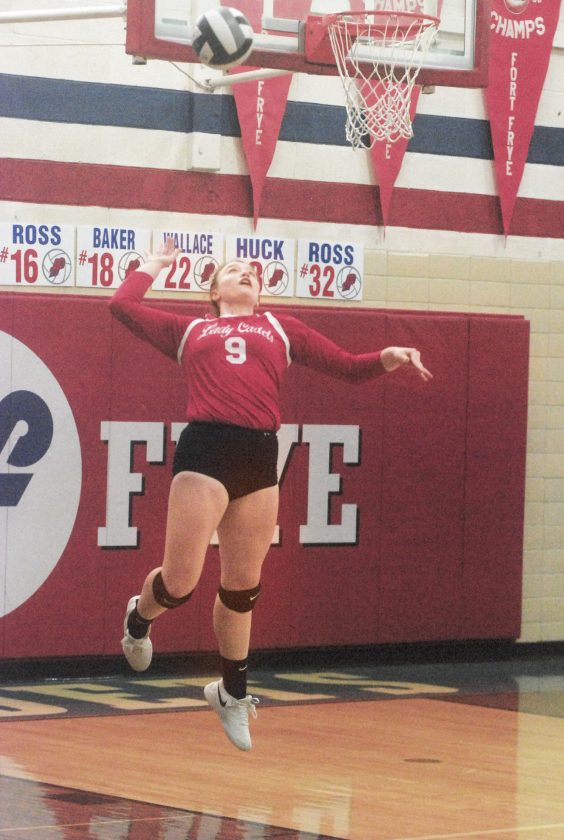 Improving to 16-6 on the year, Fort Frye had to earn the title of sectional champs, winning only one set by double-digits due to the Hornets style of play taking away the strengths of the Cadets.

“I always know that when we are not playing a team that is in system a lot that we’re going to struggle because we play the best when it’s pass, set, hit,” Ohrn said. “So we can do the same on our side. Sometimes we struggle to get things going with that, but I know that we’ll pull through and get it together.”

Coming off 16 kills in the opening game on Wednesday, hitter sophomore Julia Zalmanck was a presence at the net once again, finishing with a game-high 20 kills. Fellow senior hitter Maddi Webb also had double-digit kills with 12 and seven from junior Cara McIntosh.

It was another normal day at the office for the senior assist machine Steph Camden, once again finishing with a game-high 44 assists and a kill and seven digs.

“Julia has really progressed throughout the season and she’s really starting to come on towards the end when we needed her,” Ohrn later on Camden. “I thought that today was one of her best games, getting to the ball and putting the ball up in the air. She did a really well with getting those tight balls on the net.”

Neither Fort Frye or Malvern (10-14) could pull away from each in the opening part of the first set, it wasn’t until the Cadets went on a 12-2 run to end the first set winning 25-16.

During the stretch, Zalmanck scored five points and three kills all off dishes from Camden.

Fort Frye continued the momentum built from the previous set, running away from the Hornets winning 25-8 in the second.

The Cadets was able to keep rallies alive and found holes in the Hornets defense in part from Webb, Camden and Zalmanek juniors Jayden Greenleaf, Lexie Huck and McIntosh

The third and final set was a repeat of the first, Malvern jumped out to an early 4-0 lead and was leading 11-8 before coach Ohrn called a timeout. That was the Hornets finally lead of the season, as Fort Frye went on a 25-7 run to end the set.

Fort Frye had 14 aces, four from Webb and three each from Huck and senior Gilly Baker.