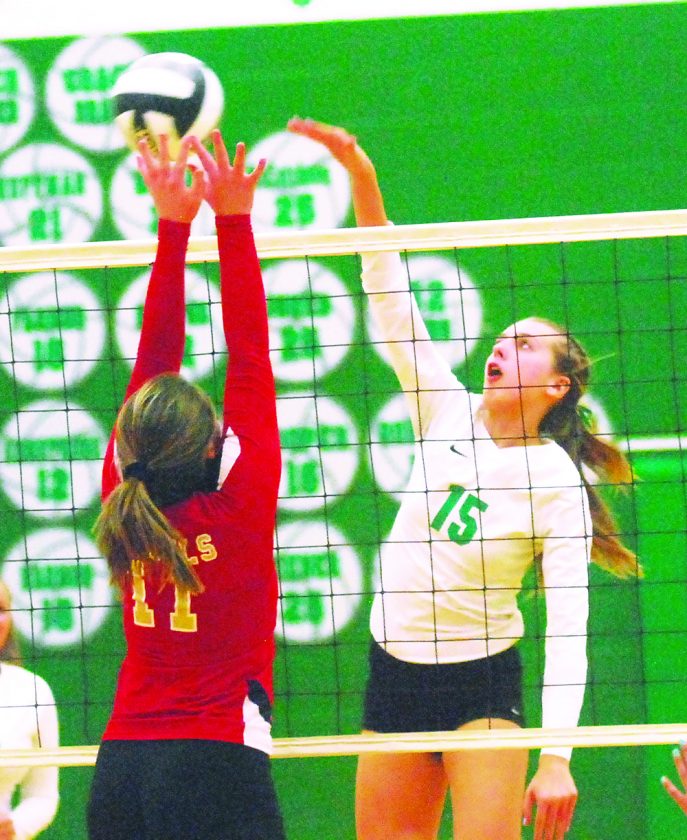 Photo by Jordan Holland Waterford’s Kaylea Harmon (15) goes up to spike the ball during a high school volleyball sectional tournament match against South Gallia Thursday at the Harry Cooper Annex.

WATERFORD — Cara Taylor had no idea how close she was to notching her 1,000th career assist.

She entered Thursday’s Division IV sectional final volleyball match against South Gallia 17 assists shy of the century mark. Taylor got her 17th dime of the night midway through the second set, reaching 1,000 as just a sophomore and leading the Wildcats to 25-9, 25-10, 25-10 sweep of the Rebels.

“It was a big surprise,” said Taylor, also a basketball and softball standout.

“Every day going in and practicing, you have to rely on the passers, rely on your hitters. Couldn’t have done it without them.”

Waterford’s goal this season was to win the Tri-Valley Conference Hocking Division title. After accomplishing that goal late in the regular season, the Wildcats focused on a new goal Thursday.

“We talked a lot in practice about playing with a purpose,” said Waterford head coach Kim Barker. “Up until this point our purpose was to win a TVC title, and they did that. I said now we’ve got to focus on our next purpose and tonight was the sectional title.

“Usually our set ones are a little sloppy, but they were just on fire. They had a lot of purpose tonight.”

Early on, Riley Schweikert recorded a kill and a pair of aces while Kaylea Harmon added a kill and a block to help the Wildcats jump put to an 11-2 lead in the first set. The Rebels pulled within 17-8, but Lily Roberts, Harmon and Schweikert notched consecutive kills to build a 20-8 advantage. A pair of Harmon kills and an ace by Taylor put the first set out of reach.

Waterford came out hot in the second set, too. Jumping out to a 6-1 lead, Taylor assisted Harmon on five straight kills to make it 11-1. That prompted a South Gallia timeout, during which Taylor was recognized for her milestone.

“It’s a phenomenal accomplishment,” said Barker, whose team improved to 15-8. “Cara is really the center of this team. She’s the glue. It’s a huge accomplishment.”

The lead stretched to 13-1 before South Gallia tallied four of the next five points to make it 14-5. Waterford fired back, as back-to-back aces by Harmon made it 17-5 and a kill by Roberts made it 18-5. In fitting fashion, the set ended when Taylor assisted Harmon on a kill to put the ‘Cats up 2-0 in the match.

“Coach has been really telling us to hit the middles,” Taylor said. “They’ve been working really good for us this season.”

The third set was more of the same, as Waterford proved too much for the visitors. Alyssa Doak’s kill gave the Wildcats a 9-2 advantage before six straight points and five aces by Harmon stretched it to 15-2. Roberts’ block and Jazmine Farmer’s ace put WHS up 20-3. A pair of aces by South Gallia’s Emma Shamblin got the Rebels within 14, 24-10, but Waterford slammed the door to claim the sectional crown.

Harmon led the way with 15 kills and nine aces. Taylor had a match-high 26 assists.

“Kaylea had a great game,” Barker said. “She’s been one of our go-to players. She’s been doing everything we’ve asked of her.”

Waterford now will set its sights on the district semifinals Wednesday at Jackson High School. The Wildcats will face the winner of Latham Western and Beaver Eastern at 7 p.m.