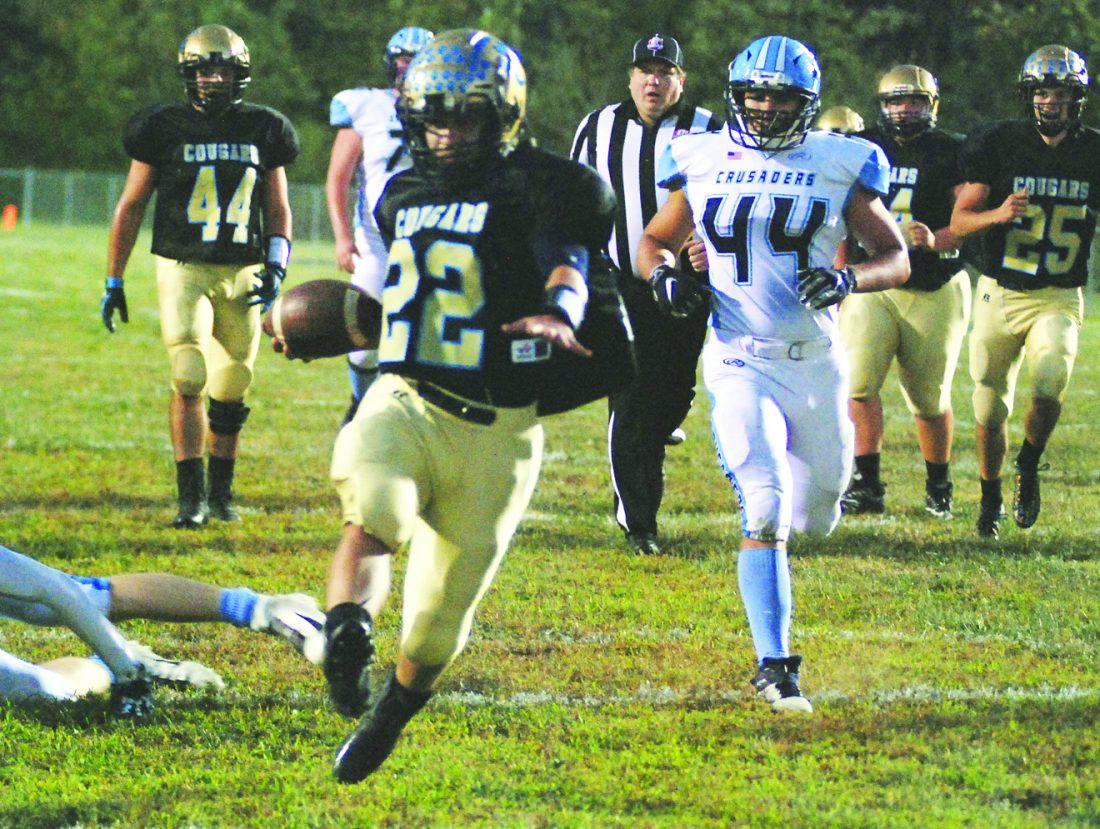 NEW MATAMORAS –A Friday night thriller in New Matamoras went down to the wire, as Parkersburg Catholic pulled out a 36-33 win on the road over Frontier.

A couple late lead changes put this game up in the air for anyone to take.

For Jeb Boice and Ethan Lang, they took it with the most dramatic of endings. At one time, the visiting Crusaders were cruising up 29-13 in the third, but touchdown runs from Joel Lewis helped the Cougars claw back into the contest. With 10:37 left in the game, his 5-yard score paired with a two-point conversion had PC clinging to a 29-27 lead. After a 62-yard touchdown pass from J.D. Schmidt to Breckin Hoff gave the Cougars their first lead since going up 7-0 on the second drive of the contest.

As Parkersburg Catholic got the ball at its own 45, a 5-yard Boice carry set up a touchdown pass from Boice to Lang (who tallied three scores through the game) to take the lead for good with 2:59 to go. That 60-yarder came on an audible from Boice, and Lang caught it down the middle of the field with no one in sight. Even though Schmidt and the Cougars had a chance late to win it, Kaylb McQueary couldn’t come down with a touchdown guarded by Nick Stricker. That drama sent the Catholic sideline ablaze, as players dumped Gatorade on head coach Lance Binegar at the game’s conclusion.

“Yes, they sure did,” Binegar said of the players giving him that bath. “That was my first one at Catholic. That’s awesome. To be honest, Lang’s about 9-feet tall and he went up and got it.”

On the loss, Frontier’s Russ Morris congratulated his opponents and talked about the fight of his team coming back from 16-down in the third.

“We fought back to go ahead. You know, it’s a tough loss. Football team’s are playing, and somebody has to win,” he said. “I’m very proud of the effort our kids gave, and they didn’t give up.”

The setback was the first of the season for Frontier (5-1) and Parkersburg Catholic makes things interesting in West Virginia’s Class A at 4-2. After the game, Boice spoke of the team’s fight and all the things to look forward to in the coming weeks.

“(Frontier) coming in at 5-0, they already have momentum,” he said. “We’re coming off two wins in a row, and there was no excuse for that start. This win woke us up, and we’re starting to go.”

Frontier goes to Caldwell for a 7 p.m. meeting next Friday, as every win counts, at this point. Parkersburg Catholic goes into next Friday, as a date with Calhoun County awaits them.